The Transportation Safety Board on overruns, RESAs and progress 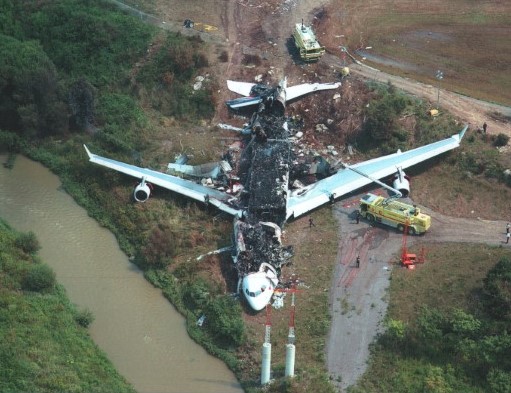 In August 2005, Air France Flight 358 overshot runway 24L at Toronto Pearson International Airport. All 297 passengers and 12 crew members successfully evacuated the aircraft before it was engulfed in flames. (Photo provided by TSB)

Between 2013 and 2018, an average of nine overrun accidents and incidents took place annually in Canada. Although thousands of aircraft seamlessly touch down across the country every day, in 2005 an Air France flight left a sobering reminder of what can happen when landing conditions are less than ideal. What have we learned from this accident? And what is left to be done?

The Miracle of Runway 24L
In August 2005, Air France 358, an Airbus A340-313, left Paris for Lester B. Pearson International Airport in Toronto, Ontario, with 297 passengers and 12 crewmembers on board. The pre-flight inspection had been performed, and the crew received the Toronto weather before departure. Thunderstorms were forecast for arrival.

On final approach, the crew received a report from an aircraft ahead of them: heavy precipitation was causing the runway to have poor traction. Approximately 320 feet above the ground, the pilots retook manual control of the aircraft for landing. They crossed the threshold of Runway 24L 40 feet above the glide slope. Due to poor visibility, they could not visually gauge where they were over the runway. They landed 3,800 feet down the 9,000-foot runway, well past the 1,000-foot touchdown zone. Unable to stop in time, the aircraft slid off the far end at a speed of 80 knots and skidded into a ravine just beyond the runway. A fire broke out, forcing the passengers to evacuate the aircraft as quickly as possible. Two crewmembers and 10 passengers were seriously injured, and the plane was destroyed, engulfed by the flames.

Recommendations
In concluding its investigation in 2007, the TSB made seven recommendations to regulators – two to France’s Direction générale de l’aviation civile and five to Transport Canada. Three of those five are still active and on the TSB’s Watchlist, a biennial list featuring key safety issues in the transportation industry. Those recommendations call on Transport Canada to:

In early 2019, the Board reassessed the actions taken on these recommendations. While there has been progress in establishing a margin of error for landing in deteriorating weather, the efforts to establish clear standards for approaches and landings in convective weather were determined to be unsatisfactory. Moreover, the progress on RESAs remains “Satisfactory in Part.” This is not good enough. Why after 12 years has it taken so long to make so little progress? Along with runway overruns, slow progress on addressing TSB recommendations is an issue on the Watchlist. Regulatory actions to fix high-risk safety problems, like overruns, have been too few and too slow.

With respect to RESAs, there is still no requirement in Canada for runways to meet international standards and recommended practices. Although the regulator published a proposal in 2016 to introduce measures that would address the risk of runway overruns at selected airports, these do not address the underlying safety deficiency that gave rise to the TSB’s recommendation. As a result, the terrain beyond the end of many runways in Canada could contribute to aircraft damage and injuries to passengers and crew in the event of an accident.

Since the Air France occurrence in 2005, there have been 141 occurrences in Canada involving runway overruns, 20 of which have been the subject of a comprehensive TSB investigation. Last year’s occurrence in Halifax reminds us once more of the risks and potentially devastating consequences when there is no adequate RESA or suitable arresting material. In the early morning of November 7, 2018, a Sky Lease Cargo Boeing 747 overran Runway 14 at Stanfield International Airport, coming to a stop 210 metres off the end of the runway, and 50 metres from a fence separating the airfield from a public road. The aircraft was substantially damaged and four crew members were taken to hospital for their injuries.

Actions required
To mitigate the risk of overruns, operators of airports with runways longer than 1,800 metres must conduct formal runway-specific risk assessments and take appropriate action. In addition, the regulator must adopt at least the ICAO standard for RESAs, or a means of stopping aircraft that provides an equivalent level of safety. Until then, the risk to aircraft, crews, and passengers will remain.

Kathy Fox is Chair of the Transportation Safety Board of Canada.