Fixed-wing firefighters of the sky. 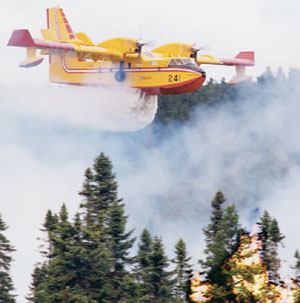 Smoking can be an expensive habit, and in the case of one Canadian, it
resulted in the mobilization of millions of dollars of firefighting
aircraft during the summer of 2003. The cigarette of a Barriere, BC
resident started a blaze that cost the provincial government $31
million to fight. The conflagration destroyed 260 sq. km. of forests,
75 homes, 150 buildings and four businesses, including a major sawmill.

Although
some forest and brush fires are started by people, most are ignited by
lightning. From 1995 to 2005, there were 82,801 reported wild land
fires in Canada, which burned a total of 26,854,351 hectares, an area
roughly equal to New Zealand. This country has about 417 million
hectares of forestland. To minimize the destruction caused by wild land
fires each year, aviation resources are deployed across the country,
and at times, to the US and other nations. Companies such as Conair of
Abbotsford, B.C. have exported their aerial firefighting expertise and
technology, and foreign delegations have visited provincial forest
services to learn how to fight wild land fires more effectively.

The
history of using aircraft to fight forest fires dates back to 1918 when
the BC government contracted a company to build a Curtiss H-2 flying
boat to fly fire patrols. Testing was started in August of that year,
but during one test flight the H-2 crashed and was destroyed. Because
thousands of voters watched the airplane fall out of the sky, the
politicians of the day decided to discontinue the project.

However,
after the First World War there were surplus military aircraft and
airmen returning from Europe still eager to fly. Given the successes
during the war of airborne intelligence gathering, it was recognized
that aircraft could be used to detect fires in Canada’s vast
hinterland. On Sept. 27, 1919, the Victoria Times published a news
report about a private pilot who spotted a forest fire while flying
over Duncan, BC. He landed and reported the fire’s location to a
ranger, who mustered men and equipment to extinguish the blaze.

For
many years, seaplanes such as the Vickers Vedette Flying Boat and de
Havilland Tiger Moth on floats were used for fire patrols. With
innumerable lakes and rivers in the Canadian bush and thousands of
miles of coastline, seaplanes could take off and land in regions where
there were no airstrips. Landbased fire patrol aircraft operated by the
Royal Canadian Air Force in the 1920s included the DH-4, DH-9 and Avro
504.

Starting in the mid-1930s, the Noorduyn Norseman operated
in Canada’s wilderness in support of forest firefighting, and was
joined 13 years later by the de Havilland Beaver, which could take-off
heavily loaded from small lakes thanks to its STOL capability. Both the
Norseman and Beaver were used to transport equipment and firefighters
across the country’s forested regions.

In August 1945, a
Norseman equipped with water pickup and bombing controls was used to
attack a fire near Temagami, ON. A few years later, 5-gallon waterproof
bags of water were dumped through the camera hatch of an Ontario
Provincial Air Service Beaver (with no appreciable effect on the fire).

Today,
high-wing airplanes such as Cessna 337 Skymasters and C182 Skylanes are
used for fire patrols, and aircraft like the Convair 580 shuttle
firefighters to airports where air tanker groups are based. Cessna
Caravans and other cargo airplanes bring in support equipment and
supplies. During the fire season, aircraft, pilots and other personnel
are moved around to help battle blazes that have become too large for
provincial or territorial resources. At the beginning of the season,
air tanker groups are deployed to forward bases. A group is comprised
of birddog and tanker aircraft, and during firefighting operations they
are assisted by helicopters with tanks underneath or suspended water
buckets.

The term “bird-dog” originated with the US Army. In the
late 1940s, it started using the single-engine Cessna 305 for liaison
duties, and created the name “bird-dog” for the rugged, little
airplane. The C305 was also used by the US Forest Service for wild land
fire patrols and other operations. “Bird-dog” has been applied to
fixed-wing aircraft involved in the coordination of aerial firefighting
ever since.

The initial attack on a forest fire begins with the
forest service coordination centre notifying a tanker group to launch.
The first aircraft from the group to take off is the bird-dog; onboard
is the pilot and a forest service Air Attack Officer (AAO). As the
birddog approaches the fire, the AAO conducts an initial assessment.
The pilot then flies orbits at 1,500 to 2,000 feet AGL, allowing the
AAO to better assess the fire, develop an attack strategy, look for
structures and hazards and select the first target and bombing run
direction. The bird-dog then descends to about 150 feet above the trees
to conduct an inspection of the tankers run. The bird-dog team checks
for hydro lines, rises in terrain,d. and other hazards, and notes the
turbulence and visibility on the approach to the fire and over it. This
information is then communicated to the tanker pilots.

After the
bird-dog departs, the amphibious tankers (where used) take off and head
toward a body of water to fill their internal tanks. The time required
to do so depends on the aircraft. For example, the Canadair water
bomber takes about 10 to 12 seconds. The water is mixed with a
concentrate that creates a fire-suppressing foam. Land-based tanker
aircraft are often filled with a red chemical retardant, which acts
longer than the foam.

When a wild land fire is
larger (> 5 hectares), airspace management becomes increasingly
complex and different tactics are used. The preferred tactic is
crosswindbombing runs across the head of the fire to stop its advance.
Low visibility in smoke and turbulence from the heat may make crosswind
runs impossible, in which case the air attack starts at the rear of the
fire and works up its flanks to cut off the head.

Bird-dog
aircraft include the Cessna 310, Piper Aerostar and Rockwell Turbo
Commander. Some are equipped with Forward Looking InfraRed (FLIR),
which allows the AAO to see through the smoke and better determine the
size of the fire and direction of its advance. Onboard systems record
FLIR and video images and transmit data about the fire to base.
Amphibious tankers used in Canada are the Air Tractor AT-802F Fireboss,
Canadair CL-215, -215T, and -415, and the four-engine Mighty Martin
Mars. Total water tank capacity ranges from 2,498 to 27,276 litres.
Land-based tankers include the Convair CV580/A and CV5800, Douglas DC-6
and B-26 Invader, Turbo Firecat (a modified Tracker aircraft with PT6A
engines), and the L-188 Electra (modified to air tanker).

The
national tanker fleet consists of 13 CL-215s, which are operated by the
provinces on behalf of the country. In the mid-1980s, six provinces and
the federal government bought 29 CL- 215s and created the Cooperative
Supply Agreement to govern sharing of the fleet. The CL-215 was
designed in the 1960s and has two radial engines. In the 1980s, 17
CL-215s were modified with turboprop engines and redesignated as –
215Ts. The CL-415, which first flew in December 1993, is the latest
generation of multi-role, amphibious aircraft and has an
air-conditioned, EFIS-equipped cockpit.

Coordination of aerial
firefighting resources between the provinces and territories, and
Canada and other nations, is done by the Canadian Interagency Forest
Fire Centre in Winnipeg. Within Canada, aircraft, personnel, and
equipment are shared under the Canadian Interagency Mutual Aid
Resources Sharing Agreement. Between this country and our neighbour,
the Canada/US Reciprocal Forest Fire Fighting Arrangement allows for
aerial firefighting resources to be quickly deployed in either country
as needed.

In
July 2003, a Lockheed L-188 Electra air tanker struck the side of a
ridge in southern B.C. and exploded on impact. In Alberta in May 2001,
a Cessna T310Q birddog aircraft was manoeuvring at low altitude,
probably stalled (according to the TSB), and crashed into the trees.
The pilot and AAO died. Flying relatively slow and very low over fires,
doing several bombing runs each day, turning in mountainous valleys,
and flying many hours daily during the fire season makes aerial
firefighting quite challenging.

Thousands of Canadians owe a
debt of gratitude to the aerial firefighting professionals whose
efforts have saved their homes, businesses and livelihoods. Let’s not
add to their workload by accidentally starting a forest or brush fire
this summer.