The Department of National Defence released a video still of a single bird (highlighted by the red circle) near the engine intake during the aircraft’s post take-off phase. (Photo: National Defence)

With the release of its report, National Defence included a still image taken from a video of the CT-114 Tutor that was involved in the accident. The video still shows a single bird near the engine intake during what National Defence describes as the critical post take-off phase from Kamloops Airport.

The preliminary findings, officially described as a From the Investigator (FTI) report, is produced by the Department of National Defence’s Airworthiness Investigative Authority. An FTI report is a brief summary of the circumstances and factual information known, indicating the areas of focus for the investigation, but does not provide the full details surrounding an accident.

National Defence explains its flight safety investigation will focus on environmental factors, including the bird strike, and the performance of the escape system, as is the case in all accidents involving ejections. Both MacDougall and Casey ejected from the CT-114 Tutor, but early reports indicate this was an unfavourable horizontal or similar ejection.

“Our thoughts remain with Captain Jenn Casey’s family, the Snowbirds, and the Public Affairs Branch,” said Lieutenant General Al Meinzinger, Commander Royal Canadian Air Force. “I’m relieved to see that Captain Richard MacDougall has returned home and we wish him well in his continued recovery. To the City of Kamloops, the first responders, and the surrounding communities, you have shown our RCAF family the goodness of your hearts. We will not forget your support and kindness – my sincerest thanks.” 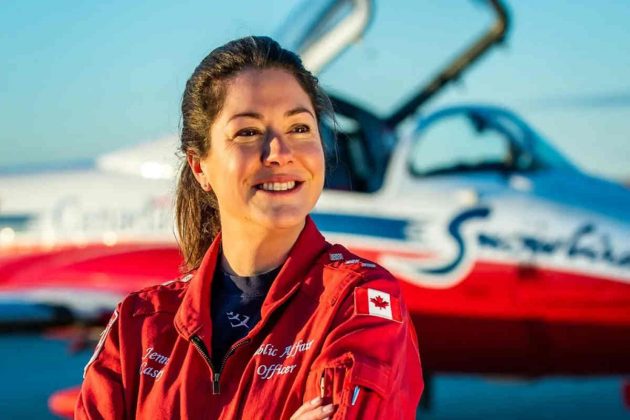 The Canadian Forces Snowbirds were deployed on Operation INSPIRATION, a cross-Canada tour to lift the spirits of Canadians and salute front-line workers during the COVID-19 pandemic, when the May 17 accident took place.

“During any Flight Safety investigation, we focus on completing a thorough, accurate and professional investigation,” said Colonel John Alexander, Director of Flight Safety and Department of National Defence’s Airworthiness Investigative Authority. “While we might quickly understand what happened in an accident, the most difficult work of an investigation begins as we peel back the layers to understand why and how this happened.”

The CT-114 Tutor fleet, which was originally procured in the mid-1960s to train student pilots and then later modified for the needs of the Snowbirds, has been on an operational pause since the accident occurred. The 431 Squadron comprising the Snowbirds demonstration team are based out of 15 Wing Moose Jaw, Saskatchewan. The aircraft involved in the accident is still in Kamloops.

Captain Casey was from Halifax, Nova Scotia, and joined the Canadian Armed Forces (CAF) in August 2014 as a direct entry officer. She previously spent several years working in broadcast radio as a reporter, anchor and producer in both Halifax and Belleville, Ontario. Her first CAF assignment as a public affairs officer was at 8 Wing Trenton, described as the RCAF’s home of air mobility. Casey spent the 2018 season with the CF-18 Demo Team, travelling across North America and the United Kingdom with the NORAD 60 jet. She then joined the Canadian Forces Snowbirds in November 2018.