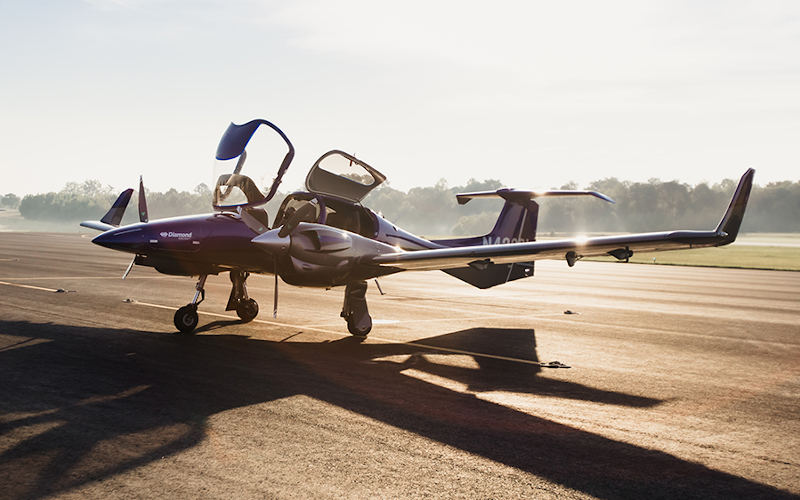 Diamond Aircraft had 45 shipments in the first quarter of 2021, according to GAMA's report, including 18 DA40 and 13 DA42 aircraft. (Photo: Diamond Aircraft)

Blue Line Aviation, a flight training provider based in North Carolina, signed a firm order for 50 aircraft from Diamond Aircraft Industries Inc., including single engine DA40 NG’s, twin engine DA42-VI’s and a Diamond Simulator, with an option for up to 50 additional aircraft.

Blue Line celebrated its eight-year anniversary less than a year ago, when it acquired a new Diamond DA40 NG, and currently holds a fleet of 16 aircraft, including 10 DA40 NGs and two DA42-VIs.

“The timing of this aircraft order marks a significant milestone for Blue Line Aviation,” said Scott McFadzean, CEO of Diamond Aircraft Industries Inc., “We have followed the tremendous growth of this operation very closely and are impressed with their laser focused vision towards the future during this pandemic, which has caused a drastic shift in short-term pilot demand in the industry.”

“I’m thankful to everyone that has played a part in making Blue Line what it is today. We couldn’t have done it without the hard work of our staff, students, and friends at Diamond Aircraft,” said Trey Walters, CEO and Founder of Blue Line Aviation. “Currently, we train approximately 40 full time students at a time in our 5 1/2-month career pilot course. We expect to triple that, or more, with the new aircraft and recently announced full student financing.”