Oct. 10, 2014, Miami, Fla. - The earliest prototype of the Boeing 707, forerunner to the family of modern jetliners, was first flown in 1954, 60 years ago this year.  In its time, this mid-sized, long range, narrow bodied four engine jet aircraft was commonly known as the “Seven Oh Seven” of the skies. 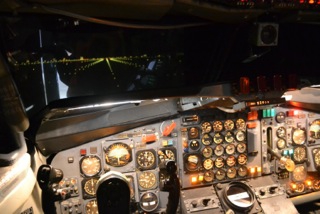 By the late 1950s and into the 1960s the 707 became the most popular jetliner of the era. Its popularity led to rapid developments in airport terminals, runways, airline catering, baggage handling, reservations systems, and other air transport infrastructure. The advent of the 707 also led to the upgrading of air traffic control systems to prevent interference with military jet operations.

Pan American World Airways was the first airline to operate the 707; the carrier inaugurated 707 service with a christening at National Airport on October 17, 1958, attended by President Eisenhower.

There are still a number of B-707s flying today, all flown by private individuals or governments.  Pan Am International Flight Academy, the original training division of Pan Am continues to offer training on their Boeing 707 simulator located at the company’s Miami world headquarters.  The Academy offers the last FAA approved training courses and sees a variety of customers including heads of state and celebrities.