March 6, 2009, Pittsburgh, PA - Boeing Co. has reported a dramatic drop in orders for its freight and passenger jets in February. 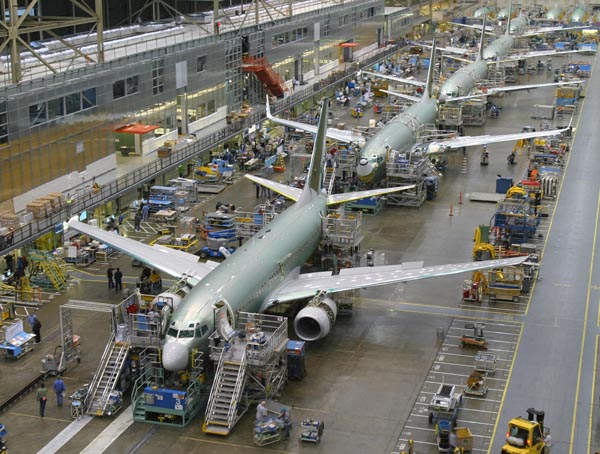 March 6, 2009, Pittsburgh, PA – Boeing Co. has reported a dramatic drop in
orders for its freight and passenger jets in February.

Orders for Boeing's commercial planes fell to
just four last month, down from 125 during February of last year,
according to figures posted on its website.

As the recession deepens, airlines are cutting flights and some
U.S. carriers have delayed orders or deliveries of new jets.
Borrowing to buy new planes is also tougher as banks remain leery of
lending money at a time when markets are volatile and many companies
are struggling.

This week, a succession of airlines reported substantially lower
traffic in February from a year earlier as consumers and businesses
scaled back their trips. The declines reached double digits at
American Airlines, United Airlines, Continental Airlines Inc. and
AirTran Holdings Inc.

The carriers already were cutting capacity – by nearly one-sixth
at United and one-tenth at American compared with February 2008 –
which means they needed fewer planes than they did a year ago. And
traffic is still falling faster than the airlines can mothball
planes.

Last month, Boeing said the backlog had grown eight per cent in
2008 and consisted of more than 3,700 planes worth a record US$352
billion. Most of its orders are from internationally based carriers.

"The question is how much of the existing backlog is going to be
able to be financed by the airlines in the current credit market,''
said Michael Derchin, an analyst at FTN Midwest Securities.

Boeing's February orders included requests for three 777-300ERs –
one from Air New Zealand and two from an unidentified customer or
customers – and one 737-800 from Alaska Airlines. Boeing also said
it delivered 36 jets last month compared with 39 a year earlier.

The company has said it expects to deliver 480 to 485 airplanes
this year, up from 375 last year.

Meanwhile, the U.S. Commerce Department said Thursday that orders
to U.S. factories fell for a record sixth straight month in January
as demand declined across a wide cross-section of industries. Orders
for durable goods, items ranging from planes to refrigerators,
dropped by 4.5 per cent that month.

In January, Boeing reported a surprise loss for the fourth
quarter of 2008 and announced plans to cut 10,000 jobs, including
4,500 positions at its Seattle-based commercial jet business and
5,500 positions in other parts of the company, including its defence
division, which accounts for roughly half Boeing's revenue.

Boeing's output tumbled late last year because of an eight-week
strike and lingering production problems with some of its aircraft.