Dec. 12, 2008, Chicago, IL - Boeing Co. has further delayed the initial test flight and delivery of its highly anticipated 787 jetliner, citing the impact of a recent strike and lingering production problems. 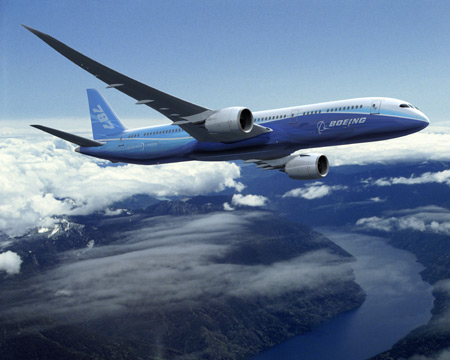 Dec. 12, 2008, Chicago, IL – Boeing Co. has further delayed the initial test flight and
delivery of its highly anticipated 787 jetliner, citing the impact
of a recent strike and lingering production problems.

The Chicago-based aerospace company said Thursday it was pushing
back the inaugural flight of the next-generation passenger jet to
the second quarter of 2009 and the first delivery to between January
and March of 2010.

The delay put the planned delivery of the first 787 nearly two
years behind the original schedule and was the latest in a series of
setbacks for the plane, touted for its potential to offer higher
fuel efficiency than other large jets due to its construction fro
lightweight carbon fibre composite parts.

Also Thursday, Boeing said it was restructuring its commercia
aircraft operations to improve plane development and production, as
it strengthens oversight of its global supply chain.

Shares of the company slid US$1.41, or 3.4 per cent, to close at
$40.27 on Thursday. Boeing stock has lost more than half its value
since the beginning of the year.

The strike, which ended early last month, forced Boeing to close
its commercial aircraft factories in the Seattle area and cost the
company an estimated $100 million per day in deferred revenue.

In November, Boeing said it was postponing the first 787 test
flight – delayed four times previously from its original target of
August or September of 2007 – until next year because of the strike.
It had been scheduled for the fourth quarter of this year, with the
first delivery slated for the third quarter of 2009.

"Our industry team has made progress with structural testing,
systems hardware qualification, and production, but we must adjust
our schedule for these two unexpected disruptions,'' Scott Carson,
president and chief executive of Boeing Commercial Airplanes, said
in a statement.

Boeing said it was evaluating the delay's impact on deliveries
and will provide customers with updated schedules. It also said it
was determining the financial impact and would incorporate that into
guidance to be released later.

Even before the strike, the 787 had been hampered by lengthy
delays caused by production troubles partly due to a reliance on
outside suppliers. Boeing has lost credibility, and billions of
dollars in expected additional costs and penalties, as a result.

The 787, Boeing's first newly designed jet since airlines started
flying the 777 in 1995, will be the world's first large commercial
airplane made mostly of carbon-fibre composites. Boeing also makes
737, 747, 767 and 777 jetliners.

Boeing, the world's second-largest commercial airplane maker
after Europe's Airbus, has about 900 orders for 787s, with Japan's
All Nippon Airways Co. the first customer scheduled to receive one
of the planes.

At a meeting of airline executives in Chicago on Thursday, All
Nippon Airways' president and chief executive, Mineo Yamamoto, said
the 787's latest delay was “very regrettable.''

"They were supposed to be in operation by now,'' he said,
through a translator, noting that the airline originally was
scheduled to get its first 787 in May.

Yamamoto, who has a 787 logo on his business card, said he
expects the plane to be 20 per cent more fuel efficient than the
767s currently flown by the airline, "so we cannot enjoy the cost
reduction which would have been brought by the 787.''

All Nippon Airways negotiated penalty payments with Boeing for
manufacturing delays before the recent labour standoff, but the
agreement doesn't cover the strike, he said.

The delay came as little surprise to industry analysts and
followed media reports that 787 schedule revisions were in the
offing.

Richard Aboulafia, an industry analyst with the Virginia-based
Teal Group, said: "The only thing worse than the delays has been
the level of secrecy and uncertainty that surrounded this program.''

Howard Rubel, an analyst with Jefferies & Co., said the delay was
a result of the strike and poor workmanship by a subcontractor,
“and it just takes time to put fasteners back in properly.''

"It's not a case of anything harder or more complicated than
that,'' he said.