Chris Ferguson, who led the final mission of America’s Space Shuttle Program, will return to the International Space Station as a commercial test pilot of the Boeing CST-100 Starliner spacecraft. Starliner is being developed in collaboration with NASA’s Commercial Crew Program, a partnership between NASA and the aerospace industry. The spacecraft is designed to transport passengers and cargo to and from low-Earth orbit. 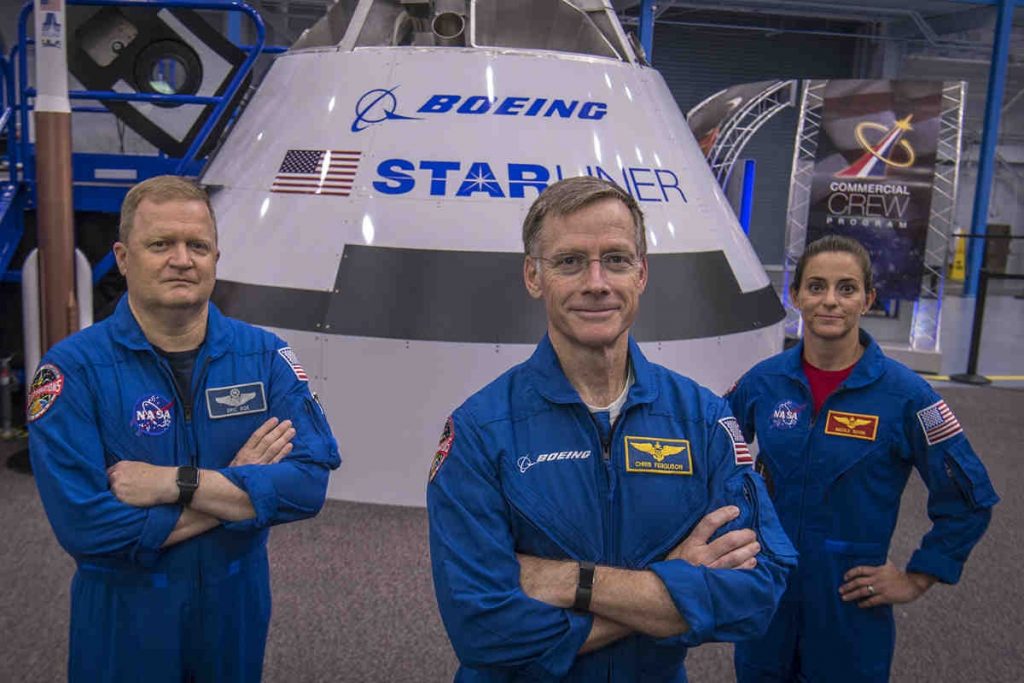 When it retired the space shuttle program seven years ago, NASA signalled the start of a new era in the commercialization of low-Earth orbit missions. NASA is working on its own ambitious Space Launch System, leveraging the Orion Spacecraft, for carrying heavier loads and exploring further out in the solar system, as private and public enterprises initially focus on newly available contracts for low-Earth orbit delivery vehicles.

The Commercial Crew Program was largely initiated so the U.S. could eventually avoid using the Russian Soyuz rocket, which is currently the only option for sending astronauts into low-Earth orbit after NASA cancelled its Space Shuttle Program.

“This accomplished group of American astronauts, flying on new spacecraft developed by our commercial partners Boeing and SpaceX, will launch a new era of human spaceflight,” said NASA Administrator Jim Bridenstine, during an August 3, 2018, press conference introducing the nine team members who will be part of the first commerical space flights with crew members aboard.

In September 2014, according Bloomberg News, NASA awarded Boeing and SpaceX a combined US$6.8 billion to revive the U.S.’ ability to fly to the International Space Station (ISS). As SpaceX CEO Elon Musk and Boeing CEO Dennis Muilenburg publically challenged each other over who would be the first to send astronauts to Mars, a launch schedule released by NASA on August 2, 2018, suggests SpaceX will be first to send astronauts into low-Earth orbit.

SpaceX is set to fly Demo-2, its first crewed test flight, in April 2019, according to the newly released NASA schedule, and Boeing is slatted for its first crew test flight at some point in mid-2019. This suggests SpaceX will be the first company to carry astronauts to the ISS, but both companies still need to pass test flights and certainly a myriad of other certifications before any first crewed flights to the ISS.

On the Boeing CST-100 Starliner, Ferguson will be joined by NASA astronauts Eric Boe and Nicole Mann. Ferguson, a native of Philadelphia, is a retired Navy captain, who piloted space shuttle Atlantis for STS-115, and commanded shuttle Endeavour on STS-126 and Atlantis for the final flight of the Space Shuttle Program, STS-135. He retired from NASA in 2011 and since that time has been an integral part of Boeing’s CST-100 Starliner program. He spent more than 40 days in space for NASA during his three shuttle missions.

“The engineer in me always thought if I’m not flying a spaceship, I ought to be part of the team building one,” Ferguson said. “My fingerprints are all over the Starliner and I’m thrilled to get the chance to go back to space on a vehicle that I helped design from the ground up. Riding along with me are all of the members of the Boeing team who have put their hearts and souls into this spacecraft.”

Boe came to NASA from the U.S. Air Force, where he was a fighter pilot and test pilot and rose to the rank of colonel. He was selected as an astronaut in 2000 and piloted space shuttle Endeavour for the STS-126 mission and Discovery on its final flight, STS-133.

Mann is a lieutenant colonel in the Marine Corps. She is an F/A-18 test pilot with more than 2,500 flight hours in more than 25 aircraft. Mann was selected as an astronaut in 2013. This will be her first trip to space.

“The men and women we assign to these first flights are at the forefront of this exciting new time for human spaceflight,” said Mark Geyer, director of NASA’s Johnson Space Center in Houston. “It will be thrilling to see our astronauts lift off from American soil, and we can’t wait to see them aboard the International Space Station.”

After each company successfully completes its crewed test flight, NASA will begin the final process of certifying that spacecraft and systems for regular crew missions to the space station. The agency has contracted six missions, with as many as four astronauts per mission, for each company.