April 03, 2008, Madrid, Spain - Boeing announced today that it has, for the first time in aviation history, flown a manned airplane powered by hydrogen fuel cells. 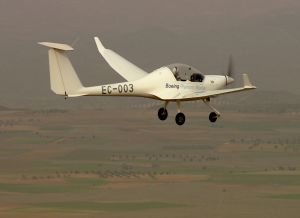 April 03, 2008, Madrid, Spain
– Boeing announced today that it has, for the first time in
aviation history, flown a manned airplane powered by hydrogen fuel
cells.

The recent milestone is the work of an
engineering team at Boeing Research & Technology Europe (BR&TE)
in Madrid, with assistance from industry partners in Austria, France,
Germany, Spain, the United Kingdom and the United States.


Boeing
is actively working to develop new technologies for environmentally
progressive aerospace products," said Francisco Escarti, BR&TE's
managing director. "We are proud of our pioneering work during the past
five years on the Fuel Cell Demonstrator Airplane project. It is a
tangible example of how we are exploring future leaps in environmental
performance, as well as a credit to the talents and innovative spirit
of our team."

A fuel cell is an electrochemical
device that converts hydrogen directly into electricity and heat with
none of the products of combustion such as carbon dioxide. Other than
heat, water is its only exhaust.

A two-seat Dimona
motor-glider with a 16.3 meter (53.5 foot) wingspan was used as the
airframe. Built by Diamond Aircraft Industries of Austria, it was
modified by BR&TE to include a Proton Exchange Membrane (PEM) fuel
cell/lithium-ion battery hybrid system to power an electric motor
coupled to a conventional propeller.

Three test
flights took place in February and March at the airfield in Ocaña,
south of Madrid, operated by the Spanish company SENASA.
During
the flights, the pilot of the experimental airplane climbed to an
altitude of 1,000 meters (3,300 feet) above sea level using a
combination of battery power and power generated by hydrogen fuel
cells. Then, after reaching the cruise altitude and disconnecting the
batteries, the pilot flew straight and level at a cruising speed of 100
kilometers per hour (62 miles per hour) for approximately 20 minutes on
power solely generated by the fuel cells.

Boeing does not envision that fuel cells will ever provide primary
power for large passenger airplanes, but the company will continue to
investigate their potential, as well as other sustainable alternative
fuel and energy sources that improve environmental performance.
BR&TE,
part of the Boeing Phantom Works advanced R&D unit, has worked
closely with Boeing Commercial Airplanes and a network of partners
since 2003 to design, assemble and fly the experimental craft.