Boeing Co. is delaying initial deliveries of the 787 Dreamliner by six months 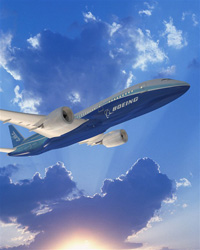 Boeing Co. is delaying initial deliveries of the 787 Dreamliner by six months due to continued challenges in completing assembly of the first airplanes. Boeing said deliveries that had been scheduled to begin next May will be pushed back to late November or December 2008.

The first flight, already pushed back once from the initial target of earlier this fall, now is anticipated around the end of the first quarter of 2008. The delay highlights inherent problems in building new airplanes and could slow the momentum Boeing built up after years of lagging behind European rival Airbus in commercial airplane manufacturing.

The 787, Boeing's first all-new jet since airlines started flying the 777 in 1995, will be the world's first large commercial airplane made mostly of carbon-fibre composites, which are lighter, more durable and less prone to corrosion than aluminum. But the company's effort has been shadowed by difficulty getting the right parts from its suppliers on time, among other issues, and it is facing a global shortage of fasteners that hold large sections of the plane together.

Boeing said the postponement will not materially affect its earnings or guidance for next year.