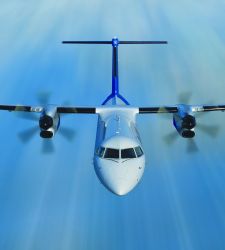 Reduction of Learjet and Challenger production rates in response to current market demand; as a result, manpower level is reduced by 1,360 or 4.5 per cent of total labour force of 30,000 workers

Bombardier Aerospace announced today that it delivered 353(i) aircraft for the fiscal year ending January 31, 2009. This compares to 361 aircraft deliveries in the previous fiscal year 2007/08 (year ending January 31, 2008). It also received 378(i) aircraft orders, net of cancellations, compared to an exceptional 698 orders, net of cancellations, for the previous fiscal year. Its book-to-bill ratio for the year stands at 1.07. Overall, Bombardier Aerospace delivered a solid performance in view of the continued worsening of the economy and its impact on the aviation industry.

Tables at the end of this press release provide delivery totals and net order totals for business, commercial and amphibious aircraft for the previous fiscal year 2008/09.

"The industry is experiencing strong turbulence and we anticipate more volatility in the short term. The fundamentals of Bombardier Aerospace are solid, but we expect we will face more challenges this year," said Guy C. Hachey, President and Chief Operating Officer, Bombardier Aerospace. "While the Corporation has taken significant steps to strengthen its operational and financial position over the last years, we must continue to be prudent and take decisive action. We will thus ensure our continued success over the long term and maintain our leadership position by meeting our customer commitments and by continuing to invest in our current and future products," he added.

In fiscal year 2008/09, Bombardier delivered 239(i) business jets compared to 232 for the same period last year. It received an intake of 262(i) orders, net of cancellations, compared to an exceptional 452 orders, net of cancellations, for the same period last year. The company has felt the impact of the worldwide economic slowdown through a greater than usual level of deferrals and cancellations for its business aircraft and, as a result, is reducing its Learjet and Challenger production rates. The book-to-bill ratio for fiscal year 2008/09 stands at 1.1.

For commercial aircraft, in fiscal year 2008/09, Bombardier delivered 110(i) commercial aircraft compared to 128 during the same period last year. The order intake for fiscal year 2008/09 totalled 114(i) aircraft, net of cancellations, compared to 238, net of cancellations, for the previous year, representing a book-to-bill ratio of slightly above one.

As a result of the rising demand for Bombardier's largest turboprop, the production rate for the 78-seat Q400 aircraft is increased, while the production rate for the CRJ Series regional jets remains unchanged. Recent orders for Bombardier's Q400 NextGen turboprop aircraft from Ethiopian Airlines and Colgan Air demonstrate Bombardier has the right products for operators looking to take advantage of its aircraft's competitive operating economics.

Therefore, the decision to adjust the Learjet and Challenger business aircraft production rates is expected to result in a total workforce reduction of approximately 1,010 temporary workers/subcontractors and 350 permanent employees, or about 4.5 per cent out of a total workforce of approximately 30,000 workers worldwide. The severance costs associated with the manpower reduction of permanent employees are expected to be less than $5 million.

The workforce reductions will take place at Bombardier Aerospace's facilities in Montreal, Wichita and Belfast over a five-month period, starting in February 2009. The layoff of permanent employees includes unionized, salaried and management personnel.

A table at the end of this press release provides additional information on the workforce reductions and the number of permanent new open positions.

"These are very challenging times. The decision to reduce our workforce was difficult to make and we fully recognize the impact it will have on our affected workers," stated Mr. Hachey.

Bombardier Aerospace's overall employment numbers will remain essentially at a similar level as recruitment for new permanent open positions, mostly for the new aircraft programs, will partly offset the reduction of 1,360 jobs. In fact, recruitment for more than 600 permanent new open positions for Bombardier's newly launched aircraft, the CSeries and Learjet 85 aircraft continues, and Bombardier is in the process of recruiting about 230 interior completion specialists for its Global aircraft completion centre in Montreal. The total number of permanent open positions is approximately 830 at Bombardier's Montreal and Belfast sites.

Impact on manpower level by sites