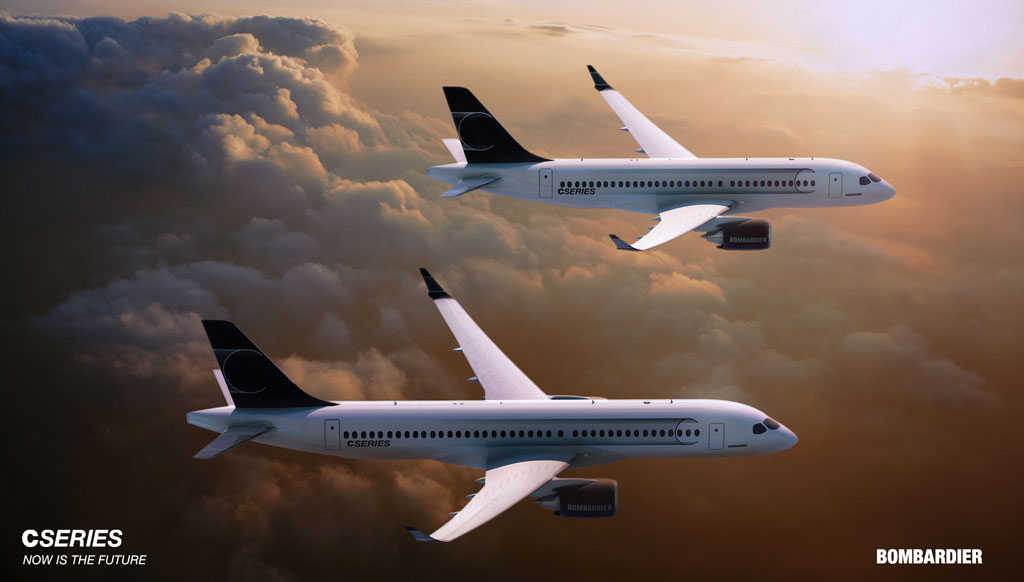 March 24, 2009, Toronto – Bombardier Aerospace has added three key European suppliers to the CSeries aircraft program. Alenia Aeronautica of Italy, Fokker Elmo of the Netherlands and Goodrich Actuation Systems of the United Kingdom, will provide key components and systems, and will be instrumental in contributing to the development and success of the all new, game-changing CSeries aircraft.

Goodrich Actuation Systems will be responsible for the design and production of the flap and slat actuation systems for the CSeries aircraft. A critical system for take-off and landing, the flap system is installed on the wing and increases both lift and drag, while the slat system adds lift and helps maintain smoother airflow.

“We are currently reviewing quotations and proposals from a wide range of potential suppliers, including other European suppliers. Bombardier’s Belfast operation in the UK is developing and producing the advanced composite wings for the CSeries aircraft, and we are confident that European suppliers will play an important role on the program, as is the case on other Bombardier programs,” he added.

On March 11, 2009, Bombardier and European airline Deutsche Lufthansa AG announced the signing of a firm purchase agreement for 30 CSeries model CS100 aircraft with options on an additional 30 CSeries aircraft. The 110-seat and 130-seat CSeries family of aircraft – including the CS100 and CS300 aircraft models – brings unmatched passenger comfort, performance, and operating economics, benefiting from the latest technological advancements, including: fourth-generation aerodynamics; increased use of composites and advanced aluminium alloys in structures; the very latest in system technologies, such as fly-by-wire, electric brakes, and a next-generation engine – the Pratt & Whitney PurePower™ PW1000G engine.

At time of entry into service in 2013, the CSeries family of aircraft will be the greenest single-aisle aircraft in its class. These game-changing aircraft will emit 20(i) per cent less CO2 and 50(i) per cent less NOx, fly four(i) times quieter, and deliver dramatic energy savings – 20(i) per cent fuel-burn advantage as well as 15(i) per cent improved cash operating costs versus current in-production aircraft of similar size. The CSeries aircraft will set a new benchmark in the industry, consuming as little as two litres of fuel per passenger per 100 kilometres in its more dense seating layouts(i).

C&D Zodiac for the design and production of the aircraft’s interior package, which includes the seats, interiors (including the linings, monuments, bins, galleys and lavatories), oxygen system, lighting system, insulation system, waste system and the water system;

Rockwell Collins as the supplier for the aircraft’s avionics system. Tailored specifically for the CSeries aircraft, its fully integrated flight deck capability will provide flexibility, high reliability and low life cycle costs without compromise on the aircraft’s performance;

Parker Hannifin Corporation, through its Aerospace Group, for the design and production of the CSeries airliner’s fully integrated fuel and hydraulics systems;

Liebherr-Aerospace Toulouse SAS for the design and production of the aircraft’s Air Management System, which includes the environmental control and cabin pressure control system;

About Alenia Aeronautica
Alenia Aeronautica, a Finmeccanica Company, is the largest Italian aeronautic player which operates world-wide in the commercial and military aviation, unmanned aerial vehicles and aerostructures. Alenia Aeronautica also coordinates the activities of Alenia Aermacchi and Alenia Aeronavali – wholly owned companies – respectively active in the design and manufacturing of military trainer aircraft and in the overhaul, maintenance and modification of military and civil aircraft.

About Fokker Elmo
Fokker Elmo is a Stork Aerospace operating company and internationally recognized as a prime specialist in electrical interconnection systems for aircraft and aircraft engines. The company holds a number two market position. Fokker Elmo owns facilities in The Netherlands, China, USA and Turkey.

Stork Aerospace develops and produces advanced structures and electrical systems for the aerospace industry, and supplies integrated maintenance services and products to aircraft owners and operators.

About Goodrich Actuation Systems
Goodrich Corporation, a Fortune 500 company, is a global supplier of systems and services to aerospace, defense and homeland security markets. With one of the most strategically diversified portfolios of products in the industry, Goodrich serves a global customer base with significant worldwide manufacturing and service facilities. For more information visit http://www.goodrich.com .