In a major step toward a program launch this year, Bombardier Inc.has authorized formal sales deals for its new CSeries aircraft. 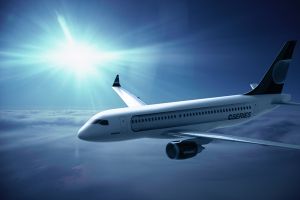 Feb 22, 2008, Montreal – In a major step toward a program launch this year, Bombardier Inc.has authorized formal sales deals for its new CSeries aircraft. Company president Pierre Beaudoin said: “Airlines worldwide have expressed their keen interest to receive formal sales proposals.
The announcement was immediately welcomed by world airlines. The CSeries, with five seats abreast, is designed for the lower end of the 100- to 149-seat market segment. That's estimated at 5,900 aircraft – worth US$250 billion over the next 20 years – and Bombardier aims to capture half of that market.

Montreal-based Bombardier said a program launch decision is expected this year, with service entry scheduled for 2013. Beaudoin said the CSeries aircraft “will benefit from the latest technological advancements, including: increased use of composites and aluminum lithium in structures; a next-generation engine – the Pratt & Whitney Geared TurbofanTM; and the very latest in system technologies, such as fly-by-wire, and fourth-generation aerodynamics. He said the advancements will produce up to 20 per cent better fuel burn and up to 15 per cent improved cash operating costs.

Friday's announcement was immediately hailed by Pratt & Whitney and possible customers.
At Germany's Lufthansa, “we are considering the CSeries family of aircraft in our broader evaluation of opportunities for the lower end of the single-aisle fleet because its proposed advantages could be attractive to us," said Nico Buchholz, senior vice-president for the corporate fleet. At Qatar Airways, “the CSeries aircraft's 2013 entry into service date suits us very well. We envisage an order for 20 aircraft," said CEO Akbar Al Baker.