Bombardier Business Aircraft opened its doors to the media on Nov.3, as the company showcased the first two Global 7000 flight test vehicles (FTVs) at the Company's state-of-the-art assembly line in Toronto. 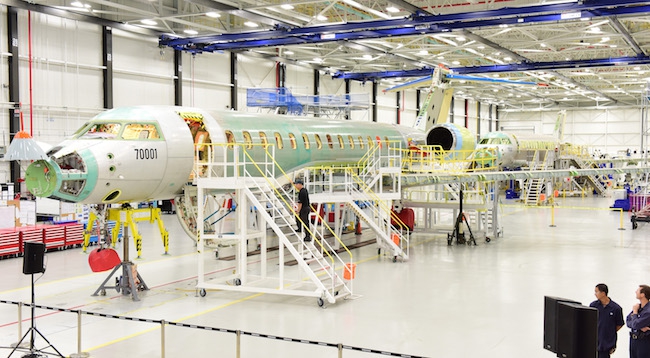 “The Global 7000 aircraft flight test vehicles are being assembled on the most advanced production line in business aviation,” said David Coleal, President, Bombardier Business Aircraft. “With a no-compromise approach and forward-thinking technology, we are focused on bringing the game-changing Global 7000 aircraft to market.”

Bombardier is employing the highest caliber technology throughout the entire manufacturing process for the Global 7000 and Global 8000 aircraft program. The final assembly line in Toronto features a state-of-the-art automated positioning system that moves the wing structure into place for joining with the fuselage. This system uses laser-guided measuring to ensure components of the aircraft are joined consistently and perfectly each time.

Laser-guided technology is also a key feature of the final assembly line’s articulated robot drilling. Designed to ensure consistent quality and repeatability, the robot drilling features a tolerance for accuracy and precision within less than one thousandth of an inch. Combining human ingenuity with the most advanced machines, the Global 7000 and Global 8000 final assembly line is a testament to the commitment Bombardier has made to deliver the most advanced aircraft to the market.

“We’re excited by the unprecedented precision and quality we’ve observed on the assembly of the first two flight test vehicles,” said Michel Ouellette, Senior Vice President, Global 7000 and Global 8000 Program. “This further validates that Bombardier made the right choice in the technology it is employing to build the most advanced business jet on the market.”

The Global 7000 and Global 8000 aircraft program is progressing as planned. Flight test vehicles one and two were on display during the event on the high-tech final assembly line in Toronto, and two additional flight test vehicles are in various stages of production and assembly. The program’s integrated aircraft ground tests are also making good progress across 15 facilities.