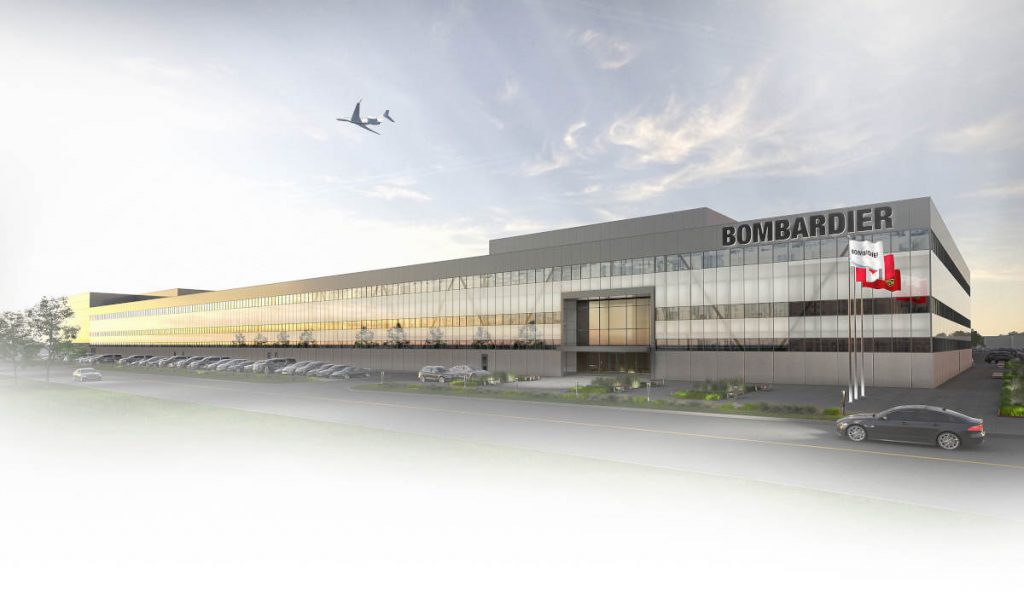 A rendering of the planned Bombardier Global Manufacturing Centre at Toronto International Pearson. The 1 million square-foot facility, focusing on final assembly of the Global business jet family, is expected to be operational by 2023. (Image: Bombardier)

Bombardier today announced it has reached a long-term lease agreement with the Greater Toronto Airports Authority to build a new Global Manufacturing Centre at Toronto Pearson International Airport. Production activities for the facility, which includes final assembly operations for all of Bombardier’s Global business jets, including its flagship Global 7500, are set to begin in 2023.

“This is a strategic move for Bombardier and a strong commitment to Ontario’s aerospace industry,” said Alain Bellemare, president and CEO of Bombardier Inc. “It will allow us to offer world-class career opportunities and continue fueling the economic development of the region for years to come.”

The new facility at Toronto Pearson in Mississauga will be located approximately 20 km from the Bombardier’s current Global aircraft final assembly site at Downsview. Bombardier in June 2018 completed the sale of its Downsview property to the Public Sector Pension Investment Board for approximately US$635 million. That deal included conditions for Bombardier to operate from Downsview for a period of up to three years, with two optional one-year extension periods.

Bombardier explains its new Toronto facility will encompass 1 million square feet, set on 41.2 acres, and employ thousands of highly-skilled workers. In addition holding enough capacity to build up to 100 aircraft per year, the new operation will also include a hangar space for preflight activities.

The Montreal-based company plans to invest in innovative tooling and production for the facility, as well as continued collaboration with Ontario’s colleges and universities for training, research and development. Bombardier also points to existing manufacturing advances deployed for its Global 7500 jets, including an automated positioning system that uses laser-guided measuring to ensure major aircraft structures, such as the wing and fuselage.

“Aerospace is one of the most innovative and global industries in Canada. This new facility will showcase Canada’s aerospace industry, support our highly skilled workforce and will be a hub for the world-class aircraft produced in the Greater Toronto Area,” said Navdeep Bains, Minister of Innovation, Science and Industry. “It will also demonstrate Bombardier’s leadership in business jets for years to come.”

During the announcement of its new Toronto Pearson facility, Bombardier also noted it will continue to support the aerospace heritage of the Downsview site with a multi-million-dollar contribution to the Downsview Aerospace Innovation and Research Consortium (DAIR). This contribution includes $2.5 million in capital funding to refurbish the historic Moth Building, where wartime Mosquito fighter bombers and Tiger Moth trainers were produced.

“Bombardier could have chosen many other places in the world to locate their new Global Manufacturing Centre, but they have chosen Mississauga and for that, we are thankful,” said Bonnie Crombie, mayor of Mississauga. “We look forward to working with Bombardier as they grow their business in Mississauga. Our City welcomes this investment as it will bring new, high quality jobs, boost economic growth, and help raise Mississauga’s profile as a global aerospace hub, home to Canada’s largest aerospace cluster, where innovation thrives.”