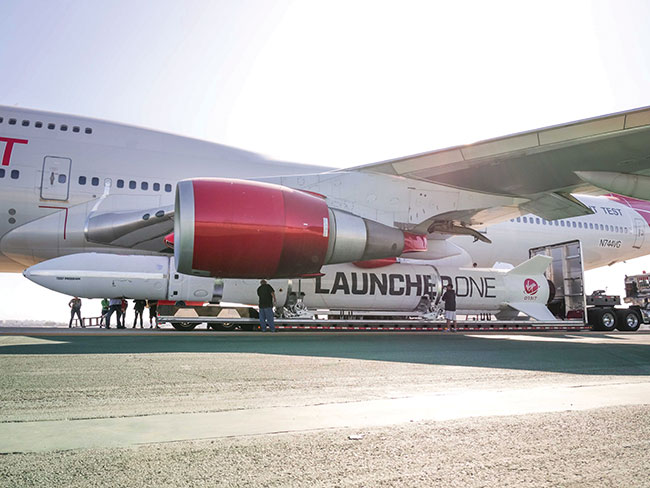 The company’s modified 747 jet dubbed Cosmic Girl jet took off from California’s Mojave Desert, carrying the 70-foot (21-meter) rocket beneath its left wing. Once the plane was over the Pacific near the Channel Islands, the LauncherOne rocket peeled away, then fired its engine to head to space. The drop occurred at an altitude of about 37,000 feet (11,000 meters).

Camera views showed the package of seven small satellites on the end of the second stage, against the curve of the blue Earth. The satellites are from the U.S. Defense Department, the Royal Netherlands Air Force and Poland’s SatRevolution company, which is working to set up an Earth-observing constellation.

Virgin Orbit later declared success, saying the satellites were in the proper orbit.

Branson, whose Virgin Galactic company is close to launching paying customers to the edge of space, planted a kiss on the cheek of Virgin Orbit CEO Dan Hart, once the satellites reached orbit.

In an interview later with The Associated Press, Branson declined to say whether he will be on Virgin Galactic’s next test flight to space – or the one after that as originally planned. The company plans three more test flights of its rocket ship this summer and fall before taking paying passengers next year.

“All I can say is when the engineers tell me that I can go to space, I’m ready, fit and healthy to go,” Branson told the AP. “So we’ll see.”

Virgin Orbit sent its first batch of satellites into orbit in January; the 10 NASA-sponsored satellites were designed and built by universities. A flight demo last year was unsuccessful.

Virgin Orbit said its air-launched system can put satellites into orbit on relatively short notice, compared with the more traditional way of launching rockets from the ground. Branson hopes to make satellite launches “almost routine” from the Mojave Air and Space Port.

The company’s next launch is planned for this fall, according to Hart.

Branson named Wednesday’s mission Tubular Bells after the music made famous in the 1973 horror film “The Exorcist.” It was the first album put out by Virgin Records.