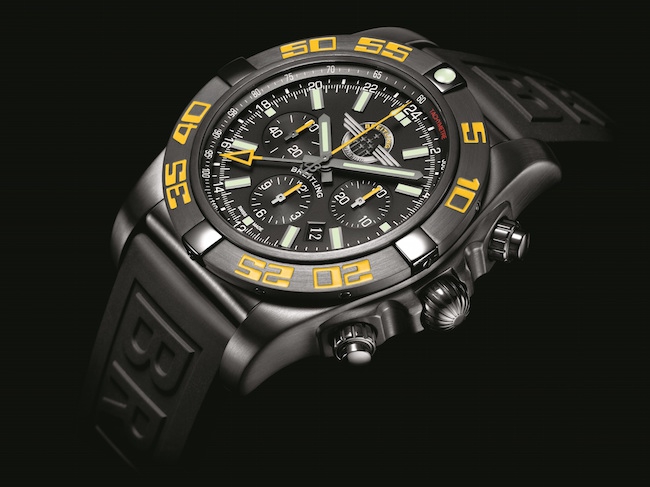 In a limited edition of 250 pieces, the unique traveler’s timepiece has a sleek black-steel case, onyx black dial, and distinct yellow accents, which mirrors the colors of the Breitling Jet Team’s fleet of L-39 C Albatros Jets. The eye-catching piece befits the world-famous Jet Team, who have toured North America and are known for their precision flying and breathtaking performances. This prestigious aerobatic display team is the largest of its kind; comprised of seven L-39 C Albatros jets that can reach speeds of up to 565 mph and 8G acceleration.

“The Breitling Jet Team has such a successful North American Tour this year and the first Jet Team timepiece was so popular, that we decided to do another version in the Chronomat GMT style as well,” said Breitling USA President Thierry Prissert. “As the Jet Team concludes the final leg of their American Tour with performances all around the U.S. and Canada in September and October, we wanted to introduce this unique timepiece so that crowds all around North American can enjoy.”

“The Breitling Jet Team has had an amazing North American Tour,” said Breitling Jet Team Leader Jacques Bothelin. “We are thrilled that we are coming back in 2016. This year we had some incredible flights: the Statue of Liberty, Mount Rushmore, and Niagara Falls. It is very exciting to see what next year will hold.”

The Breitling Jet Team American tour, which spanned airshows throughout the U.S. and Canada in 2015, will conclude their tour at the Miramar Air Show and Wings Over Houston this year. The Breitling Jet Team’s full schedule is available at: http://www.breitling-jet-team.com. The 2016 North American Tour will be announced later this year.