Challenger 605 cruises into the future. 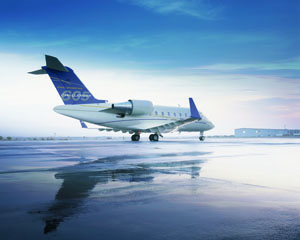 Jean-Christophe Lamy flew with Yves Tessier, one of Bombardier’s demonstration pilots, on the Challenger 605. What follows is his report on this revolutionary new aircraft.

Many versions of the Challenger 600 have been created over its 30 years. This constant evolution was fueled not only by the necessary integration of new technologies but also by Bombardier’s desire to respond to the needs expressed by its clients – a wise choice since almost 800 Challenger 600 series aircraft in service on all continents prove its intrinsic qualities on a daily basis. Backed by this rich heritage, the Challenger 605 continues the tradition.
In 1976 Bill Lear designed the LearStar 600, one of the first business airplanes equipped with winglets. Soon acquired by Canadair, this concept – renamed Challenger CL-600 – went through numerous modifications. For example, the size of the fuselage was greatly increased so that passengers could stand up in the cabin, another first at that time. The inaugural flight took off from Montreal on November 8, 1978 and certification was obtained in the fall of 1980. The aircraft was an immediate success since in three years Canadair sold 86 of them around the globe. With the launch, the continuous evolution of the Challenger had already started and would never stop.

In 1983, the first CL-601-1A was delivered. It featured a new engine, increased fuel capacity and winglets. Four years later, after Bombardier purchased Canadair, the CL-601-3A became one of the first aircraft in its category to have a cockpit equipped with display screens grouping most of the flight instruments. The fundamental characteristics of the plane would ensure not only its success in the business airplane market, but also lead to the creation of the CRJ, brought to market in 1992; more than 1,200 have been sold to date. Numerous technical synergies were to evolve from this situation, unique in the aeronautic industry’s annals.

In 1996, with almost 350 CL-601s in service, Bombardier unveiled the first Challenger 604. This new version clearly benefited from the great deal of experience acquired through the CRJ,  since the landing gear, engines and avionics were completely reconfigured; 366 planes were sold over a 10-year period.
Now, statesmen and company presidents, armies and all sorts of elite cross the globe on Challengers. Instead of being satisfied with its success, the advent of new technologies and the desire to keep up with the growing needs of a demanding client base motivated the Montreal-based manufacturer to once again revise its leading product, resulting in the introduction of the Challenger 605 in January 2007. 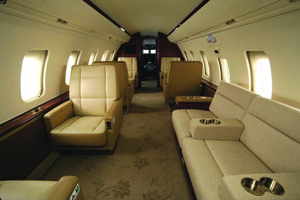 For the first time in 25 years, some of the improvements made to the Challenger 605 are visible from the outside. The one I will be flying is shining in the sun on the tarmac of the Hartford, Conn. international airport. The most obvious change is the increased size and the location of the windows. They are over six centimetres higher on the fuselage and are five centimetres taller than before. This modification has quite an impact, as the quantity of natural light coming into the cabin has increased by 30 per cent. Attentive observers will also notice the new tailcone. 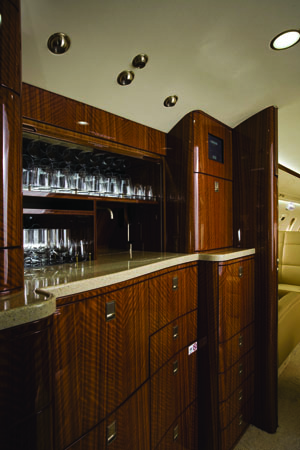 It is now a conical-shape tail instead of the previous boat-tail shape. However, the change is cosmetic and does not affect the aerodynamic characteristics of the aircraft.

Once I am aboard, the work done by the engineers is obvious; to the left, a totally re-equipped cockpit and to the right, a remodelled cabin with a new galley. I am told that Challenger 605 passengers now benefit from unparalleled comfort as well as the latest technological advances, particularly in telecommunications and data transfer. For example, an onboard computer server allows passengers to connect their computers to a wireless network (option) so that they can, among other things, go on the Internet or share and print their documents. The hours spent onboard are therefore totally productive and the plane becomes an extension of the office. The cabin can also be transformed into a luxurious living room or even into a bedroom. The different configurations (lighting, window shades, air conditioning, audio-visual system, etc.) can be controlled through a touch screen installed at the VIP seat, or the main screen installed in the galley. For more operational flexibility, all of these controls are also accessible from the cockpit.

This is where Yves Tessier, one of Bombardier’s demonstration pilots, is waiting for me. He invites me to sit in the left seat, which provides ample room. Even the crew has a right to its share of comforts! At first glance, the installation of the Rockwell Collins Pro-Line 21 avionics suite is a success. Before me are four well-proportioned (25.4 cm wide and 30.5 cm high) liquid crystal screens. I immediately feel comfortable with the ergonomics. The controls are easily accessible, essential information is right in front of me and highlighted on the screens. These can, however, be configured in great part to the pilots’ preferences. The configuration can be saved for the next flight. The active and display functions are accessible through pull-down menus and through a control panel located on the central pedestal. For its part, the ceiling is the same as in the Challenger 604. In my opinion, this is where the manufacturer’s efforts should be concentrated in the future. Indeed, since the principal systems of the 605 are identical to those of the 604, operational procedures reflect the relatively low level of automation of this plane. For example, in the absence of FADEC, engine management, although quite easy, requires a certain number of manual operations and precautions that are no longer required on more recent aircraft. The pilots therefore have more to do. However, this characteristic becomes an advantage in the context of a fleet made up of Challengers of different generations since they all possess the same type of certification.

Seen from the cockpit, the most striking characteristic of the Challenger 605 is that it’s an electronic airplane. The airport and approach maps, the pull-down navigation maps and even the checklists are shown on the multifunction display. Before approaching the runway, Yves tells me about the extreme redundancy of the flight instruments. For example, we could take off with only three out of four functional screens, or without an autothrottle. The plane is in perfect shape, but it does not come with a certain number of options that I would have liked to test, such as the Head-Up Display and the Bombardier Enhanced Vision System. (This is in certification and will soon be available on the Challenger 605.)

It moves quite easily, but to ensure passenger comfort we have to guard against applying the brakes too suddenly before the carbon disks have attained the optimal temperature. The weather is perfect, a slight wind blowing in the runway centre line, the sky is totally clear and the external temperature is approaching the freezing mark. The FMS determined the power required for takeoff of this 17-ton aircraft and estimated the length of runway needed. Once the plane is aligned, I activate the automatic control by pressing only one button and we’re off. We leave the ground after less then 1,100 metres and ascend without interruption to 17,000 feet at a rate of 5,000 fpm. After rising above the many levels imposed by air traffic control, we settle at 23,000 feet. In the very first minutes spent on the controls, I can tell that the Challenger 605 has a good performance and is easy to pilot. Without wasting time, Yves suggests that I perform a few manoeuvres to get even more comfortable with the plane. We then accelerate to the maximum speed allowed at the current altitude. The level of noise in the cockpit is very reasonable. After these manoeuvres, we start descending quickly, engines slowing down and airbrakes being deployed to the maximum.

The airframe vibrations are minimal. I also notice that the pressurization system works effortlessly and easily adapts itself to these sudden changes in altitude. Once the aircraft has stabilized at 13,000 feet, Yves lets me try the different approach configurations. Deploying the flaps and landing gear brings about small changes of attitude, which can be perfectly managed with depth compensator. The plane is very stable when flying slowly, perfectly at ease on all axes.

It’s now time to prepare for our return to the airport. Yves puts the approach map on his multifunction display. The symbol indicating our actual position is superimposed. The FMS is programmed and the navigation radios automatically search the frequencies required for the approach chosen. As soon as the APP mode is activated, the radios automatically switch to the correct frequencies, with no need for further action by the pilot. The weight during landing is slightly over 15 tons and the FMS calculates a Vref of 123 kts, a relatively slow speed which will allow the aircraft to stop in 800 metres without strain.
The Challenger 605 can be proud of its roots. The changes which the 604 went through to give birth to the 605 have in no way altered its tested qualities, appreciated by many prestigious clients and their pilots. A solid guarantee (for example, 10 years of coverage for the airframe), a worldwide network of technical assistance, and a training program developed and delivered by Bombardier complete the package. There have already been many dozens of orders for the Challenger 605, sold for $29.8 million US for delivery in 2010. There is no doubt that many other orders will follow.