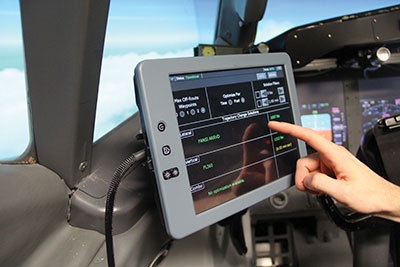 The touch screen of the Electronic Flight Bag allows pilots to easily use NASA’s Traffic Aware Strategic Aircrew Requests software. Time is money as the old adage goes and nowhere is it so important than in the aviation sector where a few minutes or seconds shaved off a flight can translate into thousands of dollars in fuel savings.

Time is money as the old adage goes and nowhere is it so important than in the aviation sector where a few minutes or seconds shaved off a flight can translate into thousands of dollars in fuel savings.

A concept called Traffic Aware Strategic Aircrew Requests (TASAR) being developed by NASA could help aircraft operators save time and fuel using technology in the cockpit to determine the most efficient flight paths while planes are in the air. The concept is being developed in conjunction with software developers from Engility Corp. of Billerica, Mass. The software is loaded onto an electronic flight bag that many airlines already use.

“We want to provide better information to pilots about potential flight path savings, but in a way that is more affordable and approvable and that supports how pilots and air traffic controllers work together today,” said NASA researcher David Wing at NASA’s Langley Research Center in Hampton, Va.

The flight testing for TASAR is being conducted Advanced Aerospace Solutions, the U.S. joint venture subsidiary of Marinvent Corp., a small research firm in St. Bruno, just outside Montreal. Marinvent has a long-standing relationship with NASA and also happened to pioneer the electronic flight bag. The software application is being flight tested on a Piaggio P. 180 Avanti aircraft owned by Marinvent.

The software is designed to connect to an aircraft’s Automatic Dependent Surveillance-Broadcast (ADS-B) receiver currently being developed that has been mandated for all U.S. aircraft by 2020, according to Wing. TASAR scans broadcast signals of nearby traffic to make sure there are no potential conflicts in any proposed flight path changes, making it easier for air traffic controllers to approve a pilot’s route change request.

Marinvent has been testing TASAR for the past three years and expects airlines interested in the technology will be doing their own high-end trials by next summer, according to Marinvent founder and president John Maris. Alaska Airlines and Virgin America are doing their own testing for NASA, said Wing.

“TASAR looks at your flight path and calculates how to optimize it for three or four things. Weather is one of them,” Maris said. “Optimum route just in terms of winds and actual path is another and special use air space, places you don’t want to fly into is a third. And over and above all those, it makes sure any solutions it offers don’t conflict with traffic.

“That’s why it’s called traffic aware. It’s not a traffic avoider, it’s not designed so that I can weave my way around New York without talking to anyone, but it won’t give me a solution that will conflict with
known traffic.”

Asked if there are similar systems already on the market, Maris said there are ground based systems that are dispatched based for the airlines and that NASA is trying to come up with an integrated solution.

“The issue is data, so if you do it on the ground, at some point you have to send all that data up to a number of aircraft. If you make the aircraft a little more autonomous . . . in terms of processing and routing, you free up all of that bandwidth,” explained Phil Cole, Marinvent’s VP of Business Development. “One of the most important factors of TASAR is that it doesn’t affect an aircraft’s certification. If you take a completely new piece of technology, a company would normally have to go to the expense of building the hardware to flight critical standards that would be safe to put in the aircraft. They drill holes, they put in cables, a lot of money to get to the point where they can put it in front of a pilot for the first time and see how it interacts with the other avionics and with other aircraft and air traffic control. We can do that (with TASAR) without the need to produce any other hardware, without drilling holes or run cable, just with software. It’s much cheaper, much quicker and we can get all that feedback to the customer before they have to commit to spend money.”

One of the advantages of TASAR is that it is going to maximize the chance of air traffic control of approving a course change, because it won’t propose something that will conflict with other traffic or route you through a thunderstorm which are the main concerns of ATC, said Maris. “And the workload in the cockpit is enormous when you have bad weather and a lot of traffic and you’re trying to optimize a route on heavy winds. TASAR maps it out and allows you to pick your own path.”

A paper prepared for the American Institute of Aeronautics and Astronautics partly written by Wing concluded that on average, aircraft equipped with TASAR, relative to aircraft not equipped with TASAR, saved about one to four minutes of time per operation depending on the length of trip and about 50 to 550 lbs of fuel per operation. Multiply that over a large fleet of aircraft and the savings add up.

“To put it in perspective, current engine manufacturers are looking at savings of a half per cent in fuel economy as being significant enough to justify the design of a new engine. So if you can save three per cent or four per cent, it’s huge,” noted Cole.

TASAR itself is meant to be a stimulant to get airlines to move over to ADS-B sooner, explained Maris. But the estimated $100,000 price to install ADS-B in each cockpit is not much of an incentive, especially when airlines don’t understand all
its benefits.

But the TASAR technology is being well received by the aviation industry, according to Wing. “We’ve talked to airlines and avionics manufacturers and we’ve had extremely positive response from all of them.”

Marinvent is also working on a project called an Airfoil Performance Monitor that monitors the airflow over an airfoil surface to optimize the way an aircraft is flown in all kinds of weather conditions and in all phases of flight.

“You get much better fuel economy from an aircraft if you’re flying it in its optimal configuration. There are some very large potential fuel savings associated with that,” Cole pointed out. “It will also tell you when you’re getting degradation in lift performance of an airfoil as a result of contamination of the airfoil. It could be bugs, bad paint work, dust, ice or snow.”

This is a very important product that Marinvent has already spent $10 million on to develop and it is waiting for the documentation evidence to show the impact this device has on fuel economy.

“It has been through extensive flight trials,” Maris said. “It’s been tested by NASA and by B.F. Goodrich. It’s been in wind tunnels and icing tunnels. It’s a very mature piece of research technology now going for its deployment certification. It’s about where TASAR is now. APM tells you your stall speed, it tells you exactly how much margin you have before you stall the airplane with ice. There is no other instrument anywhere that can do that.”

It also tells you where the ice is on the aircraft. If you have ice on the wings versus the tail, the stall recovery procedure is completely opposite, Cole pointed out. Many fatal accidents caused by icing could have been prevented with an APM.

A third product Marinvent is working on is Synthesis, a software tool to make the company more efficient which it has productized for external use.

“Think of a project management tool that’s designed specifically to address the kind of issues that come up in certification,” Cole explained. “We did it for a flight test certification perspective, but it could be used for software certification, it could be for railways or nuclear power plants and so on. Anywhere someone is building something that is complex that needs a high level of certification and validation against some externally controlled regulated standard.

“What we do is organize that project for them. So we start out with what you need to do, we work out how to do what you need to do and demonstrate that you’ve complied with all the external factors governing success. And at the end of it, we provide the documentation that the regulatory body wants to see to show that we did exactly what we said we would do and here’s why it’s safe.”

One customer estimated that Synthesis saved them a year off the certification time of an aircraft, resulting in savings of about $1 billion, Cole pointed out. “Those last two pieces of IPs (intellectual properties) are the things that will change Marinvent’s fortunes in the future.”