While a proposed Chinese import tariff on U.S.-built, large-cabin business jets is causing concern south of the border, just as the sector is emerging from an extended economic downturn, Canadian business jet sales and leasing could be impacted by proposed tax changes from the Canada Revenue Agency. 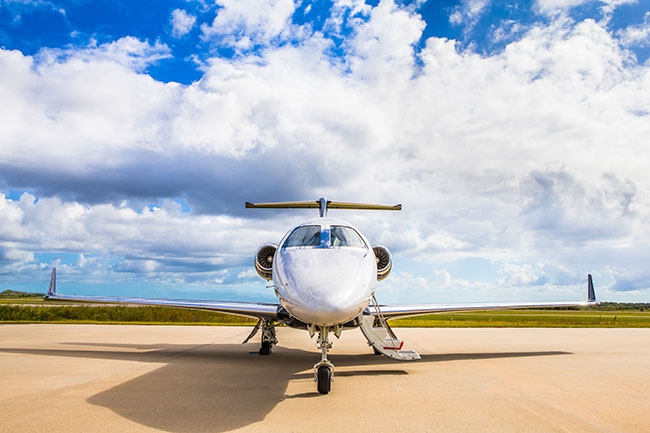 The first Embraer Phenom 300E light business jet has been delivered While a proposed Chinese import tariff on U.S.-built

When changes to the tax rules were still up in the air, it stalled a few owners, according to Bill McGoey, president of Edmonton-based Aurora Jet Partners.

“It flattened us out, because cost certainty is important for owners, but it has improved now that we know what the changes are,” he said. “Basically, the new rules are worse than they were, partially because the tax burden is going up for the personal use of an aircraft.” (For more on this topic see Unraveling CRA’s new policy by lawyer and tax specialist Steven Sitcoff, page 46.)

Apart from the Canada Revenue Agency (CRA) tax changes, business is picking up at Aurora which operates 11 aircraft with three more being added at its bases in Edmonton, Toronto and Vancouver.

It had a record year in 2014, but the years 2015 to 2017 were challenging, according to McGoey. While his business is not directly related to the oil patch, it can be directly impacted by such economic changes to the market.

“Our customers include real estate developers, construction companies and car dealerships with multiple locations,” said McGoey. “If a dealer is selling fewer cars or a realtor is selling fewer properties, because the market is down, that affects us.”

But since the end of 2017, there have been more deals on the books with oil production improving and related projects close to completion, explains McGoey, whose business model has also changed from traditional fractional ownership to a more hybrid model of ownership.

“Instead of having a one-eighth share of an aircraft, there is more demand for having just two or three partners sharing an aircraft to cut fixed costs,” said McGoey. “If there are three partners each using the aircraft for 100 hours a year, it can be leased out the rest of the time.

“Under the one-eighth model, there are fewer hours available to lease out an aircraft and a few owners tend to leave after the traditional five-year lease agreement and then you have to find replacements.”

Line-ups to buy new aircraft are not as long as in past years, explains McGoey, and manufacturers are producing fewer aircraft, forcing them to discount.

“The pre-owned market is starting to lighten up, but it’s still a challenging time,” he says. “MROs are doing well due to changes in the regulations for 2020. It can cost over $1 million on avionics in older aircraft to be compliant.”

McGoey was referring to Future Air Navigation Systems (FANS 1/A technology), which must be installed in business jets before a January 1, 2020, deadline or owners and operators risk the grounding of aircraft and potential incurrence of hefty fines.

After December 31, 2019, business aircraft need to be equipped wit ADS-B or Automatic Dependent Surveillance Contracts to provide real-time position updates and improve communication between pilots and controllers through a common language.

These contracts can be initiated through a periodic method, based on an event or through pilot mayday, and are established directly by the controller through the aircraft systems. The ADS-B requirement has been on commercial aircraft since the 1990s.

Skyservice, Canada’s largest business aviation company, is not sure how it will be impacted by the CRA’s new tax proposals, but customers are asking a lot of questions, according to Lyn Shinn, vice-president, central region, HondaJet sales and pre-owned aircraft sales.

“When a new customer comes in, we recommend they meet with a tax lawyer or aviation tax lawyer to make sure they’re compliant with the new interpretation of the regulations.

“I’m not sure how it will affect our business, but there’s a lot of discussion around it and now we’re answering a lot of customers’ questions, which is costing us a lot of labour and manpower.”

The business itself is very strong compared to last year, explains Shinn, with a lot more listings. The values of aircraft, which were declining, are now stable and the number of aircraft being purchased is also up with prices stabilizing.

Shinn has also noticed a significant change in her operations. In the past, customers usually entered the business by buying or leasing a small aircraft, before trading up to a medium-sized aircraft and then on to a larger one. Now, many of them are starting out at the top.

“A lot of it has to do with pricing and a stronger economy,” she says. “But the reality is the airline industry is not serving its customers well. Right now, we are suffering from low inventory.”

A new trend is being spurred on by the 2020 ADS-B compliance. “Everyone wants their aircraft to have the avionics requirements installed to avoid long down-time, And of course, everyone wants Wi-Fi. Connectivity is very important.”

Skyservice is the only Canadian member of the Texas-based National Aircraft Resale Association, according to Shinn who noted that only one or two of its 70 aircraft are registered in the U.S. Under domestic laws, a Canadian cannot keep a U.S. registered aircraft in Canada for an extended period of time, she noted.

The positive trend outlined by both Shinn and McGoey is supported by a recent presentation to NBAA by JETNET iQ, an independent research group focused on business aviation. According to the report, 657 new business jets will be delivered globally this year, up slightly from 2017. About 60 per cent of the units will be sold in North America.

The order backlog at the Big 5 OEMs (Bombardier, Dassault Falcon, Embraer, Gulfstream and Textron) declined nine per cent last year from 2016, while global sales in the pre-owned jet market rose from 2,491 units in 2016 to 2,668 units last year. During the same period, for sale inventory declined from 2,315 to 2,143 units.

According to JETNET iQ, economic indicators are mostly positive for the industry, with owner and operator sentiments the highest since 2010. Last year also marked the low point in its 10-year jet delivery forecast.