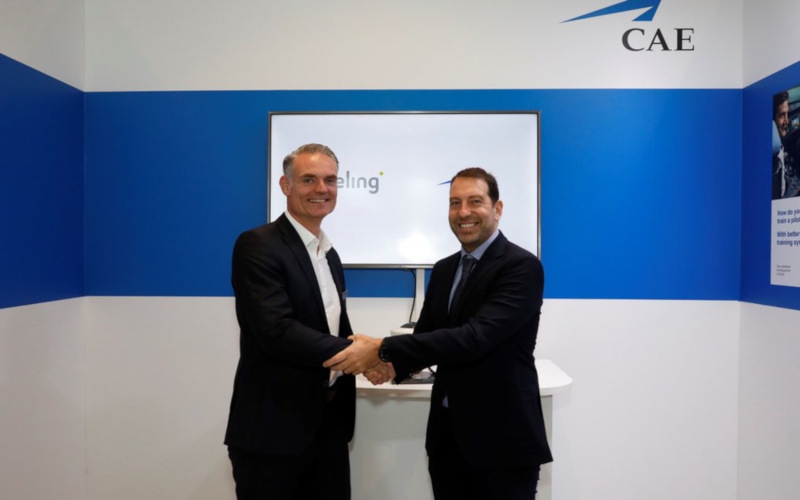 easyJet deal
The agreement with easyJet is the largest new contract of the four, valued at more than $170 million over the next 10 years. Under the agreement, all of easyJet’s pilots will train at CAE, which will expand its training network to provide the airline with three new European pilot training locations, equipped with a fleet of CAE’s latest XR Series flight simulators. CAE will provide easyJet with state-of-the-art pilot training solutions at training centres located in London-Gatwick and Manchester in the UK, as well as Milan, Italy.

During easyJet’s fiscal year 2018, ending September 30, 2018, the airline has recruited 460 pilots, which is a pilot recruitment record for the airline as it continues to expand across Europe. In the last year alone easyJet has added bases to its network in Berlin Tegel and Bordeaux and now flies more than 1,000 routes on over 300 Airbus A320 family aircraft. In July 2018 easyJet took delivery of the first of 30 A321neo aircraft.

As part of the contract, CAE will build a new training centre in London-Gatwick with a dedicated space to serve easyJet’s training needs. It will deploy nine Airbus A320-family full-flight simulators (FFSs) and three flight training devices (FTDs) in the new London-Gatwick centre. The agreement also includes two additional training locations in Manchester, UK, and Milan, Italy. The centres will be ready for training starting in the second half of 2019.

“This represents one of the biggest deals of its kind in Europe in the last five years and we are pleased to be working with CAE as a trusted and highly innovative training provider to help ensure easyJet is a centre of excellence for crew training,” said Chris Browne, easyJet’s chief operating officer.

CAE has been delivering pilot training solutions to easyJet pilots since 2004. In 2010, easyJet selected CAE as its launch partner for a cadet Pilot Programme based on the Multi-Crew Pilot Licence (MPL). To date, CAE has selected, assessed, trained and delivered more than 900 co-pilots and captains through the easyJet MPL Integrated ATPL and type-rating training programs for the airline.

“This agreement helps us invest in the future growth of LOT and helps us attract new pilots on the global competitive aviation market,” said Maciej Wilk, chief operations officer of LOT. The airline’s first new pilots have already started their training with CAE.

CAE and LOT Polish Airlines share a long-standing relationship of more than 10 years, with the provision of pilot training. “It’s an honour to support the growing pilot training needs of LOT Polish Airlines across CAE’s training network in Europe, near our airline partner’s base in Warsaw,” said Nick Leontidis, CAE’s group president, Civil Aviation Training Solutions.

Under terms of the agreement, CAE will deliver Bombardier CRJ900 pilot training to the airline for a period of eight years following the start of training expected by May 2020. As a result, CAE will deploy a new CAE 7000XR series CRJ900/1000 full-flight simulator (FFS) at CAE Amsterdam by 2020, and will update its current CRJ200/900 FFS to the latest CRJ900 configuration at CAE Copenhagen by the end of 2019.

Additionally, to support CityJet’s growth plans and meet its training needs, CAE will train the airline’s future pilots starting with 12 cadets next year, building on its previous agreement. As part of their 18-month training program, cadets will complete their ground school and flight training at CAE Oxford and CAE Phoenix. Upon successful completion of their training, graduates will be employed by CityJet.

“CAE has been a tremendous partner for CityJet over the past few years, developing our future pilots, and providing an outstanding training experience to our pilots and cabin crew,” said Capt. Robert Campbell Smith, General Manager Flight Operations at CityJet. “With this announcement, the increased capacity and the upgraded simulator at CAE Copenhagen will ensure our training needs will be met in the coming years.”

CAE explains it has been CityJet’s training partner of choice since 2016, providing cadet to captain and cabin crew training, as well as crew resourcing services.

Vueling Airlines deal
CAE also reached a deal to launch a cadet pilot training program in partnership with Vueling Airlines based in Barcelona, Spain. CAE will select, assess and train up to 80 new pilots over the next four years for the European airline.

Starting in the fall of 2018, the selected candidates will begin an 18-month training program at CAE Madrid. The first group of Vueling’s cadets will begin EASA theoretical knowledge training at CAE’s training centre in Madrid, followed by flight training at CAE Phoenix and CAE Oxford before returning to CAE Barcelona to complete their Airbus A320 type-rating training.

“We are excited to partner with CAE and we are confident that our training partner of choice will deliver professional pilots who will be ready to fly confidently,” said Alberto Guerrero, pilots training director at Vueling.

CAE has been providing pilot and cabin crew training to Vueling for almost 15 years. More than 1,000 pilots and cabin crew members have been trained for the Spanish carrier, which is part of the International Airlines Group.