In July 2013, Calgary artist Michael Markowsky became the first person to make artwork while travelling faster than the speed of sound. As part of the “War Artist” Program, he created 100 postcard-sized landscape drawings while flying in a Royal Canadian Air Force CF-18 ‘Hornet’ jet plane around CFB Cold Lake. 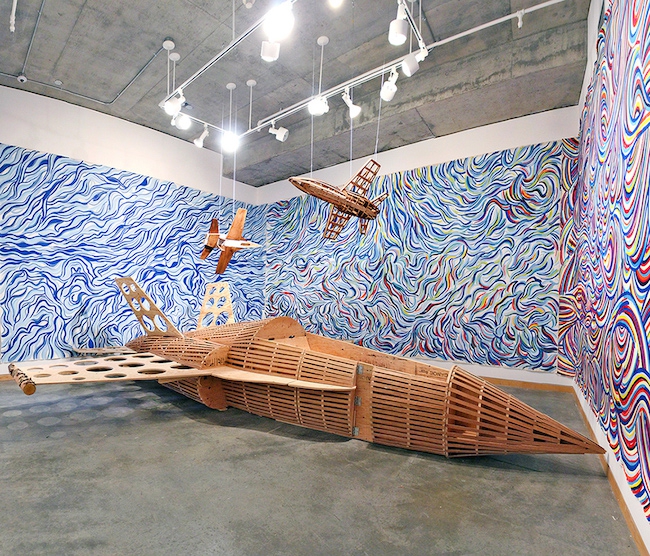 In late September, The Calgary International Film Festival will unveil a 30-minute documentary film that follows Markowsky’s journey to create art under the most challenging of circumstances. The film captures the rigorous tests and training that the artist went through leading up to his once-in-a-lifetime, 1½ hour-long flight.

When asked if he was scared about flying upside down and being subjected to extreme G-forces, Markowsky says he was mostly concerned about not disappointing the RCAF pilots: “I was afraid that I would make a fool of myself and make a bunch of bad, scribbly drawings. But when the pilots saw them they were excited because I had captured their experience on paper.”

The film, entitled Markowsky Draws in a Fighter Plane, is directed by acclaimed Calgary filmmaker Michael Peterson who says that unlike most artists, “Michael’s artistic process lends itself very well to cinema. The stakes are high and the element of danger is real. When we see Michael learning how to parachute and operate an ejection seat, it becomes clear that this is not your typical movie about an artist!”

Another short film by Michael Peterson entitled The Whale premiered at the prestigious Cannes Film Festival in May. Peterson is most well-known for his feature-length comedy hit Lloyd the Conqueror that featured comedy veterans Brian Posehn (Seinfeld), Harland Williams (There’s Something About Mary) and Mike “Bubbles” Smith (Trailer Park Boys).

Artist Michael Markowsky and Director Michael Peterson will both appear at the film screening, which begins at 5:30pm on Sunday, September 27th at the Junction Theatre Grand (608 1st Street SW, Calgary).