Even with the collapse of Jetsgo, 2005 has been the calmest for Canadian airlines in years. David Carr looks at whether it can last, and where future growth will come from. 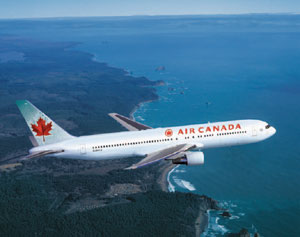 As WestJet prepares to go head-to-head with Air Canada and Harmony
Airways on the Vancouver- Hawaii route in December, there is
speculation over when the Calgary-based lowcost airline will go even
further afield and launch scheduled service to the UK.

CEO
Clive Beddoe is not ruling it out, and why would he? Even with the
demise of Jetsgo at the peak of this year’s spring break, there are
fewer Canadian destinations where WestJet can plant the flag.
Especially with its current mix of large Boeing 737 aircraft, although
the arrival of the 119-passenger 737-600 this summer has afforded the
airline greater flexibility on thinner routes.

For 2005, the
Canadian airline industry’s buzzwords are expansion and renewal, with
five of Canada’s largest airlines either adding new airplanes or making
plans to do so. WestJet, for example, will retire the last of its
gasguzzling B737-200s next March, and is expected to take delivery of
16 new 737s in 2006. CanJet recently announced it will soon be in the
market for new airplanes, which may include either the Embraer 190,
also ordered by Air Canada, or the yet-to-belaunched Bombardier
CSeries. Either type would suit operations from CanJet’s Atlantic
Canada base, if the financing is right.

The mood is a welcome
reversal from earlier years when the survival of Canada’s largest
airline, Air Canada, was sometimes in doubt. This summer, Air Canada
deployed the first of its 73- passenger Embraer 175 aircraft on routes
to Philadelphia, Boston and Chicago.

Air Canada is the first
airline to operate the 175, which will be joined by its larger
Brazilian cousin, the 93-passenger Embraer 190 in November. Both
aircraft are expected to rewrite Air Canada’s approach to transborder
service, with the airline aggressively opening up more point-to-point
service across longer-range, but thinner city pairs.

Even with
renewed flexibility, Air Canada remains anxious to see the current open
skies agreement with the US replaced by a new bilateral that would
crack open transborder markets even wider, by allowing airlines on both
sides of the border to operate in each other’s backyard. In the past,
Air Canada has proposed allowing US and Canadian airlines the freedom
to transport domestic traffic of either country through their hubs.

There
is little appetite for this among regulators on either side of the
border, leaving some in Canada to peddle a softer approach known as
right of establishment. Under right of establishment, US and Canadian
airlines could enter each other’s market by setting up subsidiaries
that would hire local crews to operate domestically- registered
aircraft.

The model for right of establishment is Virgin Blue,
the Australian low-cost subsidiary of UK-based Virgin Atlantic. But
with more than 50% of the US industry in bankruptcy protection and
knocking on Congress’s door for even more bailouts, it is not clear how
many airlines would be interested in setting up a separate operation in
a small market such as Canada.

What is clear, however, is that
Canada would like to have its own deal with the US in place ahead of a
new bilateral agreement between the Americans and the European Union.
That window of opportunity may have already closed. Representatives
from the US and the EU met in Brussels in mid-October to begin
hammering out a new bilateral that some industry watchers suggest could
be in place by the end of the year. A second round of talks are
scheduled for November in Washington, about the same time that Canadian
and US negotiators sit down for the first time.

According to
federal transport minister Jean Lapierre, a new Canada | US open skies
agreement is not likely before the spring. Even than, Canadian
negotiators might still get in ahead of the Europeans. A traditional
stumbling block in US | EU negotiations has been access to London’s
Heathrow Airport. More recently, European carriers see the ease with
which bankrupt US airlines can enter Chapter 11 as a form of
protectionism.

Regardless of who crosses the finish line first,
the US | EU deal is being viewed as a template for the long overdue
consolidation of the global airline industry. To that end, the
Transport Minister would be well advised to launch a parallel set of
negotiations with the EU, rather than taking a wait and see approach to
how Europe’s negotiations with the Americans play out.

And what
of the transport minister? Following an early setback at the hands of
his own finance minister on a plan to reduce airport rents, Lapierre
appears to have discovered his sea legs. He has won industry praise for
moving quickly to reach new bilateral agreements with India and China,
two future growth areas that the government once risked leaving behind
in a bureaucratic backwater.

The minister also appears
determined not to show up empty-handed at the Air Transport Association
of Canada’s annual meeting this November in Montreal, after raising
expectations last year in Vancouver. Lapierre has announced that Ottawa
will finally boost foreign ownership of Canadian airlines from 25% to
the 49% already allowed in Europe.

All three major airlines –
Air Canada, WestJet and Air Transat – have each flown close to the wind
this year in exceeding foreign ownership rules, and have had to
throttle back their exposure. WestJet introduced a two-tier capital
structure to ensure that the number of voting shares held by
non-Canadian residents remained under 25%.

The immediate benefit
of increased foreign ownership would be to give existing airlines
access to greater sources of capital, especially among large US
investment houses. The longer-term impact could be far greater, and
lead to a rationalization of the North American airline industry, with
transborder mergers similar to the one between Air France and KLM.

Proponents
of increased foreign ownership have argued that fears over a major
US-based airline gobbling up chunks of the Canadian industry are
largely misplaced, given that 50% of the US airline industry is stuck
in bankruptcy protection. Such assurances might be premature. With
Delta and Northwest (America’s thirdand fourth-largest airlines)
joining United in Chapter 11, at least one permanent bankruptcy seems
inevitable, bringing overdue stability to the US market.

Besides,
where is it written that it will be a US airline that is the aggressor?
Air Canada has already moved to secure a beachhead in the US. The
airline that once owned 25% of Continental has just carved out a 7%
equity stake in the new US Airways, America’s fifth-largest airline
after its merger with America West and exit from bankruptcy protection.
(Air Canada expects up to US$1.5 billion in third-party maintenance
work to flow north into its technical services division as a result of
this US$75-million investment.)

Larger than the concern over
Americans buying into the Canadian airline industry should be the
prospect of another Jetsgo arriving to destabilize it. At the very
least, relaxed foreign ownership restrictions could spark a new price
war by giving an entrepreneur like Michel Leblanc greater access to the
capital needed to start a new airline and buying market share by
papering the country with deep-discount fares.

Liberalized air
agreements and increases in foreign ownership have signalled a positive
shift in government thinking since Lapierre arrived at Transport
Canada. Still, none of the initiatives he has announced to date will
cost cash-rich Ottawa money, which makes Lapierre’s failure to address
the airport rent issue more problematic.

With a shipping
magnatecum- drunken sailor as prime minister, delegates to the November
ATAC meeting should not expect any new government air transport policy
that will actually take money from the treasury, other than the token
adjustment announced earlier this year that will maintain ground rents
at most airports at current levels, but slow the rate of increase.

That
is not going to be good enough, especially for the Greater Toronto
Airports Authority, which has joined with tenant airlines to lobby
Ottawa for more relief from its crushing $145-million annual rent bill.

For
now, airport fees have been overtaken by the price of fuel on the cost
radar. Air Canada’s fuel bill has increased 84% since January 2004. It
and WestJet have introduced a strategic blend of hedging and fuel
surcharges that have enabled both to pass increases on to their
customers without hurting load factors. But for how long? As Giovanni
Bisignani, director general of the International Air Transport
Association, said recently: “Oil is robbing the industry of a return to
profitability.”

The cost of a barrel of oil will ease, although
few are predicting that it will tumble below the US$50 mark anytime
soon. And while strategies to absorb the oil shock might differ from
airline to airline, the fundamental cost of filling the tanks with more
expensive fuel affects all equally. Not so with other competitive
pressures.

Labour unrest similar to what grounded British
Airways for a few days this summer, disrupted Northwest and almost
knocked Air Canada’s Boeing 767 fleet replacement off course, continues
to plague the socalled legacy carriers. Recent full-page advertisements
in the Globe and Mail by disgruntled former Canadian Airlines pilots
suggest that Air Canada’s labour difficulties are not completely behind
it, especially on the flight deck.

As the industry rebounds,
WestJet also has some competitive challenges ahead if it wants to keep
snatching market share away from its rival, especially in matching Air
Canada’s Aeroplan loyalty program (6 million+ members) and plugging
into an international route network. As growth opportunities at home
stagnate, international routes are the North American airline
industry’s sweet spot.

Should WestJet opt to go global, expect
it to do so with the same prudence that has marked its entry into the
US. A first step might be to join the oneworld alliance, the largest
rival to Air Canada’s Star Alliance with United Airlines, Lufthansa and
others; but oneworld has been minus ‘one’ in Canada since Canadian
Airlines, a founding partner, was taken over by Air Canada. WestJet has
two oneworld heavyweights as it's new Terminnal 3 neighbours in
Toronto: American Airlines and BA.


Related
Canada Jetlines gets TC approval to soon take to the skies
Challenging the skies
Bluer skies to come: Canada explores the potential
ATAC 2003: In a Holding Pattern