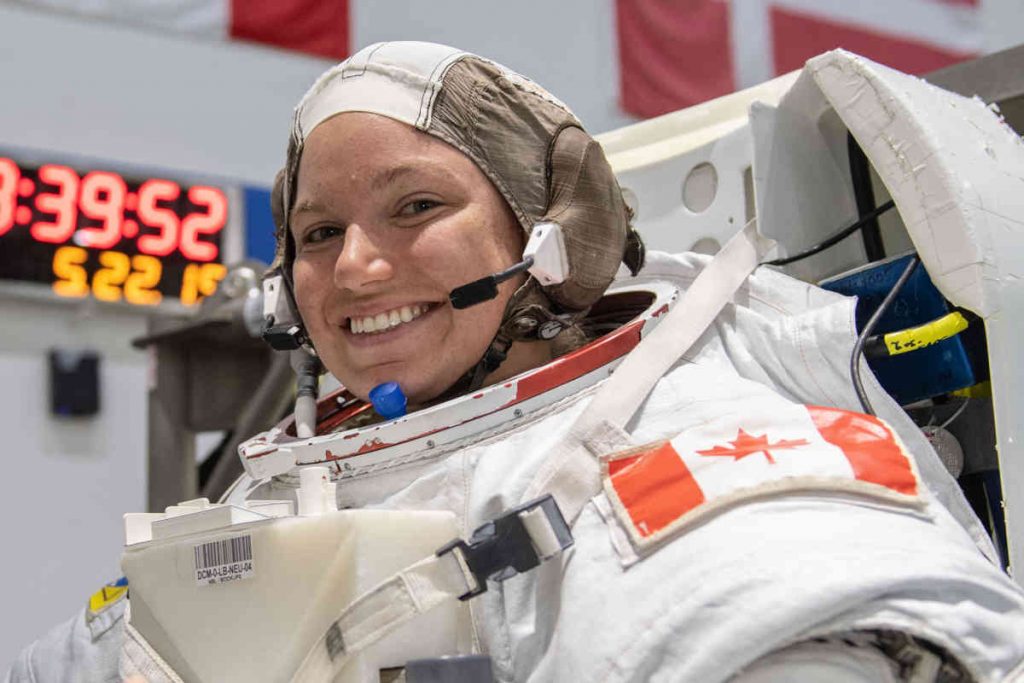 Jenni Sidey-Gibbons in May 2019 prepares for training at the Neutral Buoyancy Laboratory (NBL) at the Sonny Carter Training Facility, near the Johnson Space Center. (Photo: NASA)

Canadian Space Agency astronauts Jenni Sidey-Gibbons and Joshua Kutryk on January 10 completed the end of their basic training, which lasted for more than two years after their initial selection in July 2017 – Canada’s fourth such recruitment process that happens approximately every seven years. After their selection, the two Canadians moved to Houston, Texas, to start the Astronaut Candidate Training Program at the Johnson Space Center, joining 11 American classmates.

Named as WINGS’ Top 20 Under 40 honourees in 2018, Sidey-Gibbons and Kutryk, explains the Canadian Space Agency (CSA), are now ready to represent Canada on missions to the International Space Station (ISS), the Moon, or potentially Mars. This is the first class to graduate under NASA’s Artemis program, which aims to once again have astronauts set foot on the moon through the Lunar Gateway project. Canada last year announced its partnership with this NASA project. As well, Canada’s new Space Strategy guarantees flight opportunities in low Earth orbit for CSA astronauts.

This graduating class is particularly significant for NASA as it prepares to once again launch astronauts from American soil for the first time since 2011, when the agency shut down its Space Shuttle program, thereafter relying on Russia’s Soyuz program to get people into space and to the ISS.

The 13 graduates, selected in 2017 from what NASA describes as a record-setting pool of more than 18,000 applicants, completed training in spacewalking, robotics, ISS systems, T-38 jet proficiency, and Russian language. Their class was the first to be supervised by a Canadian astronaut, Jeremy Hansen. Sidey-Gibbons and Kutryk are CSA’s 13th and 14th astronauts, joining Hansen and David Saint-Jacques as Canada’s four astronauts on active service.

“Canada’s astronauts are our modern-day explorers. Not only do they help develop new space technologies, advance scientific knowledge and promote Canada in space, they inspire all Canadians to look to the stars and dream about what is possible,” said Navdeep Bains, Canada’s Minister of Innovation, Science and Industry. “Jenni and Joshua represent the best of Canada, both with our partners around the world, and our curious young people.”

Kutryk has more than 2,800 hours of flying experience on more than 25 aircraft types. Prior to joining the Canadian space program, Kutryk worked as an experimental test pilot and a fighter pilot in Cold Lake, AB, where he led the unit responsible for the operational flight-testing of CF-18 fighter aircraft in Canada – in addition to serving as an instructor for new CF-18 pilots. Here, Kutryk also worked on technical flight test projects, ranging from out-of-control flying to automated navigation and flight control systems to weapon guidance and control.

In 2012, Kutryk received the prestigious Liethen-Tittle Award from the United States Air Force for being its top test pilot graduate, an award also presented to Colonel Chris Hadfield in 1988. From 2007 to 2011, LCol Kutryk served as a CF-18 fighter pilot with 425 Tactical Fighter Squadron in Bagotville, QC. During that time, he flew missions in support of NATO, UN and NORAD commitments around the world. He has been deployed in both Libya and Afghanistan.

Dr. Sidey-Gibbons, age 30, was born in Calgary and holds an honours bachelor’s degree in mechanical engineering from McGill University in Montreal, QC (2011), where she conducted research on flame propagation in microgravity in collaboration with the CSA and the National Research Council Flight Research Laboratory. She then moved to the UK to earn a Ph.D. in engineering with a focus on combustion from the University of Cambridge (2015).

Her research in Cambridge focused on the development of low-emission combustors for gas turbine engines. She also also worked as an assistant professor in the Energy, Fluid Mechanics and Turbomachinery division on topics ranging from conventional and alternative energy production to introductory thermodynamics and flame physics.

Sidey-Gibbons was the co-founder of the Cambridge chapter of Robogals, a student-run international organization that aims to empower young women in STEM. Through this work, she has taught programming to more than 3,000 young girls across the UK, which in large part led to her receiving the Institution of Engineering and Technology’s Young Woman Engineer of the Year Award and a RAEng Young Engineer of the Year Award in 2016.