On May 8, 2008, the Canadian Airports Council (CAC) announced its support for the Minister of Industry's promise to "make transportation a North American advantage." 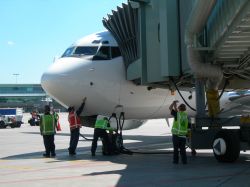 On May 8, 2008, the Canadian Airports Council (CAC) announced its support for the
Minister of Industry's promise to "make transportation a North
American advantage," To that end, the federal government can make some policy
changes for this to become a priority and a Canadian reality.

The Industry Minister's comments came in a speech in early May before The Council of the Americas in Washington.

"Minister Prentice says we need to make progress on measures to cut
costs, reduce barriers and ensure that people and goods move more smoothly
within North America. We agree; with some changes in policy and the right
fiscal framework in place to support these changes, Canada has the unilateral
ability to make some of this progress today," said CAC President and CEO Jim
Facette.


In particular, the CAC cited four broad areas of policy change needed to
further Canada's role in "the North American advantage" through aviation

The provision of resources for the border services of Canada Border Services Agency (CBSA) at airports has been insufficient to meet Canada's growing trade and tourism needs.

There are projected to be 22.1 million passengers travelling between Canada and the U.S. in 2008 – an increase of more than 30 per cent over five years ago. Yet none of the funding announced in the federal budget is expected to enhance levels of service at Canada's airports.

At the same time as it needs more resources, CBSA needs to be able to apply its resources more flexibly. More needs to be done to take advantage of technology programs such as NEXUS – which automates Canada-U.S. border crossings for pre-registered members – to ensure Canada is part of global initiatives such as the U.S. Global Entry program.

Canada and the U.S. are long-time friends and trading partners. An approach to cross-border trade based on point-of-departure would focus risk management resources on people and goods before they arrive in Canada or the U.S. This would greatly improve the flow of people and goods across the border by focusing security resources where there is the most risk

To implement such an approach requires government commitment to continue developing programs for travellers and cargo that pre-access and pre-manage risk.

A Globally Cost Competitive Approach to Aviation in Canada

Federal policy has long treated aviation as a "cash cow" in Canada, seriously impacting Canada's ability to be competitive with the U.S. and the rest of the world. Canadian airports lose more than 2 million passengers each year to U.S. airports due to higher Canadian taxes such as airport rent and the fuel excise tax.

At the same time, Canadian airports must compete with airports around the world for new passenger and cargo services to their communities and must offer cost-competitive alternatives.

Being competitive requires no only a cost competitive environment, but the ability, through more liberalized air agreements, for companies to open new air services. Canada has tremendous potential to serve as a hub for passenger and cargo traffic from the world to North America, but costs and market access are hindering this potential.

The House of Commons Standing Committee on International Trade endorsed
such an approach last May when it called on the federal government to negotiate more international air service agreements as one of its Ten
Steps to a Better Trade Policy.

"Canada's ability to prosper through the "North American advantage" is not just about highways and bridges, railways and sea ports. Aviation is an increasingly important facilitator of tourism and trade between Canada and the U.S. and also need the right framework to help us
prosper," said Mr. Facette. "Increasing the competitiveness of our
businesses and economies, making our borders smarter and more secure –
these commitments reiterated by Minister Prentice yesterday are achievable. Progress can be made today."


About the Canadian Airports Council

The Canadian Airports Council (CAC) is the voice for Canada's airports. Its 49 members represent more than 180 airports, including all of the National
Airports System (NAS) airports and most significant municipal airports in
every province and territory. Together, CAC members handle virtually all of
the nation's air cargo and international passenger traffic and 95% of domestic
passenger traffic. They create in excess of $45 billion in economic activity
in the communities they serve. And more than 200,000 jobs are directly
associated with CAC member airports, generating a payroll of more than
$8 billion annually.

There are immediate steps that the federal government could take to
improve Canada's place in "the North American advantage" through aviation:

2. Integrate NEXUS, CANPASS into Global Entry and Other International
Trusted Traveller Programs – NEXUS and CANPASS represent uses of
technology that enable us to concentrate security resources on
travellers who represent the most risk. Expansion of these programs,
including integration with international programs, will allow border
resources to be applied more intelligently.

3. Implement Transit without Visa and In-Transit Departure Facility
Programs – Canada is a logical hub for passengers travelling between
Asia and Europe and the Americas. These programs improve the
attractiveness of Canadian airports as transiting hubs.

4. Modern and Enhanced Passenger Screening – The Canadian Air
Transportation Security Authority (CATSA) needs more resources, but
more importantly the flexibility and regulatory environment that will
allow for new approaches such as trusted traveller programs to improve
screening of passengers at Canada's airports.

5. Eliminate the Re-screening of Connecting Bags – Passenger baggage from
Canada's pre-clearance airports that transit through a U.S. airport
currently is re-screened in the U.S. This is a huge waste of resources
and often delays baggage delivery to the traveller's final
destination. This was cited as a priority at the summer 2007 Canada-
U.S.-Mexico talks, but to date there has been no progress on this
issue.

6. Eliminate Airport Rent – Airport rent is a cost that airports must
pass on to air carriers and their passengers and goods. It is a
$300 million a year cost that puts Canada at a significant competitive
disadvantage to airports in the U.S. and around the world.

7. Allow Arrivals Duty Free – Canadian duty free operators currently are
restricted to selling their products when a traveller leaves Canada.
An estimated $50 million in revenue currently going to over seas duty
free stores could be repatriated if travellers could buy duty free
when they arrive in Canada.