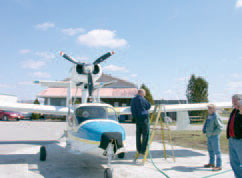 The good times are continuing for the Canadian MRO (Maintenance,
Repair, and Overhaul) industry, with MROs of all sizes reporting
overall strong sales and full hangars.

“I’ve
had one of the busiest years since I took over the business,” says Glen
Latour, president and maintenance director at Glen’s TerryAir in
Centralia, Ontario. “I don’t see any end to it in sight.”

“Although
the new year was soft – and I don’t know why it was – business has been
strong since March,” says Barry Aylward, president of Kitchener Aero in
Kitchener, Ontario. “In particular, we’re retrofitting a lot of new
avionics into a number of older aircraft.”

“Montreal’s ExelTech
Aerospace became a thirdparty MRO in 2000, when management at
InterCanadian Airlines bought out this regional carrier’s maintenance
division,” says Derek Nice, Exeltech’s president and CEO. “Since that
time, we’ve grown our business 60 per cent annually, and expanded
substantially into the global market, so yes; the good times are
continuing.”

In fact, 80-85 per cent of the work in ExelTech’s
230,000 square feet of hangar space is performed for non-Canadian
clients. “Our biggest customers are American Eagle (the American
Airlines feeder), Piedmont (US Airways feeder), and Atlantic Southwest
Airlines (Delta feeder),” says Nice. “We are also by far the largest
supplier of maintenance services to the Caribbean, plus we also serve
Europe, Hawaii, and Russia. Domestically, we do all of the heavy
maintenance on CanJet’s 737s. We also do work for Air Canada, Air
Canada Jazz, and Air Quebec.”

What’s Driving Business
Ask
MROs why business is good, and you’ll receive a wide range of answers.
“I don’t know what’s driving it; certainly not the low price of gas,”
says Glen Latour. “Perhaps it’s because a lot of AMEs are retiring, and
there’s not enough people to take their place.”

“As the commuter
turboprop fleets get older, their propellers are requiring servicing,”
says Terry Hope. “That’s certainly helping our business.”

At
ExelTech Aerospace in Montreal, Derek Nice credits his company’s
success to a combination of quality work, top customer service, and
competitive prices when compared to other MROs; especially those based
in the U.S. “We work extensively with our international customers to
reduce the cost of brining their aircraft to us. This means that we
help deal with Customs, to smooth the way for bringing in their planes
and parts.”

But There’s Always Something
Even with the continuing good times, Canada’s MROs find themselves grappling with a number of serious challenges.

Of
these, finding the right technicians – and enough of them – to service
aircraft “is a real problem,” says Kitchener Aero’s Aylward. “The
shortage has been going on for a while, due to technicians being
attracted to other fields for higher pay. Ironically, our biggest
problem has been Transport Canada. They’ve been the biggest poacher
around here, although we’ve been losing people to Air Canada and
Bombardier as well.”

Glen’s TerryAir’s Latour agrees. “It’s
really tough to find people with a good work ethic and a willingness to
do the job right,” he says. As for retaining good staff? “All we can do
to keep good people is to pay and benefit them really well, and do
whatever we can to make this a good place to work,” Aylward says.

On
the customer side of the business: “Education is a real issue,
especially when it comes to understanding the value of preventive
maintenance,” says Terry Hope. “Take propeller overhauls: They used to
occur every five years, until Transport Canada agreed to let them
extend to ten-year periods, with inspections in between. Well, those
who know about propeller corrosion will tell you that letting overhauls
go this long doesn’t really save you money, because there’s more repair
work needed every ten years than every five. Meanwhile, you’re flying
on propellers which may have significant corrosion, which cuts into
your margin of safety.”

Then there’s the healthy Canadian
dollar. For MROs with a lot of international customers, the declining
value of the US dollar – down from $1.60 Canadian in January 2002 to
about $1.09 today – has really eaten into their bottom lines. “We’re
paid in US dollars, so when their value goes down against the Canadian
dollar, we get paid less,” says Nice. To put this in context, a repair
job worth US$100,000 would have netted ExelTech $160,000 in 2002,
compared to $109,000 now.

“Unfortunately, the vast majority of
our clients expect our pricing to be in US dollars, so there’s no way
to recoup these losses by charging in Canadian,” he adds. “To offset
these losses, we work very hard to constantly improve our productivity
and our efficiency.”

At the same time, “fuel costs are a real
issue for international customers flying to our facility,” says Donald
Kamenz, Exeltech’s VP of sales and marketing. “We also find ourselves
dealing with a high degree of seasonality. Airlines like to keep their
planes flying in the summer and over Christmas, which means keeping
them out of the shop for those periods. That complicates our cash flow.”

Increased
airport security is a headache for MROs such as Arado Aero. It’s a
Spruce Grove, Alberta company that travels to client aircraft rather
than expecting clients to come to them.

“We provide structural
repairs and modification services throughout the west and north,” says
Arado Aero GM Chuck Teschke. “Unfortunately, it’s getting harder and
harder to get our tool kits through airport security in a reasonable
length of time. In the old days, airport security knew us and would
wave us through with our toolkits. Now, they stop us and go through
them in detail, even though they still know who we are.”

The
airport security bottleneck has become so bad for Arado Aero that this
MRO has taken to driving to its clients’ planes whenever possible.
“Anywhere within six hours’ drive of our facility – that’s as far away
as Medicine Hat – is handled by sending out a truck, rather than flying
in personnel,” Teschke says. “It’s just faster.”

Looking Ahead
Even
with these factors, the MROs contacted by WINGS were generally upbeat
about the industry, and their places in it. “The future looks good,”
says Glen Latour.

Still, the continuing shortage of skilled
labour plus the declining US dollar is taking its toll. It’s not enough
to kill the good times, but it is putting the brakes on them a bit.