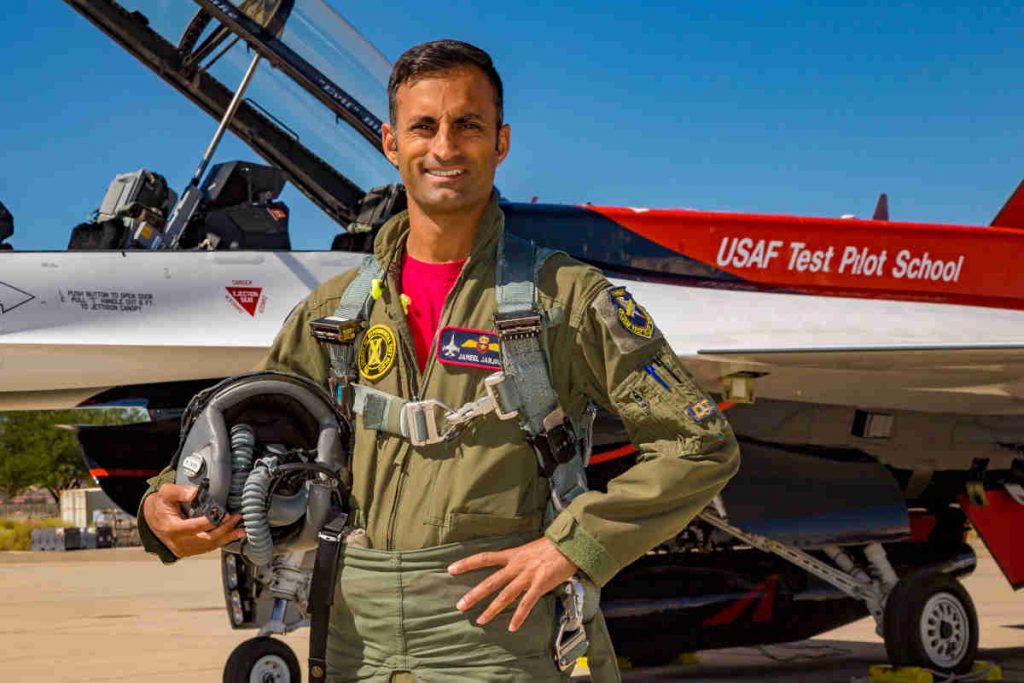 Virgin Galactic on October 27 introduced two new pilots, including Canadian Jameel Janjua, who are joining its commercial spacecraft program. Currently centred around the SpaceShipTwo VSS Unity aircraft, the program aims to provide suborbital spaceflights to tourists and a launch platform for scientific missions.

The addition of Janjua and Patrick Moran to Virgin Galactic pilot corps, brings the operation’s total number of pilots to eight, based at Spaceport America in New Mexico – leveraging the Mojave Desert for test flights.

Both Janjua and Moran will embark on an extensive training program before flying SpaceShipTwo, explains Virgin Galactic. They will also train to fly the carrier aircraft, VMS Eve, which is the company’s launch platform and also allows the pilots to fly simulated parts of the SpaceShipTwo flight trajectory, gaining hands-on training. The two new pilots will also be involved in flying other company support aircraft, working mission control, flight planning, and participating in various engineering and project roles.

Janjua and Moran have both flown for the U.S. Military in training and operational roles, as well as a number of commercial roles. Janjua has completed over 4,000 flying hours in more than 45 different vehicles throughout a career that spans over 20 years in the Royal Canadian Air Force. He also completed exchange tours for the Royal Air Force and the US Air Force and is on the Board of Directors for the Society of Experimental Test Pilots.

Moran served as a pilot in the Marine Corps for 20 years, including roles as a Test Pilot, Test Pilot school instructor, and the Lead Government Test Pilot for Navy and Marine Corps versions of the F-35 Joint Strike Fighter. He then entered business aviation as a broker, consultant, and charter pilot, and joins Virgin Galactic with over 3,000 flight hours in 34 different aircraft.

“As a flight instructor I loved to take people flying in the F/A-18 for the first time, to see their huge smiles as they climbed out of the cockpit,” said Moran. “I can’t wait to share the experience of going to space with our Future Astronauts and to see their reactions as they step out of the spaceship and describe their views of Earth from space.”

In August 2020, Virgin Galactic unveiled the first stage design for its planned build of a high-speed aircraft aimed at commercial travel. The company at tht time also reached a non-binding Memorandum of Understanding (MOU) with Rolls-Royce to collaborate in designing and developing engine propulsion technology for the high-speed commercial aircraft.

“Jameel and Pat both come with a tremendous range and depth of experience of both military and civilian aviation, and test flying in particular,” said Dave Mackay, Virgin Galactic’s Chief Pilot. “Their backgrounds, in addition to their accomplished interpersonal skills, will make them hugely valuable – particularly as we prepare for and, soon, enter commercial passenger operations.”