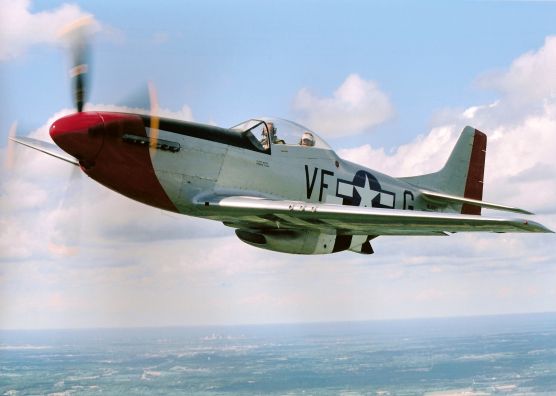 As reliable as the Canadian geese migrating, every year on the third weekend of July the aviation community heads for the little town of Geneseo, N.Y. home of the 1941 Historical Air Group.

As reliable as the Canadian geese migrating, every year on the third weekend of July the aviation community heads for the little town of Geneseo, N.Y. home of the 1941 Historical Air Group.  The Group was established in 1994 by local aviation enthusiasts, its primary goal is to continue with the traditional air show held on the turf strip at the Geneseo airport and to highlight the aircraft of the past with a focus on World War II aviation.

The 2007 show featured a large selection of aircraft, which flew for the Royal Canadian Air Force (RCAF) such as the WW1 aircraft of the Great War Museum out of Brampton Ontario.  Every year the Brampton flyers put on a great show with their Nieuport 28, SE-5As, Sopwipt Strutter, Fokker DR-1 and DR-VII. Their performance was not dampened even with a Friday evening crash of the DR VII on take off which the pilot escape with no injury.

From Tillsonburg Ontario the Canadian Harvards Aircraft Association are always in attendance at Geneseo and again the formation put on a spectacular aerial display in the beautiful blue sky.

The Vintage Wings of Canada brought in their P-51 Mustang and Supermarine Spitfire to lead the Battle of Britain segment along with the Russell Group out of Niagara Falls Ontario the Hawker Hurricane and Spitfire.  Joining them was the Canadian Warplane Heritage’s B-25 Mitchell “Grumpy” and Bill Greenwood’s rare Supermarine Spitfire Mk.IXc, dual cockpit fighter.

This was a rare sight, three Spitfires and a Hurricane at the same airshow is quite unique and as they taxied in front of us it was as if someone had turned back the clock to 1940, with the beautiful British-style landscape. Former RCAF P-40’s were also in attendance as the American Airpower Museum and Robert Baranaska flew superb formation. These two rare aircraft actually flew in Canada with the RCAF during WWII. Diverted from RAF order placed in May 1940, Robert Baranaska‘s P-40E flew with the RCAF as 1051 with No. 111 (F) Squadron, RCAF Station Patricia Bay, BC. And Jeff Clyman‘s American Airpower Museum’s P-40M flew as 845 with Western Air Command in 1943 and Fighter Affiliation Flight of No. 5 Operational Training Unit in 1944 / 1945.

The other P-51D Mustang that flew during the weekend consisted of Jim Read’s Excalibur flown by Dale Snodgrass with the USAF F-15 Heritage Flight, Chris Baranaska’s splendid “Glamorous Gal” and the CAF Dixie Wing’s red nose which flew with the RCAF. This aircraft was dropped from the USAF inventory and transferred to Canada under the Mutual Defense Assistance Program. It was officially accepted by the RCAF on 11 January 1951, and was placed in storage in Trenton, Ontario. A month later, on 26 February, this aircraft was once again flying, now with the No. 416 "Lynx" Squadron (regular) of the RCAF.  It served with this regular unit for little more than a year before being transferred to the No. 10 Technical Services Unit in Winnipeg, Manitoba, on 28 March 1952. Here it stayed until assigned to the No. 420 "Snowy Owls" squadron (auxiliary) of the RCAF in London, Ontario. Its tenure with this unit lasted until 19 July 1956, when the aircraft was listed as awaiting disposal and placed into storage. In 1957, Mr. Lloyd P. Nolen bought the aircraft with three friends for $2,500.

This signified the unofficial start of the CAF and the incredible fleet they have today.  The navy wing was represented by not one but two Corsairs, Tom Duffy’s Goodyear FG-1 flown by Terry Rush and the Collings Foundation the F4U-5 piloted by Dan McCue.  A few Canadians flew Corsairs with the Fleet Air Arm of the Royal Navy.

Trained in the US, RNFAA pilots including Canadian Lt. Hampton Gray were deployed on carriers such as HMS Formidable and Victorious and carried out daring fighter escort and attack operations in the North Atlantic. This included the famous raids against the holed-up German battleship Tirpitz. After VE Day, HMS Victorious fought in the Pacific theatre where Lt. Gray won the Victoria Cross.

Along with  the CWH Mitchell there were the American Airpower Museum rare B-25D “Miss Hap” which was the personnel VIP plane of General Hap Arnold during WWII, Tom Duffy’s B-25J “Take off Time”  and for the first time at Geneseo Mid Atlantic Air Museum’s Briefing Time.

The heavy bombers were also present as the B-17G Liberty Belle and Dave Tallichet’s Memphis Belle dropped watermelons during their bomb runs. The RCAF actually flew two B-17 Flying Fortresses during WWI performing mail runs to England and was based out of  Uplands, Ontario.

The Geneseo turf was full of Canadian aircraft. Aircraft such as the beautiful DH Fox Moth of the Vintage Wings of Canada based out of Gatineau Quebec, DH Tiger Moth , Chipmunk, C-45 and PT-26 Cornell  from the CWH , Tom Huff’s Cessna Crane, NA Yale from Jim Mattice and the Tiger Moth and Fleet 16 from the Tiger Boys from Guelph represented the days of the British Commonwealth Training Plan.

The long line of NA Harvards, SNJ and AT-6 was also very impressive as well as the usual large gathering of Stearmans. Three C-47 were also present this year along with HAG’ s C-45 and their new acquisition Beech Staggerwing and we should not forget the L-birds which were well represented also. The show also featured several acrobatic and  military acts such as a F-16 Viper and a C-130 Hercules but the main theme was antique and warbird fly-bys which made it the best little airshow on turf.
History of Flight 2007 edition was a great success and probably the best airshow since the early nineties.

Geneseo is a must for all aviation enthusiasts and photography buffs with its grass strip and beautiful background, this place is just pure magic.  So mark your calendar for the next edition of Geneseo’s “Greatest Show on Turf”, on July 11th, 12th and 13th 2008. For more details please check out their website: http://www.1941hag.org

I would like to thank Frank Shauffler for all his help and the Historical Air group’s hospitality during my visit, see you in 2008.