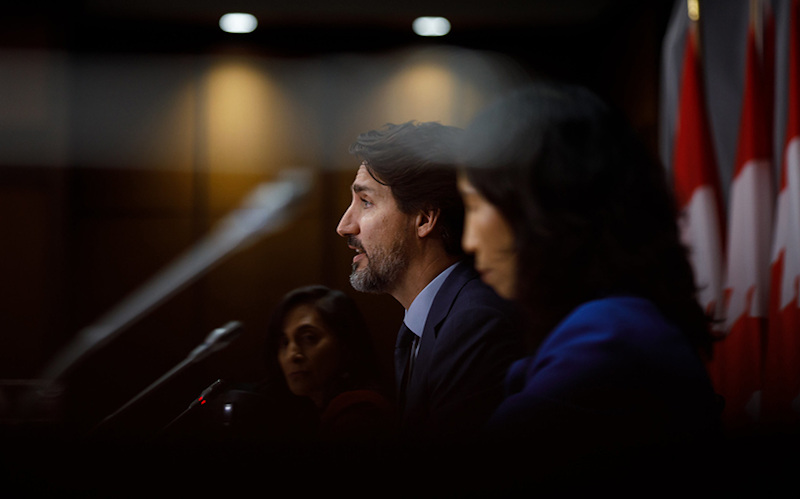 OTTAWA — Ongoing tensions between the provinces and the federal government over the management of the COVID-19 pandemic pivoted back Tuesday to the question of whether and how border controls can be tightened to slow the spread of the virus.

Prime Minister Justin Trudeau warned Canadians to cancel any non-essential trips they have planned abroad or even within Canada in the coming weeks, as new travel restrictions are on the way. What shape they might take remains up for discussion.

“The bad choices of a few will never be allowed to put everyone else in danger,” he said at a news conference outside his Rideau Cottage home in Ottawa.

The premiers for Ontario and Quebec, however, suggested new measures could be implemented swiftly, including mandatory quarantine in hotels for returning travellers, flight bans from countries where new variants of the novel coronavirus are circulating and mandatory testing upon arrival in Canada.

“We aren’t the first country to require this and we won’t be the last,” Ontario Premier Doug Ford said during a visit to Toronto’s Pearson International Airport, where a pilot project testing some incoming travellers is underway.

“I can’t figure out for the life of me why we aren’t testing every single person that comes through this airport… and the land crossings as well. We have to lock down.”

On Tuesday, the global case count topped 100 million since the novel coronavirus was first detected just over a year ago. The first cases in Canada were found a year ago this week.

The number of cases believed to be linked specifically to travel is less than two per cent, a fact officials generally peg on a ban that’s been in place for nearly a year on non-essential travel into Canada, and the associated quarantine measures.

As of Jan. 7, people coming into Canada must also take a pre-arrival COVID-19 test.

The Canada Border Services Agency said Tuesday that since that requirement went into effect, there’s been a 33 per cent drop in international travellers arriving by air when compared to a similar time period last year.

Still, dozens of flights have arrived since that date with passengers on board who later tested positive for COVID-19.

In Alberta, where a pilot project to test some returning travellers at both the land border and at the Calgary airport has been underway since November, 1.15 per cent of tests have come back positive as of last week.

Data released Tuesday on the Toronto program, which began this month, showed 2.26 per cent of tests so far came back positive.

Wesley Lesosky, who heads a union division representing about 15,000 flight attendants at nine airlines, told the House of Commons transport committee Tuesday there should be a “serious look” at using rapid tests at airports before anyone gets on a plane.

Currently, a person departing for Canada must go and get their own test, known as a PCR, within 72 hours of their departure and provide proof of a negative result.

While non-essential travel into Canada is restricted, it is much more challenging to simply block Canadians or permanent residents from travelling abroad or returning.

Quebec Premier Francois Legault likened the debate to this time last year, when pressure began for Trudeau to close the border due to the arrival of the pandemic in Canada.

The closures didn’t end up coming until mid-March – after thousands of spring break travellers from Quebec had already left, and returned, kicking off the first wave of the pandemic in that province.

He said he didn’t understand why it is taking so long for Trudeau to act this time around.

“Each day there are travellers arriving, each day that goes by there’s an added risk,” Legault said in French.

“So there’s an urgency to act.”

The National Airlines Council, which represents the largest airlines in Canada, said Tuesday despite concerns about winter travel, international air service is down 90 per cent, and domestic service has been cut by 80 per cent.

Case numbers continued to come down in much of Manitoba, but officials there also want tougher border controls, and have decided to put some in place themselves – starting Friday, all out-of-province arrivals will have to self-isolate.

Premier Brian Pallister said the move was needed given the spread of COVID-19 variants and the slowing of vaccine supplies.

No doses of the Pfizer-BioNTech vaccine will arrive in Canada this week, and there will be a reduction in deliveries next week too as the company retools a production facility in Europe.

The slowdown has seen provinces warn of running out of vaccines, and delaying second doses or even getting first ones into the arms of some priority populations, an issue they’ve blamed entirely on the federal government.

An independent effort by researchers in Saskatchewan to track vaccine delivery and administration in Canada estimates about 77 per cent of the doses received have been administered.

The federal government continued Tuesday to insist the delays won’t compromise the end goal of having all willing Canadians vaccinated by September and shortages now will be made up by a surge in deliveries in the coming weeks.