Two Canadian icons shared a birthday this July 1, our Canadian maple leaf flag and the DHC-6 Twin Otter. Canada Day celebrations in Victoria, B.C., featured a flypast of de Havilland aircraft from a 1954 Beaver to a brand new Series 400 Twin Otter. The flypast was a prelude to the Twin Otter 50th Anniversary Celebration Tour which will touch down at 13 communities across Nunavut, the Northwest Territories and the Yukon. It’s some 15,000 kilometres in 17 days, including Canadian Forces bases in Eureka and Alert. 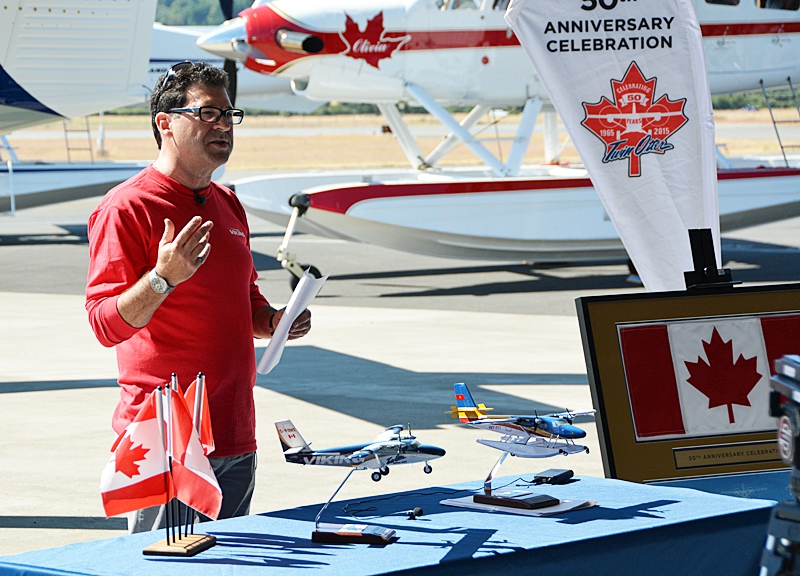 At a send-off ceremony at Victoria Airport on July 2, Viking CEO Dave Curtis spoke to a group that included local dignitaries, a former commissioner of the Northwest Territories and several retired RCAF personnel who flew the aircraft on missions around the world. Curtis characterized the trip as an opportunity to meet with customers on their turf and view operations first hand before turning the dais over to Sherry Brydson, chair of Westerkirk Capital (owner of Viking). Curtis emphasized the point that none of this would be possible without her as the “crazed entrepreneur who believes in and loves Canadian aviation and anything that has Canada on it.”

Brydson began by saying that when she tells people Viking has yet to sell a Series 400 Twin Otter in Canada they think that’s awful, but to her, it is testimony to the quality of the product. The aircraft that were built 50 years ago are still flying, and “that’s what makes this company so great. We are, first and foremost, a parts manufacturer. We are building customers for our parts business, because once you buy one of our aircraft, unfortunately we are never going to be able to sell you another one because it’s going to last 50 years and your children will be making a living flying it.”

Brydson went on to talk about the design of the Twin Otter was collaboration between De Havilland and the pilots and operators in the North to create a twin-engine aircraft that would incorporate the attributes of the Beaver and Otter with greater cargo and passenger capacity.

“What was learned more than 50 years ago and incorporated into this aircraft is what enables us to sell this aircraft today into emerging markets,” Brydson said. “Think of the geography of countries such as China, Russia, Indonesia, Malaysia and the Maldives – places with high-altitude airstrips like Nepal and Peru. The Twin Otter can do it and it can do it all. Peru is a great example of where the Twin Otter really shines, because Peru has two very different geographies. The very high mountainous areas with small gravel strips, the same as Nepal, but with Peru they also have the Amazon, so everyone who uses those aircraft has to have the confidence they can take the same aircraft and go high in the mountains or down into the jungle.”

Someone who did fly the Twin Otter high and low around the world was Al Mornan, one of the original RCAF pilots who picked up the aircraft from de Havilland and then hopscotched their way across the Atlantic, over Europe and the Middle East to support the United Nations observer mission on the India-Pakistan border. The mission entailed flying observer teams into what were often primitive gravel strips in the most remote of locations. It wasn’t unusual to find yourself at 15,000 feet ASL, skimming along a few hundred feet above the ground, surrounded by peaks that rose to more than 20,000 feet on all sides. Mornan has fond memories of the aircraft: “a wonderful airplane, just the greatest feeling.” Unfortunately it came to an end in 1971 when his aircraft was destroyed on the ground by Indian aircraft strafing the Pakistani airfield the plane was parked on. Al went on to fly many more aircraft for the RCAF in a long career and the Twin Otter has found new life around the world thanks to the vision of Curtis and the passion of Brydson.

As the presentation concluded, the travel party boarded the Twin Otter and were gone, on their way to adding a new verse to I’ve Been Everywhere.