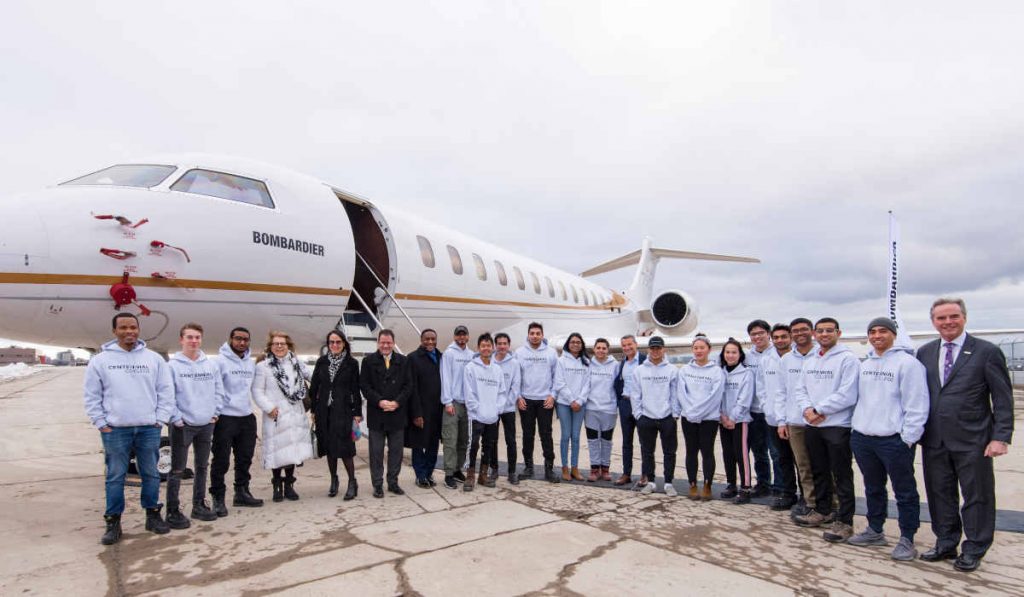 Centennial College’s aviation program in early 2020 received one of the industry’s most advanced aircraft in the Bombardier Global 7500 jet – flight test vehicle number four, known as “The Architect”.

Centennial College’s Centre for Aerospace and Aviation took hands-on aircraft maintenance and avionic maintenance training to a whole new level in early 2020, with the arrival of a Bombardier Global 7500 business jet, one of the newest and most advanced airplanes in the sky, and the only aircraft of its kind in the world to be parked at an aviation training college.

For over half a century, Centennial has prided itself in supplying the aviation community in Canada and around the world with well-trained and qualified maintenance technicians. The renamed Bombardier Centre for Aerospace and Aviation, a dedicated, state-of-the-art, 12,700-square-metre campus opened in 2019 at Toronto’s Downsview Park, and procuring a Global for training purposes, amplifies this commitment.

“Hands-on is the best way to learn a skill,” says Jamie Milks, coordinator of the Aircraft Maintenance programs. “The Global 7500 is the most advanced training aircraft anywhere in the world. It is fly-by wire, has a high-performance wing, carbon-fibre technology and the latest avionics packages. It is the technology that today’s students will be working on for decades to come.”

Like the industry it so expertly serves, Centennial’s Downsview Campus was hit hard by Covid-19. And was quick to adjust. Within weeks, 16 of 18 apprenticeship classes were completing most of their training requirements. Hangars have been divided for spacing. Labs and workshops are open, but with capacity for fewer students at a time, which make pre-class prep work vital.

Online course material is more comprehensive and training sessions are recorded, creating a permanent learning archive. In April, the school received Transport Canada acceptance that Aviation Technician training was sufficient to meet the objectives of its rigorous training standard. “We didn’t miss a beat,” Jim Passant, coordinator of the Avionics Maintenance programs, explains. “And we’ve been able to put more tools in the tool box for the future.”

Layoffs at major airlines such as Air Canada and WestJet have also helped. Centennial has been able to recruit more of aviation’s most experienced and skilled maintenance technicians as instructors. Many, nearing retirement, will stay at the school as the industry bounces back and jobs open up for well-trained graduates. A lesson in resiliency for students considering a career in aviation. Hiring has slowed during the pandemic, but demand is still there and will come back. The Bombardier Centre for Aerospace and Aviation is ready, with some of the best-connected faculty in the industry.

Centennial launched its Aviation Technician – Aircraft Maintenance program in 1967. The Avionics Maintenance program was added in the 1970s. The college was one of the first in Canada to receive Transport Canada Approved Training Organizations status to provide aircraft maintenance basic training or type training. Courses today are developed in consultation with Centennial’s advisory councils made up of leading industry professions to ensure they remain and of the highest quality.

The Aviation Technician – Aircraft Maintenance program provides students with an understanding of aircraft maintenance in areas such as general, commercial and private aviation. The program equips students for a number of career opportunities, including manufacturing (Canada is one of the world’s largest manufacturers of aircraft, engines and components), the airline industry, corporate and general aviation, flight training and the military.

The Aviation Technician – Avionics Maintenance program provides students with an understanding of complex electronic and electrical systems related to the navigation, guidance, communications, instrumentation and flight controls of modern aircraft. Graduates are equipped with skills to install, inspect and troubleshoot sophisticated equipment across a diverse range of fleets as they become more digitally advanced.

Maintenance and Avionics each offer a three-year program for students who want to add managerial and business skills to their technical learning. The industry is always on the lookout for technicians with broader managerial skills, and who understand the business beyond the shop floor. This program is an excellent fit for students with supervisory and leadership ambitions.

The school’s experienced instructors walk students through industry-standard techniques as they work on components such as airframes, engines, electrical and hydraulic systems, propellers, avionics and aircraft instruments in the best equipped labs and workshops in the country. “There isn’t anything we don’t have,” says Passant, pointing out that major Canadian airlines do not spend as much in test equipment as Centennial. “In normal operations, we are using a piece of test equipment more in a week than an airline would use in two months. Constantly updating and maintaining our test equipment is an important part of what we do.”

Equipment includes an industry leading collection of airplanes valued at over $100 million for students to work on. Centennial’s training fleet of over 10 fixed wing and rotary aircraft and hulls is one of the largest and most diverse in Canada ranging from the Robinson R22 helicopter and Piper Cherokee to a Eurocopter AS350 and Bombardier CRJ 200 regional airliner. “Students are working on what they are seeing in the sky,” Passant says. In addition to Bombardier, several suppliers donated their respective systems on the ground-breaking Global 7500, gifting Centennial a fully functioning aircraft. It illustrates the strong connections the school has with the industry, that can also serve as a job pipeline for graduates.

Whether a student picks aircraft maintenance or avionics maintenance, they are not only preparing for a career working on today’s most sophisticated aircraft and systems, they are part of the future of Canadian aviation and aerospace. The campus anchors the growing Downsview Aerospace and Research (DAIR), a cutting-edge research and innovation hub that will enhance workplace training and industry R&D. Centennial students are designing complex aircraft parts on state-of-the-art computers and simulators.

Centennial is Bombardier’s trainer of choice in the manufacturing and maintaining of its aerospace products, and the school partners in manufacturer-specific research programs such as working with Safran Landing Systems, a DAIR resident, on next-generation landing gear technologies.

“We maintain close ties with the industry,” Milks says. “There’s fibre optics research and development going on with a company dealing with instrumentation systems. They’re going to be using one of our turboprops as a testbed. It’s R&D that’s coming into our hangar, and our students will be a part of it.”

Covid-19 has disrupted every part of Canada’s aviation and aerospace sector. With a legacy that stretches over 50 years, Centennial’s aerospace and aviation programs have weathered many of the industry’s deepest downturns and have always been strategically positioned to supply airlines and manufacturers with highly qualified maintenance technicians when growth and demand for skills returns. As it will post-Covid-19. “When the aerospace and aviation sectors are looking for highly skilled employees, they are coming to us,” Milks says.

Excellent instructors, state-of-the-art labs and workshops and a fleet of training aircraft that includes one of the most sophisticated jets in the sky, only tells part of the story. When students select a college to set their career path, they should look beyond the tangibles. “We are driven,” Passant says. “Students are motivated by faculty and faculty are motivated by students. They want to be here. You see it in everybody’s eyes.”