Cessna Aircraft Company has announced that it has recently delivered the 5,000th Citation light business jet, a Citation M2,  to Helitrip Charter LLP, which is leasing the aircraft to Catreus Ltd., an established charter operator based in the U.K. This milestone demonstrates Textron Aviation’s leadership in the light jet segment.To celebrate this milestone delivery, Textron Aviation, Helitrip and Catreus held a special ceremony at the Textron Aviation headquarters in Wichita. 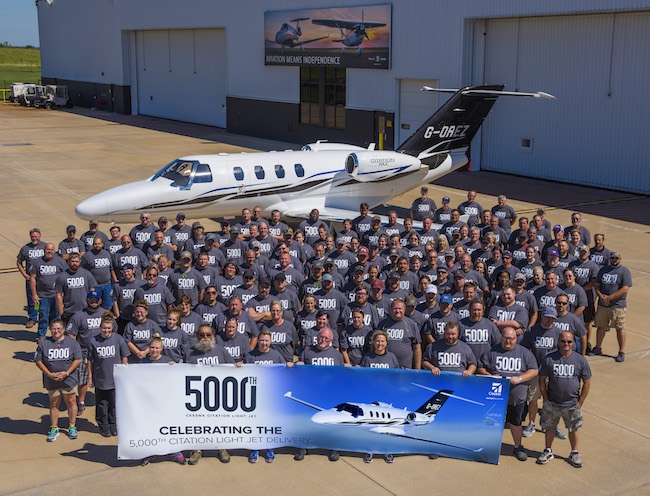 “We are thrilled Catreus will be operating another M2, as the M2’s excellent combination of range and efficiency will be a great addition to their fleet to help meet their growing customer base”, said Kriya Shortt, senior vice president, Sales and Marketing. “Cessna’s innovative spirit transformed the light jet segment, and we continue to demonstrate our leadership in this segment by bringing products to market that our customers want and need.  The 5,000th Citation light jet delivery reiterates that our company remains the indisputable leader with decades of proven performance, reliability and versatility.”

“We are delighted to add another Citation M2 to our fleet. After bringing the first M2 into the U.K. last year, we have seen an increase in demand for the aircraft. Adding a second M2 to the fleet will now allow us to meet the demand,” said Cy Williams, CEO, Catreus Ltd. “We have recently been approved as the first operator to operate the M2 out of London City, which means our entire fleet is now London City approved. We look forward to our continued relationship with Textron Aviation.”