Cessna Aircraft Co. recently delivered the first Citation Mustang to be used by a flight school to the University of North Dakota (UND). 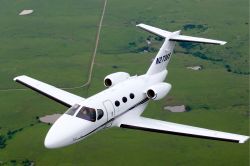 March 27, 2008, Wichita, KS  – Cessna Aircraft Co. yesterday delivered the first Citation Mustang to be used by a flight school to the University of North Dakota (UND).

The school will use this entry level Citation jet for executive travel as well as flight training for undergraduate and contract students.

This year marks the 125th anniversary of UND and the 40th anniversary of the university's John D. Odegard School of Aerospace Sciences (UND Aerospace) – an international leader in collegiate and contract aviation education that averages more than 1,000 flight students at any given time. The flight school has more than 120 aircraft available to its students. Total flight training hours at UND Aerospace exceed 100,000 annually and are estimated to approach 140,000 hours this year.

UND Aerospace celebrated the anniversary and Mustang delivery with a social event in Wichita. Alongside the Mustang, a newly refurbished Cessna 150 one of the first two aircraft in UND Aerospace's fleet was on display at the event. Both aircraft were decorated with the school's 40th anniversary logo.

"Having the Citation Mustang and Cessna 150 side-by-side shows the incredible progress that has been made in flight training in the past 40 years," said Bruce A. Smith, dean of UND Aerospace and president of the UND Aerospace Foundation. "We are excited to be able to offer training in an aircraft that incorporates all the latest technology available to pilots today. We expect the Mustang to be a great recruiting tool for the school and an amazing opportunity for students as they transition from pistons and turboprops to flying jets."

"We're pleased to see UND Aerospace as the first flight training school to have access to the new Citation Mustang," said Mick Hoveskeland, Cessna's vice president, Administration and a UND alumnus. "Whether they are moving to the airlines, charter flying or corporate flight departments, students will get a kick start to their careers by flying the large-format glass-cockpit flight displays and integrated systems."

The Mustang became the first of a new category of entry-level jets to achieve full certification from the Federal Aviation Administration (September 2006) and the European Aviation Safety Agency (May 2007). Forty-five Mustangs were delivered in 2007 from Cessna's assembly facility in Independence, Kan., where a total of 100 Mustangs are scheduled to be delivered this year. By 2009, production is expected to reach 150 Mustangs per year.