Employees at Cessna Aircraft Co. celebrated the roll out of the first production Citation XLS+ on Friday in Wichita. 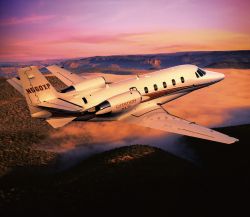 April 28, 2008, Wichita, KS – Employees at Cessna Aircraft Company, a Textron Inc.  company, celebrated the roll out of the first production Citation XLS+ on Friday at the company's primary design and manufacturing facilities in Wichita. The XLS+ is the latest version of the world's best-selling business jet model.

The first production unit now will go to paint and interiors, while two flight test aircraft continue to work toward type certification. Federal Aviation Administration certification is expected by mid year, with deliveries starting before the end of 2008.

The upgrade to the mid-size Excel/XLS will feature the fully integrated Rockwell Collins Pro Line 21 avionics suite and electronically controlled (FADEC) engines from Pratt & Whitney Canada. Exterior and interior restyling is also integrated into the new model, most prominently the extended contour of the nose and expanded seat widths, both introduced to more closely resemble Cessna's Citation X and Citation Sovereign models.

Priced at $11.595 million, the XLS+ will continue the tradition of the Excel and XLS as the most affordable stand-up cabin business jet. The family of Excel/XLS aircraft comprises nearly 650 planes with an accumulated total of more than 1.4 million flight hours.