There’s a new FBO at the Waterloo International Airport as the Chartright Air Group celebrated the opening of its new facility in grand style June 16. It was also the perfect backdrop for CBAA president/CEO Rudy Toering to share some important business aviation news. 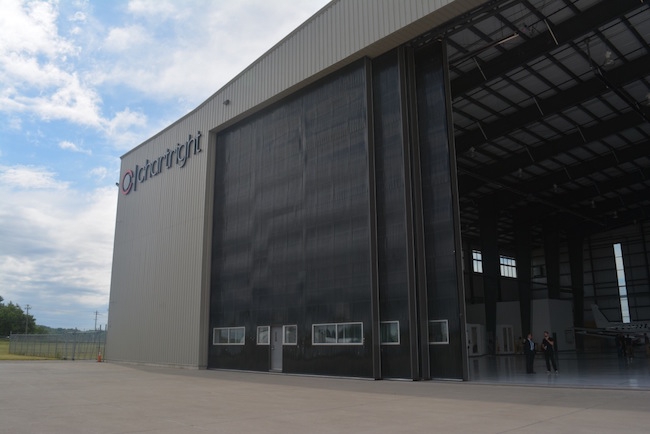 Several members of the Chartright team, the Waterloo International Airport and members of the Canadian business community turned up for the event, which gave attendees a chance to tour select business aircraft and ride on a Leonardo Helicopters’ AW139.

The Chartright hangar/FBO is the latest location for the firm, which specializes in aircraft charters, aircraft management, helicopter services and more. Founded in 1987, Chartright manages more than 30 private business jets and operates in several locations across the country, including Toronto, Vancouver, Calgary, Regina and Timmins. The Waterloo location will offer business owners and travellers a host of services including fuel, hangarage, maintenance, and pilot facilities. Chartright is also relocating its helicopter maintenance business from the Toronto site to the new facility, offering clients a wider variety of services.

The Waterloo facility features more than 50,000 sq. ft. of hangar space, a full-service FBO, office space, parking facilities and more. It’s an intriguing option for business travellers who want to utilize a location near the GTA but don’t want to deal with the higher costs of operating through Toronto’s Pearson International Airport.

“This represents a diversification for us both operationally but also from a service offering point of view,” Adam Keller, Chartright president, told Wings. “Being here in Waterloo means we now have corporate relief from Pearson which is overflowing, but we also have the ability to control our fuel services and our FBO services. That diversity will give us strength but also gives us opportunity because Toronto is just simply full.

Keller notes that the plan initially will be to “basically fill the facility up” with clients. The process will be to take existing clients from Toronto who want to avoid the hustle and bustle of Pearson and give them the luxury of guaranteed hangar space – an issue they will not have to deal with in the roomy confines of the new location in Waterloo. “And with them, we will bringing the maintenance services that we have at the Toronto site,” Keller said. “With the fuel with have here, it offers tremendous value for clients and Chartright – everything is cheaper than it is at Pearson. Fuel, landing fees . . . it’s all cheaper here. Once we become known, this is going to become a large draw for others in the business community.”

Another advantage to the Waterloo locations, Keller noted, is clients do not have to deal with the de-icing snafus business aircraft encounter at Pearson – nor is congestion a problem. “Yes, there are a lot of cost advantages to this airport, but from a positioning point of view, it just makes sense. It is less congested, it is an easier experience – and frankly you are working with an airport that covets business travellers.”

The Waterloo Airport is on the cusp of significant growth – as is the Waterloo business community, particularly in IT development – and Keller maintains that Chartright could be a definite benefactor of this growth spurt in the months and years ahead. “We are hoping to become as valuable to the Waterloo Region a well as they talk about new transportation services. So it’s a great step for Chartright.”

Constantine Tsokas, senior director of maintenance with Chartright, called the new location a boon for clients from a line maintenance point of view due to the immense space and overall organization of the facility. “The ample floor space enables us to be able to drive new and existing business. In Toronto, we are simple challenged for space; this is just a larger scale – the infrastructure is in place here to allow us to do so much more for clients.”

Doing more for business aviation in general is Toering’s goal as president/CEO of the CBAA and he was pleased to announce that Chartright and the Region of Waterloo Airport will be the co-hosts of the 2018 CBAA conference and tradeshow. “Business aviation operates from major hubs but it also operates from regional airports,” Toering said. “Waterloo fits that mold perfectly.”