The rugged de Havilland DHC-2 Beaver is showing few signs of slowing down. 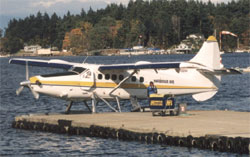 Just like the resilient Douglas DC-3 Dakota that happened before it,
the rugged de Havilland DHC-2 Beaver is showing few signs of slowing
down. Just the opposite in fact. Conversions to a Mk 3 turbo-powered
Beaver, or the installation of Gross Weight Kits to increase the
payload of the Mk 1 piston variety, are giving the aircraft – which
ended production in 1967 – a new lease on life. “There are over 1,600
out-of-production de Havilland aircraft still flying in some of the
harshest climates around the world,” said Rob Mauracher, vice-president
of commercial services for Bombardier’s Commercial Service Centre (CSC)
at Montreal’s Mirabel Airport. “These aircraft have not only earned
their place in history – they continue to write it.”

Bombardier
inherited the de Havilland legacy when it bought the aircraft
manufacturer from Boeing in the 1990s. Mauracher admits that the
company was slow to support its heritage. “Truth hurts, but it also
sets you free.We are now sending out a message that out-of-production
does not mean out of mind at Bombardier,” he told a conference in
Victoria last October, co-sponsored with Field Aviation and Viking, two
of the largest Canadian MROs manufacturing de Havilland spare parts and
carrying out overhauls and conversions.

The de Havilland
Out-Of-Production Conference – which coincided with the 50th
anniversary of the DHC-3 Otter – attracted over 40 parts suppliers and
MROs from Canada and the US. The highlight was a static display on the
general aviation field of Victoria International Airport which included
at least one of every legacy model, along with examples of Turbo
Beavers and Turbine Powered Twin Otters.