Cessna has a well-earned reputation for designing and building aircraft that are rugged, dependable, operator-focused and value-oriented. 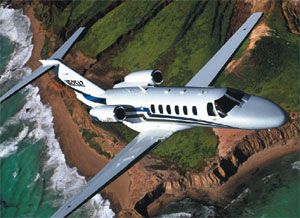 Cessna has a well-earned reputation for designing and building aircraft
that are rugged, dependable, operator-focused and value-oriented. The
CJ (short for Citation Jet) lineup of aircraft from Cessna is part of
the 500 Series product group. Collectively, CJs have become to
corporate aviation what the 172 has been to flight training – valuable
and effective workhorses.

The Citation Jet set a new standard in entry level aviation – a large
cabin, comfortable seating for five, four in a centre club (plus one on
a side facing seat) and two pilots (although providing the option for
single-pilot operations, those flying in Canada tend to be dual-pilot
controlled). The introduction of the CJ1 in 1998 upgraded the Citation
Jet’s avionics to the Collins Pro Line 21 as well as a 200-pound gross
weight increase. The CJ2, also introduced in 1998, moved the bar a
little higher by offering six-passenger seating along with several
other refinements based on feedback from CJ owners and operators.

Currently there are six Citation Jets/CJ1s on the Canadian registry,
one CJ1 on order plus orders for three CJ2s and two CJ3s. The CJ3 is
slated to receive FAA type certification by the second quarter of 2004
in the US and shortly thereafter in Canada.

While the CJ1 seats
five in the cabin, the bigger CJ2 only really adds one more full seat.
A large refreshment centre takes the place of the side-facing seat. All
variants of the CJ come available with a belted privacy lav (which is
not counted in the seating numbers).

The first CJ3 for Canada
is slated for the second quarter of 2006. While still bigger again than
the CJ2, and using a revised wing-root configuration, it still offers
seating for six. The increased space is given to the cabin for legroom;
an optional slim-line refreshment centre enables the addition of an
extra seat. The CJ3 will also have 150 to 200 additional nautical miles
capability. The engines use new digital technology, the thrust controls
having been improved with FADEC (a fully digital system).

Aaron
Hunt is the manager, 500 Series product marketing, for Cessna. He says
the basic performance numbers with three passengers plus a crew of two
allow an IFR range of 1,776 nm on the CJ3 compared to 1,560 nm on the
CJ2. With four passengers and a crew of two, the CJ3 can manage 1,664
nm IFR.