Just days after her June 14 keynote presentation at the Canadian Business Aviation Association’s 2018 convention in Waterloo, Ont., Kathy Fox received a clear endorsement to continue her mandate as chair of the Transportation Safety Board of Canada. She was appointed to lead the watchdog group for another five years, after first taking on the position in 2014. 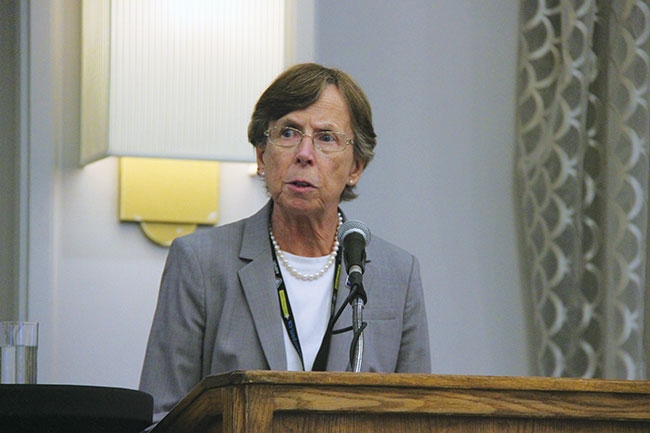 Fox has been actively involved in Canadian aviation for more than four decades, beginning her career in 1974 in air traffic control and eventually retiring from NAV Canada in 2007 as VP of operations, and then stepping onto the TSB board.

Inducted into three aviation hall of fames, and recognized for her contributions to sport parachuting, Fox earned an airline transport pilot licence and represented Canada three times at the world championships of precision flying. It is easy to see the respect she garners from a community gathered to hear about pressing issues in aviation safety.

Today, the International Civil Aviation Organization ranks Canada fifth in aviation safety, behind United Arab Emirates, Republic of Korea, Singapore and France. Fox is anything but complacent, however, walking the CBAA crowd through two accidents that in large part pushed TSB to make a board recommendation for the mandatory installation of lightweight flight recording systems by all commercial and private business operators.

“A board recommendation is the most powerful tool under the CTAISB Act” says Fox, noting Federal ministers must respond to TSB recommendations within 90 days and explain how they will address safety deficiencies. She explains the absence of onboard recorders has been an issue in a number of investigations over the years and in 2013 TSB recommended that Transport Canada facilitate the installation of lightweight flight data recorders on board more commercial aircraft.

TSB’s new April 2018 recommendation, however, changes language from “facilitate the installation” to “require the mandatory installation” of recording systems. TSB also expressed concern with Transport Canada’s reactive approach to oversight of private business aircraft operations, those registered under Part 604. This issue was outlined in an investigation report into the 2016 fatal loss of control and collision with terrain of a Cessna Citation 500 near Kelowna, BC.

This occurrence was highly publicized because the plane carried former Alberta Premier Jim Prentice, who lost his life along with three others onboard. Minutes after takeoff, TSB explains the aircraft entered a steep descending turn and struck the ground. Impact forces and a post-impact fire destroyed the aircraft. No emergency call was made and, because there was no flight recording system on board the aircraft, TSB explains it could not determine the cause of the accident.

“Despite an 18-month investigation, we aren’t much closer to knowing with certainty what caused this accident,” says Fox. “We had no flight data recorder. We had no cockpit voice recorder. These were not required by regulation and, therefore, we have no detailed sequence of what went on in the flight deck. All we have is a hypothesis.”

Fox explains the most plausible scenario is that the pilot, who was likely dealing with a high workload associated with flying the aircraft alone, experienced spatial disorientation and departed from controlled flight shortly after takeoff. The investigation also determined that the pilot did not have the recent night flying experience required by Transport Canada for carrying passengers at night.

As a result of TSB’s investigation into this accident and others, Transport Canada planned to begin targeted inspections of private business operators starting in April 2018. “Investigation reports are our bread-and-butter product. Up until now we have been producing essentially two types of reports, a Class 3 and a Class 2,” says Fox, which might range from 35 pages to 200 pages, respectively. After an internal review, TSB is now starting to issue a Class 4 occurrence classification, which are typically going to be around six pages.

Four such reports have been produced for aviation, including one on Canada’s first collision between a drone and a fixed-wing aircraft (Beechcraft King Air A100) in Quebec in October 2017. Fox explains ideally a longer report would have been produced for this occurrence because of its significance in Canadian aviation, but the drone and its operator were never found. Fox explains the Class 4 is the result of the TSB wanting to be more efficient, make better use of its resources, and be more transparent about how those resources are being invested.