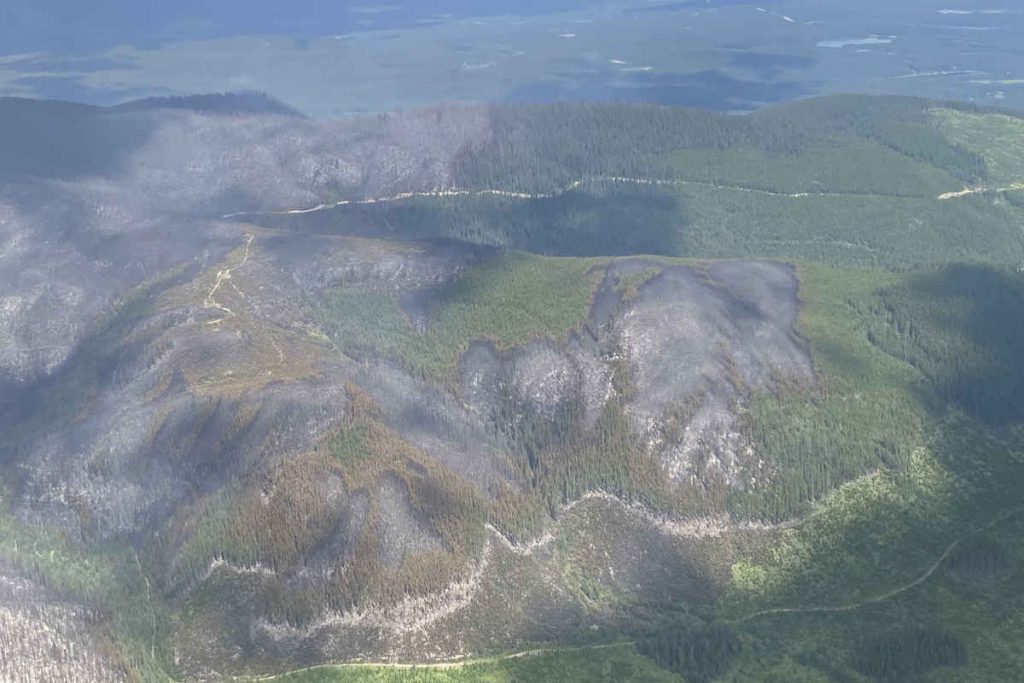 A view of the Black Mountain wildfire on July 23, a day after it was “captured” by wildland firefighters with the help of 11 helicopters, three heavy equipment groups and three dozer bosses. (Photo: Supplied photo, Jasper Fitzhugh)

The Black Mountain Fire that was discovered on July 19 nearly 20 kilometres west of Nordegg is now being held.

The wildfire grew uncontrolled for nearly a week and consumed approximately 507 hectares across a swath of Clearwater County and caused officials to issue evacuation orders.

“The source of the wildfire is still under investigation,” said Colby Lachance, information officer with Alberta Wildfire.

According to the province’s webpage offering updates on the fire, 11 helicopters were bucketing on the wildfire as of July 26, and three heavy equipment groups and three dozer bosses were on site to gain further ground access and build a fire guard.

“We got a couple of fire attack crews, two B.C. unit crews with their strike team leaders and an A rep are also here in Nordegg assisting with operations,” Lachance said.

Wildland firefighters, including 73 who were imported from British Columbia, have been working the fire on ground.

Because of the geography of the area, their work was cut out for them at the beginning.

“Up until July 23, we were relying really heavily on air support,” Lachance said.

“We had at least seven air tankers and multiple helicopters performing bucketing operations due to the fact that it is rough terrain for the crews to start their firefighting operations.”

Todd Lorentz has property in the Misty Valley subdivision on the opposite side of Nordegg and on the south side of the David Thompson Highway, approximately 50 kilometres away from the wildfire.

He was out of the area before the fire started, but he referred to the province’s wildfire status dashboard website to note that the area has been active this year.

“There was a large fire that was burning to the south near the Sundre area as well, but we didn’t see that one either,” he said.

“There’s actually been quite a few fires in that whole Rocky Mountain House area this season so far… but small fires.”

Lorentz noted that the dashboard indicates that “virtually all” of the fires were human-caused with one lightning-related fire so far.

Still, he feels fairly secure that his neighbourhood at least is close enough to help if and when it’s needed.

“We’re kind of lucky where we’re at because the Sundre fire base, which is where they launched the helicopter from, is just about five or six kilometers from us, not far. It’s like living next to the fire station in a sense if you were in the city.”

The wildfire was approximately 40 kilometres from the eastern edge of Jasper National Park.

While Nordegg residents have since been allowed to return, there are still several sites under evacuation orders including the provincial recreation areas at Snow Creek, Dry Haven, Goldeye Lake and Fish Lake among others.

That order will remain in place until wildfire control and containment is achieved. Lachance said that weather conditions could still quickly turn the situation back into danger.

No injuries were reported and no structures and no infrastructure were lost during the Black Mountain fire. There are currently no road closures, but motorists are asked not to stop along Highway 11 between Nordegg and Crescent Falls.

The current wildfire danger for Rocky Mountain House is listed as moderate.