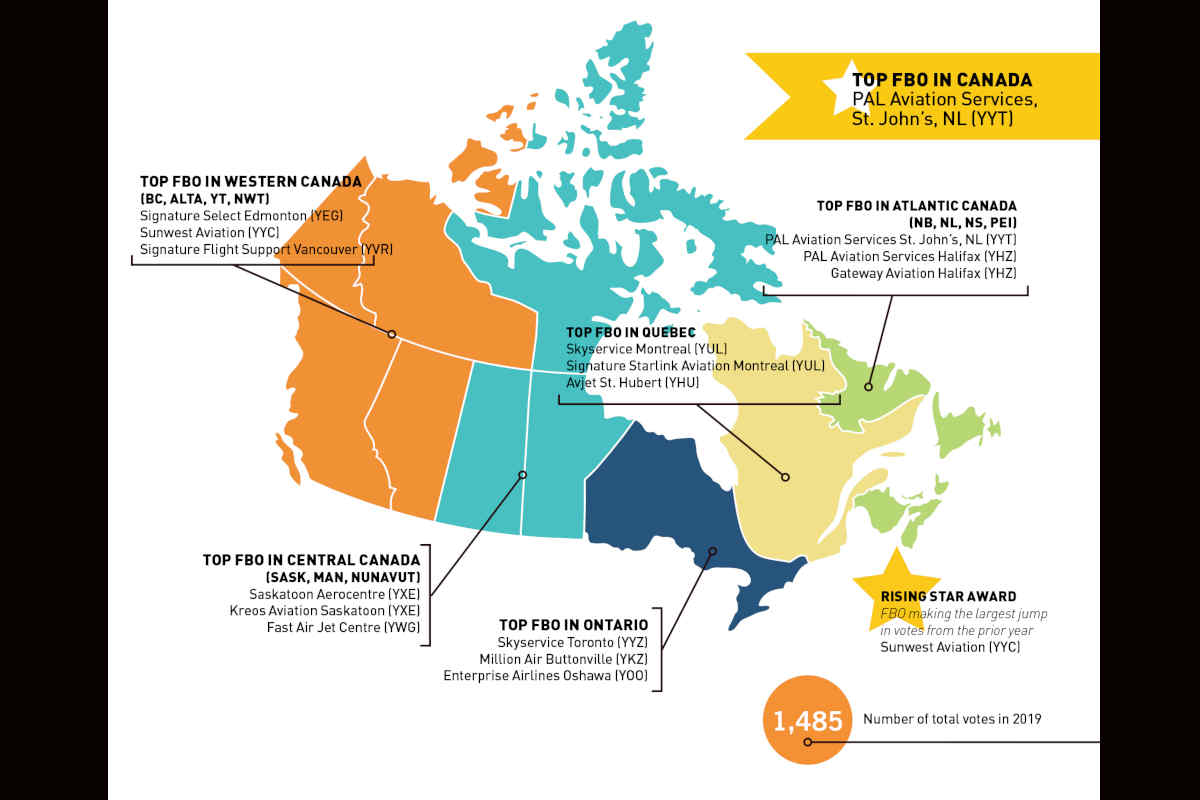 The 2019 Fixed Base Operator survey conducted by WINGS magazine received 1,485 votes, which is a significant increase over last year’s total number of 982 votes. The annual survey provides readers and those who rely on Fixed Base Operators (FBO) the chance to select which facilities, fuel brands and charge/credit cards provide the best service for their aviation needs. Unlike other major North American FBO reports, the WINGS survey focuses specifically on the Canadian market. Respondents are asked select their favourite FBOs based on personal experiences.

In a segment of the aviation industry that is driven by service impressions, as well as price, this ninth annual survey offers a unique view into the progress of Canadian business aviation. The survey was conducted online for eight weeks from mid-May to mid-July.

The FBOs are divided into five regions in Canada to determine the top operation in each, including Western Canada, which counts FBOs in British Columbia, Alberta, Yukon and the Northwest Territories; Central Canada, which includes Saskatchewan, Manitoba and Nunavut; Ontario; Quebec; and Atlantic Canada, which includes New Brunswick, Newfoundland and Labrador, Nova Scotia and Prince Edward Island.

With the end scores tallied, we then determine how the selected FBOs rated overall for their markets – both in the number of times they were selected and in the total scores by attribute. Of the FBOs receiving votes this year, winners are highlighted as being among the Top Three in each region. The overall winner for Canada is then determined based on the total votes cast and across all regions. The survey results also highlight a Rising Star based on the FBO that receives the highest number of votes relative to the previous year.

PAL Aviation Services is the largest FBO in Atlantic Canada, which includes its newest location at Wabush Airport (YWK) situated in Labrador. All three FBO operations are also supported by the expertise and knowledge held by PAL Airlines and PAL Aerospace. To gain a better appreciation of PAL Aviation YYT’s presence in the region, the location operates two dedicated facilities at St. John’s International Airport, including what it defines as a Commercial FBO and an Executive FBO. The Commercial FBO facility in early 2019 completed a major update to provide customers with modern aviation amenities. The separate Executive FBO facility also provides seating areas with modern furnishings and fixtures, extensive aircrew planning rooms, a dedicated executive conference room, and limo and car rental, among other services.

In the Quebec region, Skyservice Montreal YUL, which was named as last year’s Top FBO in Canada, came out on top, followed by Signature Starlink Aviation Montreal YUL and Avjet St. Hubert YHU. In Ontario, Skyservice Toronto YYZ, which has been named as Canada’s Top FBO in previous years, placed first in the 2019 survey. Now under the leadership of Emlyn David, with the June retirement of industry stalwart Marshall Myles, Skyservice Toronto in July of this year broke ground on a new facility, including a 100,000-square-foot hangar and a 20,000-square-foot passenger lounge, scheduled to open at the south end of Toronto Pearson International Airport by the end of this year. In the 2019 FBO survey, Million Air Buttonville, a perennial winner, and Enterprise Airlines Oshawa also placed among the Top Three Ontario FBOs.

In the Central region, Aerocentre Saskatoon YXE was named as the Top FBO, followed by Kreos Aviation Saskatoon and Fast Air Jet Centre based in Winnipeg. Last year, Fast Air was named as the survey’s Rising Star in a very competitive region. This year’s Rising Star, in the equally competitive FBO region of Western Canada, is Sunwest Aviation YYC. Founded in 1986, Sunwest recently played host to the 2019 Canadian Business Aviation Association Conference, which saw one of the highest traffic static displays in recent years. Sunwest itself holds a versatile fleet of more than 30 jet and turboprop aircraft.