The Evolution of Specialty aircraft modifications for amphibious aerial firefighting 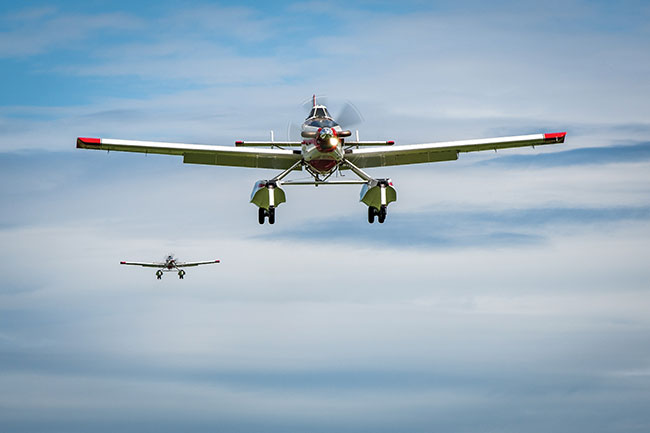 The Conair Fire Boss is an amphibious version of the Air Tractor AT802A with the capability of scooping from water sources near fires. Photo: Tom McKibbon

For more than 50 years, Conair Group’s culture has been to do it better when it comes to aerial firefighting. Over the decades the company has introduced many aircraft types to its fleet, making modifications that improve pilot safety and increase value through quicker response, bigger payload and more precise delivery to support wildfire agencies.

There is not one airtanker in the company that has not been modified to enhance performance. And the Air Tractor AT802A and Wipaire Fire Boss are no exception, with the Conair team taking already great firefighters and making them even better.

Tractor turned fire engine, opening doors
In 1996, Conair introduced the Air Tractor AT802A to Canada as a modern replacement for its fleet of Firecat airtankers. Air Tractor had adapted its agriculture spray aircraft into a nimble aerial firefighter, capable of rapid attacks out of small rural bases with short dirt runways to fight forest fires in remote geography.

Impressed by the effectiveness of the aircraft, Conair became the Canadian dealer, a natural partnership given Conair’s start doubling as both a budworm spraying and aerial firefighting business in 1969.

After a period of use on wildfires, it was discovered that the Air Tractor firegate, the mechanism that holds and releases the suppressant during a mission, could be improved by modifying the doors to produce a higher flow rate of retardant or water so that the drop could penetrate dense timber forests as well as provide shorter, thicker drops for blanketing spot fires. Conair was the first to install a high flow rate firegate with larger doors, providing additional capabilities to government agencies.

The Conair wheeled AT802A fleet has grown to eight aircraft, operating primarily in Alberta and the Yukon. The AT802A is an excellent initial attack tanker that can help extinguish small flames before they grow into beasts. And they operate well during sustained support, often flying in groups of three or more.

From Wheels to Floats
In 2003, Conair took it a step further and invested in the new Wipaire Fire Boss, an amphibious version of the Air Tractor AT802A with the capability of scooping from water sources near fires without having to return to base for refueling for hours.

On this airtanker, the Air Tractor airframe is equipped with a pair of Wipline 10000 series water-scooping floats enabling the aircraft to scoop up to 800 gallons of water in seconds through hydraulically actuated water scoops, one in each float. The agile aircraft can drop low and slow, flying at 105 knots 100-150 feet above the trees to accurately release water to support ground crews, helping to cool flames so firefighters can work towards containment, then ferry fast back to the water source enabling the aerial firefighter to deliver up to 14,000 gallons per hour provided the water source is close to the fire.  Conair has 15 in their fleet, flying throughout British Columbia and Alberta, with each aircraft being serviced and maintained by 2 to 3 Aircraft Maintenance Engineers at remote bases, increased up to five crew during extremely busy periods.

Another impressive tool in the toolbox but Conair learned it could use a retooling to become even better. More power would give the aircraft the ability to fly to fires faster and scoop at higher elevations, often required in western Canada’s mountainous region. 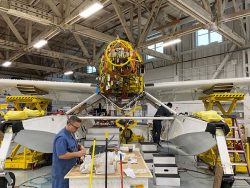 Conair in 2003 realized the Fire Boss was underpowered for the scooping role in western Canada. “We teamed up with Air Tractor and went to Montreal to present to the Pratt & Whitney executive. We successfully lobbied to increase the shaft horsepower output of the PT6-67F engine from 1,350 to 1,600 SHP. They had just developed higher heat components for a military trainer aircraft and were able to apply that technology for the agricultural variant of the PT6-67F engine,” explains Larry Pahl, director of engineering, Conair.

The first engine was purchased for Conair and installed into an AT802A. Conair flew the aircraft to Wipaire where the floats were installed. The newly converted Fire Boss then flew to Canada where Conair took the initiative to complete the required certification flight tests to achieve an STC to the greater horsepower. The TCCA issued the STC to Conair to operate the Fire Boss for the first time at 1,600 SHP, providing a huge safety and efficiency improvement for Fire Boss operations at higher altitudes, which are prevalent in western North America.

The PT6-67F engine is installed in all Conair Fire Bosses and four wheeled AT802As. The 1,600 SHP means the aircraft climb faster, reducing the time from the target to the base. The performance improvement was obvious – the AT802A often beat the Firecat to the fire.

Room for improvement
Conair also discovered through operational experience that it was difficult to get the loaded aircraft off the water on hot days at high altitude lakes. In this scenario, the ground speed required on the water to get enough lift in thin air was too much for the power available. Taking action, the company outfitted sensors on the aircraft and their engineers studied the data to investigate why energy was being lost during the scooping phase. They discovered that speed was being reduced due to drag caused by the scoop and the cavity in the float where the scoop opening was outfitted. 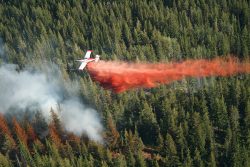 A Conair Air Tractor working in the Kootenays. In 1996, Conair introduced the AT802A to Canada as a replacement for its Firecat fleet. Photo: Tim Garrish

Conair’s design team set out to create an entirely new smaller scoop that maintained fill rate yet streamlined the float to eliminate the drag. The group installed three scoop designs on float hull designed and built by Chuck Karassowitsch. They instrumented the test hull and towed it using a boat on Harrison Lake to determine which design had the most promising results. Brad Belyan and Brad Schull worked with Claude Marchand, the sponsor of the new scoop initiative, to install the prototype design and study its operation, investigating how to optimize its sustainability over its first season in 2017.

Using operational data, they then 3D printed five more variants of the scoop to configure the best design to maximize flow rate while minimizing drag. Their recommended changes were incorporated into the prototype and operated for a second year to confirm that the team was headed in the right direction in terms of creating a more efficient scoop. After the second year of successful operations the program moved into the production phase, installing the design on two aircraft in 2019 and six in 2020. The final six installations on Fire Boss fleet will be completed this year. Each installation takes 725 hours, typically completed by a group of four Aircraft Maintenance Engineer over four weeks.

Less drag, better flow, future forward
Gulfstream iIn order to maintain flow rate during the scoop phase with the new smaller scoop opening, Conair modified the flow of the water from the scoop to the hooper by eliminating the sharp 90-degree elbow in the original pipe design. Instead, the company installed a more gradual angle splitting into two pipes versus one to get the water into the hopper faster. In addition, gaps around the scoop itself were closed with a better design to reduce water suction, enabling steady speed.

The scoop and pipe modifications mean there is now very little drag and vibration on the airframe, creating a more efficient Fire Boss with less chance of airframe fatigue in the future and improved pilot safety. “The new scoop hydraulic system is also more maintenance friendly and, ultimately, more reliable. Access to components inside the floats have also been improved,” adds Ray Zurowski, an Aircraft Maintenance Engineer (AME) at Conair. Twenty AMEs inspect and maintain the fleet of 23 AT802s over the winter, completing 25,000 hours of maintenance.

Conair knows there is always something that can be done better. As a team they work with their customers and industry partners to look for ways to improve, sharing ideas and experiences in order to create solutions. Further development of Conair’s Training + Tactics Centre is next in the works, with Conair investing in simulation tools that recreate true-to-life aerial firefighting missions. Their AT802 FTD has been certified to Level 5 and they are in the process of creating five fully networked FTDs with reconfigurable cockpits and simulation flight dynamics so that pilots can train in teams, as the aircraft are generally dispatched in small groups on aerial firefighting missions. Great can always be better. | W