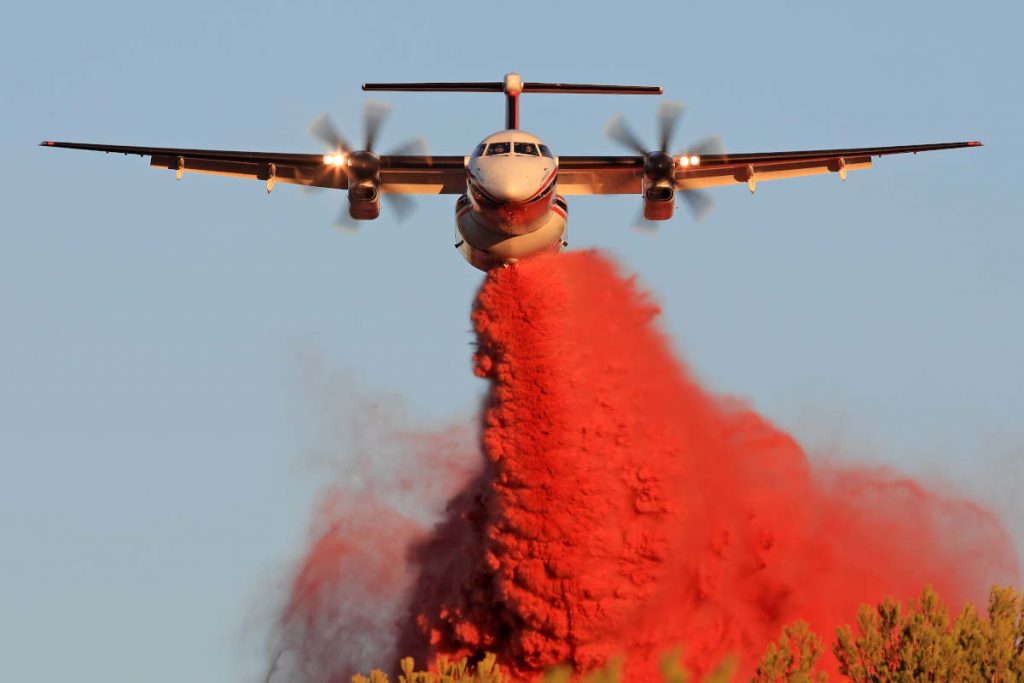 Engineers at Conair designed the Q400AT tank to deliver a 10,000-litre payload at any Interagency Airtanker Board coverage level. (Photo: Alexandre Dubath, Conair)

Conair Group’s first Q400AT, engineered specifically for aerial firefighting, has touched down at Bundaberg Airport, Australia. The specialized airtanker is on contract with Queensland Fire and Emergency Services for aerial dispersion of retardant, suppressant, or gel products, as well a supporting agency objectives and firefighters on the ground in efforts to contain wildfires.

Conair explains its specialized Q400 airtanker produces 30 per cent less emissions than aircraft of similar size, exceeding current environmental standards for carbon dioxide (CO2), hydrocarbon, nitrous oxide and smoke emissions. With results that are below levels mandated by the International Civil Aviation Organization (ICAO), the aircraft also offers the lowest fuel burn per litre hauled. The Q400AT uses only 58 per cent of the fuel, while carrying 88 per cent of the load of a typical Type I airtanker, according to Conair, resulting in less CO2 emissions into the atmosphere.

Conair explains the aircraft’s sustainable features do not come at a cost to aerial firefighting performance, pointing to the Q400AT being outfitted with a custom, purpose-built tank. The team of engineers at Conair designed the tank to deliver a 10,000-litre payload at any Interagency Airtanker Board coverage level, using an advanced, proprietary constant flow Retardant Delivery System (RDS). The tank is equipped with a standard single point filling receptacle on both sides of the tank allowing for a 2,250 litre per minute fill rate from either side of the aircraft.

With a loaded cruise speed of 360 knots at up to 18,000 feet, Conair notes the Q400 is the holder of three climb-to-time turbo-prop records. The company explains this fast climb to cruise time results in reduced block time from base to fire and return. The aircraft is designed for both Initial Attack as well as Support Actions, offering tactical flexibility, with a take-off run requirement of 1,396 metres when loaded, regardless of density altitude. Conair also points to the Q400AT’s strong turboprop speed control, capable of consistent drop speeds even in steep, rugged terrain and diverse geography.

To enhance its aerial firefighting performance, the Q400AT flight deck is equipped with a Conair developed and Transport Canada-certified Flight Envelope Awareness System, which provides pilots with enhanced safety awareness information, such as instantaneous G-Loading, slow speed awareness and angle of attack detail, along with flap configuration over-speed awareness.

“We evaluated 29 aircraft before selecting the Q400 for modification into an aerial firefighting tool,” said Jeff Berry, director of business development, Conair. “The unanimous opinion of our flight operations experts is that the Q400 is an airtanker pilot’s airplane, exceeding all the next-generation performance criteria within a maneuverable and stable platform. The Q400AT is the most advanced, green aerial firefighting airtanker available.”

Conair is currently producing both the Q400AT aircraft dedicated to aerial firefighting and the versatile Q400MR, featuring a multi-role ability to quickly be reconfigured between airtanker, cargo, passenger, combi-transport or medical evacuation missions.

With more than 70 aircraft, Conair operates the largest, privately owned, dedicated fleet of fixed wing firefighting aircraft in the world. Conair’s operations extend across North America, Europe and Australia. The company has modified more than 175 individual aircraft across 15 aircraft types for conversion to aerial firefighting.