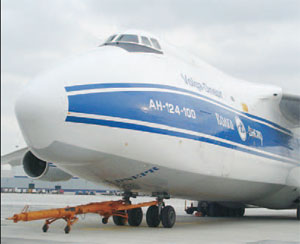 The Martin government has taken several considerable hits over its
response to the tsunami crisis. Much of it was unfair. Like other
developed countries caught unaware over the Christmas holiday, the
Canadian government took a measured response that escalated as the
scope of destruction was realized. Where the Liberal government must
take its lumps, however, is the lack of military transport capacity
needed to get the job done.

Former
prime minister Jean Chretien’s stubborn refusal to re-equip the
Canadian Forces with new helicopters after cancelling the original
EH101 contract may have bordered on criminal neglect, but it is one
symptom of a larger disease: a general malaise in this country toward
military spending. Successive governments in Ottawa have relied on this
attitude as an excuse to starve the Canadian Forces while dispatching
our stretched troops to global hotspots and danger zones with obsolete
equipment.

While Canada’s military chugs around the world
onboard the oldest fleet of heavy lift transports among developed
nations, Canada’s Prime Minister jets from capital to foreign capital
lecturing on how the world’s richest nations must improve emergency
relief response times for natural and man-made disasters. It must be a
public relations exercise targeted for a home audience because it is
difficult to spot where the Canadian government is leading by example.

Bureaucrats
and politicians dithered for two weeks over when and how to mobilize
Canada’s ‘rapid response’ Disaster Assistance Relief Team (DART). By
then, Air Canada had already pulled an Airbus A340 out of service,
leased an MD11 freighter and was transporting aid workers and emergency
supplies to the disaster area on behalf of World Vision and other
relief agencies.

Within days of the disaster the need for more
helicopters was apparent. “We are relying on the helicopter system
because that is the only way we can reach the most remote areas,”
Michael Elmquist, head of the United Nations disaster relief operation
in hardest hit Indonesia told the BBC. The United States military
responded by doubling the number of helicopters it dispatched to 90.
The UK transferred two aircraft to the UN relief effort. Canada, a
Pacific as well as Atlantic nation, has no helicopters to offer.

Paul
Martin has promised an overhaul of Canada’s foreign policy including
improvements in the government’s ability to respond to crises abroad.
Hopefully that review includes modernizing Canada’s heavy lift
capabilities.

A well-equipped military will not transform Canada
into a hawk nation. But inadequate equipment including a shortage of
military transports and helicopters will compromise our ability to keep
the peace and respond to future disasters such as earthquakes, famine
and flood.

Unfortunately, there will be no shortage of work.
According to some experts natural disasters have increased fivefold in
the last 40 years, from 100 a year in the 1960s to 500 a year since
2000. Not all will attain the geographic expanse and casualty rate of
the tsunami crisis, but most will hit the poorest and most vulnerable
regions of the world, requiring immediate humanitarian aid from rich
nations such as Canada.

And Canada will respond. The Canadian
Forces Airbus that flew out of CFB Trenton on January 6th (right behind
a rented Antonov 124 transport airplane carrying essential supplies)
was carrying skills and expertise that are among the best in the world.
But Canadian disaster relief should not be sitting on the sidelines
while our government scrambles to either rent equipment or hitch rides
on transport aircraft flying the flag of better-equipped allies such as
the United States and Australia.