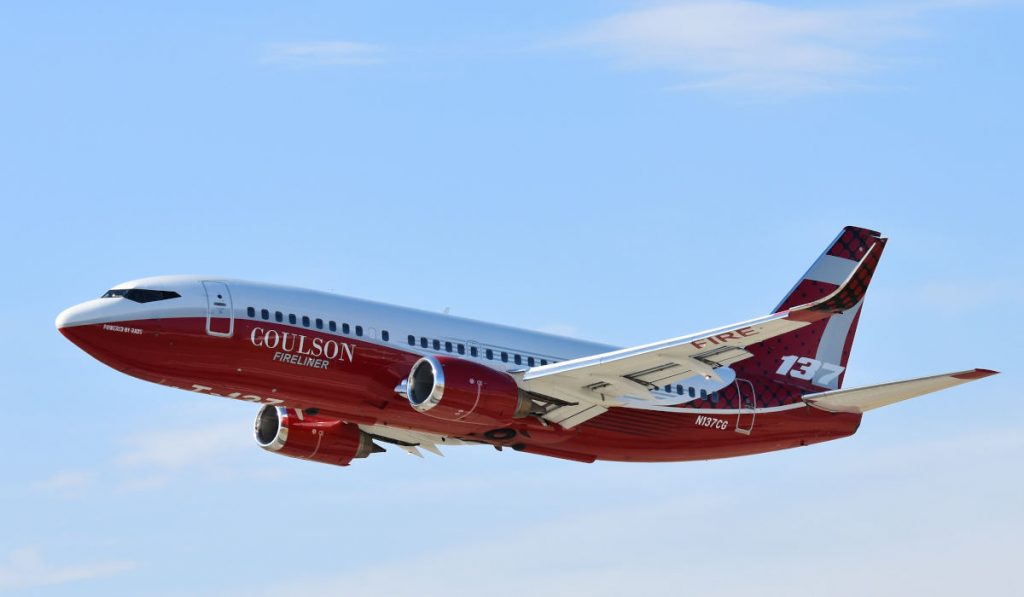 It takes more than 43,000 hours to convert a 737 into a FIRELINER. (Photo: CNW Group/Coulson Aviation)

Coulson explains it is the first in the world to modify Boeing 737s into FIRELINER aircraft, which utilize a new delivery system, the RADS-XXL/2, specifically designed for this application. To convert a 737 into a FIRELINER takes over 43,000-man hours, explains Coulson, and includes the RADS-XXL/2 installation, avionics upgrades, full strip and re-paint, new interior, and 72 refurbished passenger seats.

The FIRELINER, according to Coulson, is differentiated from other next generation large air tankers by its ability to transport firefighters without re-configuration, as well as the ability to fly at maximum speeds and altitudes with a load of retardant and no restrictions.

“This firefighting repurposed Boeing 737 was designed, manufactured and had the installation of the tanking system done in house, which is a testament to the creativity of our teams led by Britt Coulson,” said Wayne Coulson, CEO, Coulson Group, who notes both the company’s Lockheed C-130s and Boeing 737 FIRELINERs played keys roles in saving homes and lives in Australia during last year’s fire season.

“The FIRELINER is truly the next generation of next generation large air tankers,” said Britt Coulson, president and COO, Coulson Aviation. “The FIRELINERs are a perfect complement to our C-130s and having a diverse fleet assures our customers always have the right airtanker for the mission.”

With more than 36 years of experience in aerial fire suppression, Coulson Aviation today has operations in Australia, Canada, Chile, and the United States.