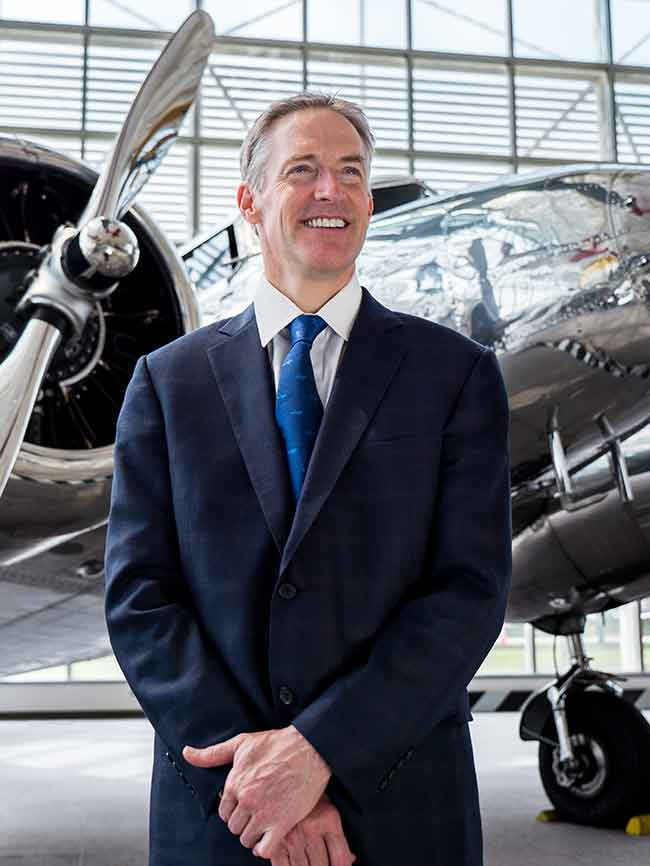 I’ve been given a second chance in life. I can work Charles Lindbergh made history when he flew non-stop from New York to Paris on May 20-21

“I knew it was safe, because someone else did it 75 years before me,” Erik said during an address at the AHS Sustainability 2015 Conference in Montreal last September. And like his grandfather, he kissed the ground when he landed at Le Bourget.

“Aviation is developed by two things – warfare and prizes (Charles won $25,000 for his feat). More children dream of being a pilot or astronaut than any other career. But noise is bad. It impairs learning which led me to create Powering Imagination,” an organization that promotes innovation in energy and aviation sustainability. It tries to influence the future of aviation by collaborating with innovators in electric flight, biofuels and noise reduction. One of its main objectives is to create a test aircraft for test flights over noise-sensitive areas to promote quiet flight solutions. There is even an annual Lindbergh Prize for the quietest aircraft.

“How do we leverage all that for the next breakthrough? By creating the (pure battery electric) e-Spirit of St. Louis to fly over places like the Grand Canyon in a quiet electric plane,” Lindbergh says. “I’ve been given a second chance in life (he suffered from rheumatoid arthritis which crippled him for 15 years). I can work, I can play, and I can travel the world.”

To demonstrate the possibilities of innovative initiatives, Lindbergh was planning to recreate a flight his grandparents Charles and Anne Morrow did in 1931 in a floatplane from the U.S. to China via Canada, Siberia and Japan. To mark the 85th anniversary of that journey, Erik was planning to fly an aircraft powered by biofuels in 2016. That project has been put on hold.

The e-Spirit of St. Louis is not completely assembled but most of the components are in Daytona at Embry-Riddle Aeronautical University which is heavily involved in the project. “We’ve got all the parts and pieces down in Daytona – airframe, motor, props,” notes Lindbergh who has an Aeronautical Science degree from Emery Aviation College in Colorado. “We’re working on software integration, but we still need batteries,” Lindbergh says. “We need $25,000 worth of batteries and we’ve got grad students working on it. It’s a cool project, leading edge and we’re going to use it to fly over national parks and noise sensitive areas and talk about what the future is in aviation.

“We’re hoping for first flight in the first quarter of 2016. It looks relatively straight forward, but you never know what’s going to get in the way of that. But hopefully, by late summer, we’ll have completed all the test flights we need to do and take it around and demonstrate it.”

The airplane is expected to reach a top speed of 100 mph with a 90-minute range. “It’s nothing spectacular, but it’s an uncommon aircraft. We’ve got to use an aircraft that his high L (lift) over D (drag), because batteries are just so heavy.”

While this type of technology is in its infancy, Lindbergh believes this is no mere flight of fancy. “Some companies are already putting out a similar looking, similarly configured aircraft and they’re trying to prototype a two-seater that they can use for the training market. So they’re looking at production and other companies are looking at that. “But we don’t see it as our job to go into the aircraft manufacturing business. We want to showcase what can be done and help incentivize and accelerate the industry.”

Surely there’s a limit on the size of aircraft that can be battery powered and we’re certainly not talking 747-size aircraft. Maybe yes, maybe no, according to Lindbergh.

“Not yet,” he says. “Some people say that will never happen, some people say we’re electrifying all the systems slowly and yes, it’s going to happen. Others say hybrid. I’ve had two guys in the industry say we can do electric supersonic aircraft. Who knows if they’re blowing smoke.

“Elon Musk, the founder of Tesla Space X, says he’s got a design for an electric airline transport category aircraft,” Lindbergh says. “He won’t tell us what it is, but there are people talking about it. But I don’t know, because I’m not an engineer, so I can’t see that. But I want to help it go as far and fast as it can, because it represents something for the sustainability of the aviation industry – and that’s critical.”