Fewer frontline staff and greater digital connectivity. That is the vision of airports presented by SITA, a member-based air transport industry communications and IT group. “Not necessarily fewer staff,” corrects Paul Houghton, SITA vice-president of the Americas in an interview with Wings. “But more staff redeployed to solve different sets of problems.” 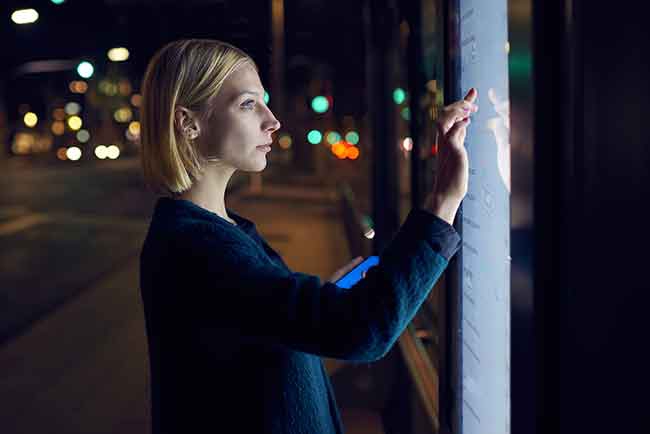 Providing smart technological solutions for passengers is what SITA is all about. Fewer frontline staff and greater digital connectivity.

Tucked inside a lush ancient forest outside of Brussels, delegates and presenters at the annual SITA Air Transport IT Summit hashed out the industry’s place in the “Internet of Things” (IoT), the buzz phrase given when physical objects such as airport equipment, luggage, trolleys . . . and increasingly passengers . . . are linked together by the internet, giving the traveller an unprecedented level of control over the journey and airlines and airports equal insights into passenger flow and behaviour.

Like CES, the annual global consumer electronics and new gadgets trade show held every year in Las Vegas, the SITA Summit is a shop window for leading edge passenger processing and management tools, and information gathering technology for the air transport industry.

Passengers already use self-service kiosks to check-in, tag and leave their luggage at common bag drops. Today, 49 per cent of passengers still use the traditional check-in desk; that number is expected to shrink to 29 per cent by 2018, while the number of passengers using the smartphone to check-in and as an e-boarding pass will jump from nine per cent today to 24 per cent by 2018, bypassing web check-in as the number two choice.

“The revolution has only just begun,” says James C. Cherry, chief executive of Aéroports de Montréal (ADM), Airport Council International’s chair of the board for North America and a SITA presenter. “Now we are moving into a new wave focused on a more personalized travel experience closely linked to the passenger’s needs. This wave is exploiting technologies and innovations that rely on travellers being constantly connected, combining the power of smart mobile devices with self-service.”

ADM is seen as a self-service pioneer; Montréal Trudeau was one of the first airports in the world to introduce a self-tagging baggage feature (more than two-thirds of passengers at Trudeau check-in using a self-service option), one of the first in Canada to fully deploy automated border control (ABC) and the automated passport control (APC) kiosk, self-service system for clearing customs and immigration, and has recently rolled out a new “response design” web site that delivers information about the airport and flights across a multitude of devices, including tablets and smartphones.

“Self-service will be tied ever closer to the individual,” Cherry adds. “It will feature exciting new concepts such as single passenger tokens using biometry, bar codes or other digital bag tags, home-printed bag tags, automatic check-in at time of ticket purchase and wearable technologies such as Google glasses and the Apple Watch.”

Indeed, much of Quebec appears to be embracing the technology revolution. At the Summit, Québec’s Jean Lesage International Airport unveiled the world’s first use of the Apple Watch for an airport workforce. The watches will connect with SITA Airport Management – a system that enables an airport to control all operations from a single central control centre – and provide regular operational alerts to duty managers.

“Wearable tech is one area of interest to us,” says Marc-André Bédard, vice-president of information technology for Aéroport de Québec. “Our duty managers may get an alert to say that two planes are arriving simultaneously and have been assigned to the same gate, or that there is a delay at a certain gate. Previously, they would have checked their tablets regularly for updates. With the watch, a vibration alerts them to an update so they receive vital information just by glancing at their wrist. They can then take immediate action.”

Approximately 83 per cent of travellers carry a smartphone. Wearable technology such as Google glasses will carry the revolution forward, but will also present challenges at security points, especially technology embedded into clothing. “Most airport security systems are not equipped for passengers who are wearing six pieces of wearable technology,” Rohit Talwar, chief executive of Fast Future Research, a U.K.-based trend analysis consultancy points out.

It also illustrates that with so many moving and added parts, there are still major obstacles in the way of the so-called “joined up” journey, including cooperation between airlines and airports in areas such as ensuring that both are pushing the most accurate information on flights and delays out to the passenger.

“The industry has not been all that great in sharing information,” Thomas Windmuller, senior vice-president of airport, passenger, cargo and security for the International Air Transport Association (IATA) says. “It is born out of mistrust and applying every request for information sharing against the big book of ‘no’ .”

“As an airline, I find it incessantly difficult to get information from the airport,” says Simon Lamkin, head of operations systems for U.K.-based low-cost carrier easyjet. “Something as simple as gate information for example.”

So short of couples’ therapy, how do airports and airlines learn how to play nice? “Stakeholders need to see the value in information sharing,” ADM’s Cherry points out. “Airports are the one single point where all stakeholders converge. We are working to show them the value. The trust will come as the value is realised.”

Cherry points to the Sunday immediately following the annual Formula One race in Montreal – one of the most popular races on the calendar, and one of the busiest days at Trudeau – of all stakeholders working together. “They trickle in over two weeks and all want to leave 20 minutes after the race, and we have never had an issue. The trick is our seemingly unlimited capacity to cooperate.”

“We have found that governments are more open minded in the use of technologies,” adds SITA’s Houghton, pointing to the Canadian government’s work on APC kiosks for Canadian and American passport holders going to the United States, reducing processing times at Trudeau by 40 per cent.

The Intelligent Airport is all about streamlining the passenger experience. An airport app should notify the traveller of parking delays, flight information and gate allocation (gradually squeezing out the venerable flight information boards) and baggage updates. “Flight displays are on their last legs and airports will never have to replace them,” Windmuller predicts. “Passengers will rely more and more on the smartphone, which will give flight information without the clutter.”

Right now, 10 per cent of airports can provide baggage location status updates; seven per cent offer real time baggage status information for passengers, and a wafer thin two per cent offer missing baggage communication. That is expected to explode by 2018 to 70 per cent, 63 per cent and 64 per cent respectively.

At the same time, lining airport
entrances, passenger corridors, inter-terminal transport systems, retail, baggage claim etc. with proximity sensors or beacons – some the size of a USB stick – will put even more information in the travellers’ hands while potentially smoothing out bottlenecks with real time information on passenger volumes at security checks and walking distance to gates, relying on sensors to detect the presence of nearby objects.

“Proximity sensing is poised to have a major impact on industry operations,” says Renaud Irminger, head of SITA Lab. “In a phrase, proximity sensing connects the digital world [mobile devices] with the physical world [location].”

Providing smart technological solutions for passengers is what SITA is all about.

Working with SITA Lab, Miami International Airport is the first in the world to have a complete and open deployment of beacons throughout its facility. “We now have a way to let people know how far things are, how long it will take to wait or walk, what services are around that they may be interested in, based on the length of their stay,” Maurice Jenkins, the airport’s director of information systems and telecommunications says.

Beacons are not only providing customers with information at a glance, they are also enabling the airport to reduce operating costs. “Miami is blessed with beautiful, sunny weather,” Jenkins says. “But as a result, our energy costs for air conditioning are extremely high. With beacons, it is now possible to micro-manage the airport’s air conditioning system to economize on our energy costs.”

Airport retailers at Miami are recognizing the value of beacons and are enabling duty free shops, restaurants and other services to push out coupons and special offers to passengers.

It is expected that airport retail strategies and the use of beacons will help airports increase non-aeronautical revenue at a time when airlines are putting greater pressure on airports to reduce fees. While the Summit was on, the chief executives of Europe’s five largest airline groups – Air France/KLM, International Airlines Group (British Airways and Iberia), Lufthansa Group and Ryanair called for the development of a new European Union (EU) Aviation Strategy that would include cutting airport costs. “Lowering the cost of the EU’s airports by ensuring that monopoly airports are effectively regulated, ensuring that passengers receive the full benefit of the commercial revenues which they create at airports,” the executives said in a joint release.

Dubai Airport is working to solve the problem of airside customers spending too much time in its lavish shops, using existing technology to let a passenger know the time remaining and walking distance to the gate once a boarding pass has been run through the point-of-sale terminals.

But how much information is too much? “Passengers are hungry for information. Passengers are not hungry for endless raw data,” Allison O’Neill, SITA vice-president of passenger solution line points out. And how many apps? Dr. Michael Kerkloh, chief executive of Flughafen München (the only airport with its own brew pub) estimates there are approximately 54 apps covering 164 airports. Road warriors will likely have 10. There are 17,000 apps that have the word “travel” in them. So how do you sort through the maze? “The party that has the best data for the passenger, presented in a user-friendly manner that delivers the most value,” is the one that will gain the most eyeballs, according to IATA’s Windmuller.

Connecting to IoT will have impacts beyond individual airports. Miami’s Jenkins believes that beacons will be installed in stadiums, shopping malls and concert halls with airports leading the charge. The bad news for both Canadian airports and airlines that are already witnessing the steady drip of passengers draining into the lower-cost U.S. transport network is that passenger experience technology and a thinning of the border with ABC/APC may streamline the journey.

For airports, increased self-service, beacons to improve passenger flow, apps to reserve terminal parking spaces, digital bag tags and real-time bag tracking will minimise delays and reduce congestion in the terminal building and make more effective use of airport real estate. “There are two institutions famous for queuing, the airport and the post office,” says Griffiths. “My ambition is to leave the monopoly of queuing to the post office.”

It will not just be a technological revolution, it will take a revolution in processes and operating cultures, something that Griffiths says is long overdue. “There are all sorts of ways we will be able to optimise all parts of the journey. There will have to be changes. Airlines are going to have to be more giving of information such as transfer passengers.”

Cherry insists that the heavy lifting is well underway. “We are building the foundations of the Intelligent Airport. But robust infrastructures, integrated systems and industry standards will be essential for success. Let’s work hand-in-hand with all stakeholders to make this happen.”

Fast Future Research’s Talwar underlines the sense of urgency; “our window to see what is happening in the market place and whether we should play is rapidly thinning.”