Mark Crha is on top of the world these days and for a very good reason. 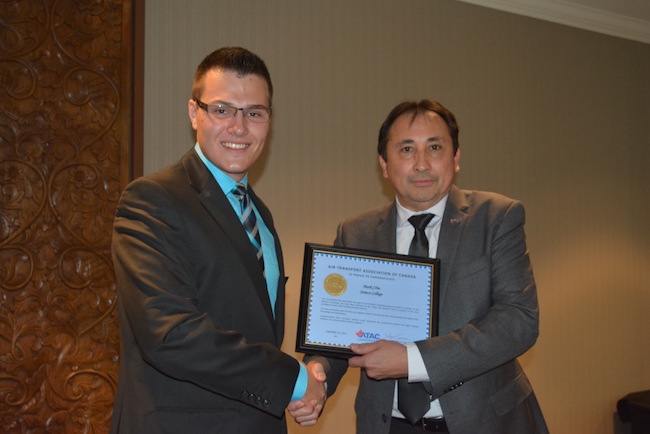 The Seneca College student and Eastern Ontario Region representative in the 2016 Webster Memorial Trophy Competition recently captured the 2016 Webster title, beating out a strong contingent of amateur pilots from across the country.

Michael Bryson, Manitoba region representative who flies with Harv’s Air in Winnipeg, is this year’s runner up. Michael’s brother Andrew Bryson was runner up in 2014.

Maxine Brignell, the Western Ontario representative, was this year’s winner of the NAV CANADA trophy, handed out to the candidate that tops the NAV CANADA written exam. Brignell, who scored a 93 per cent on the test, recently graduated from Sault College in Sault Ste. Marie.

Executed flawlessly this year by the efficient and thorough team at the Brampton Flight Centre in Brampton, Ont. the Webster brings together the top amateur pilots in Canada for a spirited week of learning, flying, camaraderie and fun. It’s a true celebration of what’s great in aviation, and the competition is intense. Contestants must conquer a variety of tasks including a written exam, flying test and much more.

Wayne and Amy Foy, stewards and leaders of the program for the past 10 years have worried tirelessly over the years to piece the program together and bring on board an impressive array of high-end sponsors and supporters, including Air Canada, Flight Safety International, Sennheiser, Transport Canada, the 99s, Redbird Flight Simulators, NAV CANADA, Jazz Aviation, KF Aerospace and many more. Wings magazine has been a supporter of the program for years, and takes great pride in covering the achievements of the young aviators. The Webster winner and other competitors annually receive numerous awards and prizes from program supporters.

The Webster continues to flourish thanks to the involvement of its many supporters and associations, and will move into a new phase next year with the retirement of Wayne and Amy Foy. The hardworking couple are stepping away from the program, but its new national administrator, Brenda Reid and her team, are already planning next year’s event.

The 2017 Webster Memorial Trophy Competition is already in the works. The Mitchinson Flight Centre in Saskatoon, Sask. will host the event, dates to be determined.