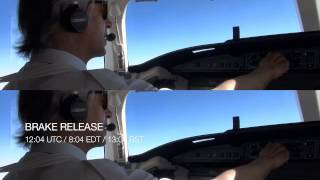 In May, Dassault Aviation’s Falcon 7X set a new transatlantic speed record, flying between Teterboro (KTEB) and London City Airport (LCY) at an average speed of Mach 0.88. It completed the trip in five hours and 54 minutes, landing easily within the short 4,000 foot runway at London City Airport. The record has been sent to the Fédération Aéronautique Internationale in Switzerland for recognition as an official world record. The Falcon 7X provides the longest range of any business jet out of London City, allowing it to easily serve destinations as distant as New York or Dubai.