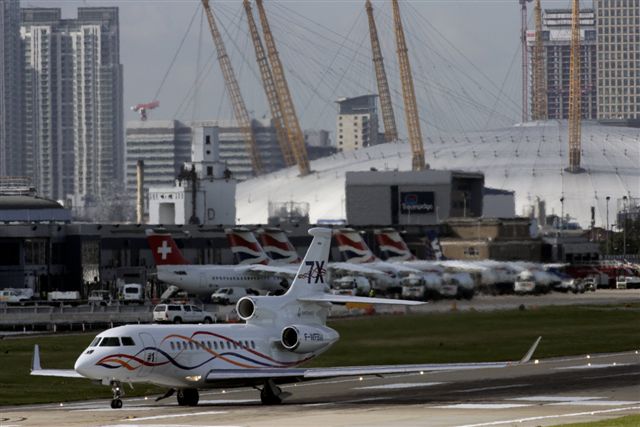 Feb. 25, 2009, Teterboro, NJ – Dassault Falcon announced today that the Falcon
7X recently received approval for arrivals and departures at London City Airport (LCY)
in London, England. The 7X offers the most range and cabin size of any business jet
permitted to fly into and out of London City and links the heart of one of the world’s
largest financial centers with nonstop access to the United States, Europe and the Middle
East.

“Flying into London City was a goal from the early development of the Falcon 7X
program,” said John Rosanvallon, President and CEO of Dassault Falcon. “During these
times, speed, access and efficiency are paramount to all of our customers and this
approval will help ensure 7X operators can remain one step ahead of their competition.”
To operate to and from London City Airport, an aircraft must demonstrate exacting
performance in order to approach, land and take-off on the airport’s short runway (4,327
ft/1,319 m at landing and 3,934 ft/1,199 m at take off) located in the heart of London. It
also has to meet strict environmental standards that manage aircraft noise. In the case of
the Falcon 7X, the noise level was measured in the same category as a much smaller
turboprop.

The operational process for London City approval began in April of 2008 when Dassault
was granted steep approach certification for the Falcon 7X from the European Aviation
Safety Agency (EASA). The steep approach procedures require a glide slope of 5.5
degrees as opposed to the standard 3.0 degrees. Approval flights at London City were
performed on October 10, 2008. Dedicated Noise Abatement Departure Procedures
(NADP) were developed and approved by the EASA’s Joint Operational Evaluation
Board soon after.

“Flying into London City requires precision and stability in the handling and speed of the
aircraft,” said Philippe Deleume, Chief Test Pilot for Dassault Aviation. “And the digital
flight control system on the Falcon 7X helps to ensure those requirements are met while
landing and departing from one of the world’s most challenging airports.”
A pilot training curriculum was developed in conjunction with CAE and is currently
offered at their Burgess Hill facility in the United Kingdom and will be offered shortly in
their Morristown, New Jersey facility in the United States. The curriculum focuses on
general airport knowledge, steep approach landings and noise abatement departures in
CAE’s full motion simulators.

Announced at the Paris Air Show in 2001, the Falcon 7X was simultaneously certified by
both the EASA and FAA on April 27, 2007. It features the award-winning EASy Flight
Deck and is powered by three Pratt & Whitney Canada PW307A engines. It has a range
of 5,950 nm (eight passengers, M.80 with NBAA IFR reserves) which can comfortably
connect 95% of the commonly used business aviation city pairs. It now joins the Falcon
900, Falcon 50 and Falcon 10 family of aircraft with London City Airport approval.

Dassault Falcon is responsible for selling and supporting Falcon business jets throughout the
world. It is part of Dassault Aviation, a leading aerospace company with a presence in over 70
countries across 5 continents. Dassault Aviation produces the renowned Mirage and Rafale
fighter jets as well as a complete line of Falcon business jets. The company has assembly and
production plants in both France and the United States and service facilities on both continents. It
employs a total workforce of over 12,000. Since the rollout of the first Falcon 20 in 1963, over
1950 Falcon jets have been delivered to more than 65 countries worldwide.
The family of Falcon jets currently in production includes the tri-jets—the Falcon 900DX,
900EX, 900LX and the7X—as well as the twin-engine Falcon 2000DX and 2000LX.