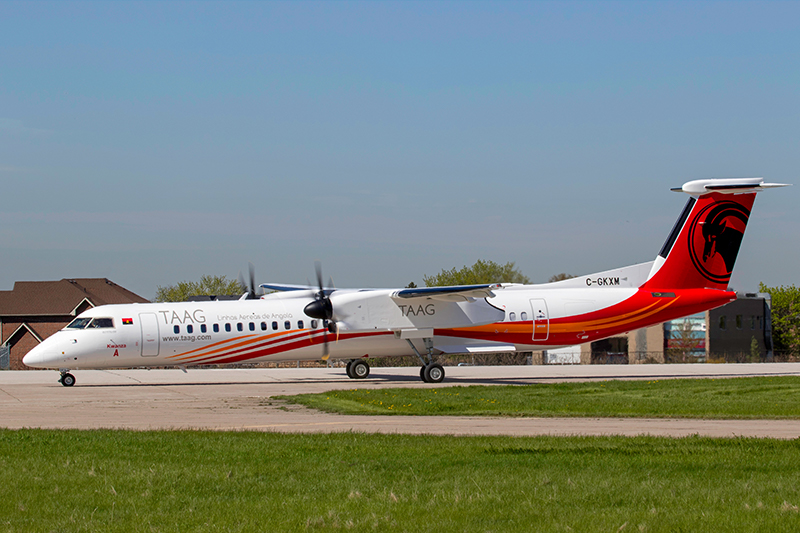 De Havilland Aircraft of Canada Limited delivered the first of six Dash 8-400 aircraft to TAAG Angola Airlines E.P, the state-owned, national airline of Angola. The order was disclosed on June 18, 2019 at the Paris Air Show.

At the Paris Air Show, De Havilland Canada also formally received the Type Certificates for the entire Dash 8 aircraft program, which parent company Longview Aviation Capital acquired from Bombardier, including the 100, 200 and 300 series and the in-production 400. The Dash 8 joined Longview’s portfolio of aircraft programs, including the Twin Otter program and the DHC-1 through DHC-7 series, as well as the former Canadair CL-215, CL-215T, and CL-415 waterbomber aircraft.

“We selected the Dash 8-400 aircraft to support our development of a stronger domestic network and also to support our regional and international networks,” said Rui Carreira, chairman and CEO, TAAG Angola Airlines. “With our acceptance of our first Dash 8-400 aircraft, we are continuing to implement our restructuring strategy and enhancing our service to smaller communities.”

Carreira continues to explains that the passenger amenities, operational versatility and economics of the Dash 8-400 will be critical for TAAG’s operations where large aircraft are not economical.

“Amidst the current health restrictions facing many countries and the need for efficient regional aircraft to restart air services, we have developed a remote delivery process to support our customers’ recovery efforts,” said Todd Young, COO, De Havilland Canada. “Regional aircraft are proving to be the most important tools to support market recovery and De Havilland Canada’s teams are standing ready to provide ongoing service solutions to support TAAG’s success.”